Why Do Small Dogs Have So Many Psychological Problems?

www.psychologytoday.com
(A brilliant website and well worth a visit!)

No other mammal on earth even approaches the variations in forms found in domestic dogs. The difference in size between a teacup Yorkie and an adult mastiff is proportionately larger than the difference between me and a bull elephant. Surprisingly, no one has looked at how the dramatic differences in size and shape of dogs affect canine psychology – until now.Size, Head Shape, and Delinquency
​
A research team headed by Paul McGreevy of the University of Sydney recently took this issue on, and their results appeared in the journal PLoS One  (here). They were interested in whether behavior problems in pet dogs are related to breed differences in height, weight, and most interestingly, the shape of a dog’s head; specifically, whether a breed is more “brachiocephalic” (wide-headed with a short snout, like English Bulldogs) or more “dolichocephalic” (narrow-headed with a long snout, think Greyhound). 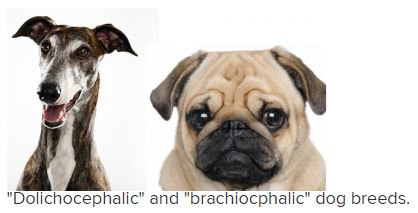 Despite the claims of the 18th century phrenologists, the topography of human skulls is not related to differences in our personalities. However, this is not the case with our four-legged companions. MRI studies have shown that artificial selection by humans has dramatically affected the shapes of the skulls and the organization of the brains of different breeds (here). For example, dogs bred for hunting and chasing typically have narrow heads and long noses. In contrast, selection for cuteness has tended to produce breeds with short snouts and wide skulls. This has resulted in dogs with babyish looks who act like perpetual puppies. (The retention of juvenile characteristics in adult animals is called “neoteny.”) In extreme cases, selection for small and cute animal companions has produced breeds in which the dogs’ brain cases are so deformed they resemble the skull of humans with hydrocephalus (here).

To determine a breed’s proclivity for behavioral problems, the researchers turned to the Canine Behavioral Assessment and Research Questionnaire (C-BARQ for short), a massive data base developed and maintained by University of Pennsylvania anthrozoologist James Serpell, one of the PLoS paper’s co-authors. The C-BARQ is a web-based survey in which owners rate their dogs on nearly three dozen behaviors, most of them problematic. Thousands of dog owners have now participated in this on-going research project. (If you own a dog, you can take part in the U Penn C-BARQ studies. Just click here.)

The McGreevy study was based on the C-BARQ profiles of 8,301 dogs representing 49 common breeds. The owner of each animal rated his or her pet on nearly three dozen irritating, disruptive, or destructive behaviors. These included aggression, persistent barking, chewing, stealing food, hyperactivity, “mounting,” escaping, and coprophagia (eating poop).

The results were striking. Various combinations of height, weight, and head shape were significantly related to 90% of the negative C-BARQ behavioral traits. Further, in nearly all cases, the smaller the dogs, the more problematic behaviors their owners reported. Here are some examples.

Height – Short breeds were more prone to beg for food, have serious attachment problems, be afraid of other dogs, roll in feces, be overly sensitive to touch, defecate and urinate when left alone, and be harder to train. They also were more inclined to hump people’s legs.
Weight – Even when height was controlled for, lighter breeds were more excitable, hyperactive, and more likely exhibit “dog rivalry” than heavier dogs. They were also more apt to run away from home.

Head shape - Head shape did not predict as many categories of canine delinquency as size. It was, however, related to some problematic behaviors. Long-nosed dogs were more prone to inappropriate chasing and to show fear of strangers. Dogs with short noses and wide skulls were more apt to attack other dogs. In some cases, combinations of height, weight, and head shape predicted the prevalence of behavior problems. For example, short dogs with long snouts were particularly apt to persistently bark and be fearful around strangers. Heavy breeds with long snouts were likely try to steal food off of your plate.

The bottom line is that for nearly all of the 30 C-BARQ behaviors related to body size, small breeds were reported by their owners to have more problems than large breeds. The authors summarized their findings elegantly: “Generally, undesirable behaviors become more common or pronounced as height and weight decrease.” In sum, small dogs tend to have psychological problems.

From snapping at imaginary flies to biting their owners, small dogs often come with a lot of psychological baggage. McGreevy and his colleagues suggest half dozen possible reasons. Some of these are related to nature (genes) and others to nurture (environment). First, nature. Bad behaviors in small dogs typically cause less damage than in big dogs Thus people who love small dogs tend to tolerate bad behaviors in their pets. Take biting. If the researchers are correct, genes associated with aggression against people would be more likely to persist in small breeds than large breeds. This idea is supported by an earlier C-BARQ study which found that Chihuahuas and dachshunds were the breeds most likely to attack people (here). (Pit bulls, by the way, ranked in the middle of the pack; they were about as aggressive as poodles.) Another biological hypothesis is that behaviors such as begging, attention-seeking, and urination in small dogs are unintended genetic side effects of selection for genes that code for both infantile appearance (cuteness) and immature behaviors.

However, McGreevy also points out that the bad behaviors seen in small dogs could be the fault of owners rather than genes. For example, hyperactivity in small breeds could result from the dogs not getting sufficient exercise because they are kept indoors too much. And, owners of small dogs may tend to overindulge their “babies” and inadvertently reinforce behaviors such attention-seeking, jealousy, and begging.

There are, of course, other spins on the small dog problem. For example, my colleague David McCord, an expert on personality measurement, says that on the Big Five Personality Inventory, small dogs would tend to score high on Neuroticism and low on Conscientiousness and Agreeableness. My wife says they suffer from a “Napoleon Complex.”

Important Caveat! If you are devoted to a small dog, keep a couple of things in mind regarding this study. The first is that C-BARQ scores are based on owners’ perceptions of their dogs’ behaviors, not direct observations by researchers. The second is more important. These results are statistical generalizations based on samples. McGreevy is not suggesting that all small dogs are psychological basket cases. My parentslived with a succession of Dachshunds named Willie. The dogs were all wonderful and they enhanced my folks’ lives tremendously.

But, if you have a small dog that is hard to live with, check out this excellent advice column from the ASPCA.

For more on dog personalities, watch this interview with one of my favorite psychologists, Sam Gosling.
​
For "hot off the press" research showing that humans preferentially select (adopt) dogs based on baby-like features (paeodmorphism), see this articleby a team of researchers headed by Bridget Waller of the University of Portsmouth.
*     *     *     *    *     *
Hal Herzog is Professor of Psychology at Western Carolina University and author of Some We Love, Some We Hate, Some We Eat: Why It's So Hard To Think Straight About Animals.