To Err About Canines is Human.. Common Misconceptions About Dogs 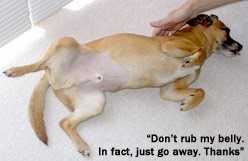 ​I've listed a few of the common misconceptions or errors-in-thinking about dogs that I've run into in my years as a pet dog trainer: The following statements make me launch into a prepared speech which I've included for you below so that you too can have a speech to share with others when you hear these phrases. (But you might want to be more tactful than I am below <grin>.)

"It's a good idea to get two littermate puppies and raise them together so that they won't be lonely"
This generally backfires in a big way as you have twice as much puppy pee and poop to clean up and twice (or three times) as many puppy chewing and nipping and barking. Also, the two dogs can get so bonded they don't care about human company much or end up fighting because they become competitive with each other. One puppy at a time is definitely a good rule!

"My dog is always hungry so I feed him more."
This will lead to an overweight dog in almost all cases. Dogs are scavengers and as such they seem to have been biologically designed to be ready to eat whenever food presents itself and keep eating until they pop (literally). It's a good idea to watch your dog's weight very carefully and adjust the food intake as necessary to make sure you can feel your dog's ribs and he or she keeps a "waist".

"I feed both of my dogs out of the same bowl because they get along well"
Wow, what mellow dogs you have! Let's keep them that way and feed them out of separate bowls! Most dogs will eventually fight over food or eat too much or not get enough if fed out of a communal bowl.

"I crate my two dogs together because they get along well"
This can work for short periods for adult dogs that get along well, but for longer periods or younger dogs it is best to get a second crate so that they can both be comfortable and not have any arguments in the tight space.

"My last puppy was not this difficult!"
Everyone says this! I think we forget how difficult they were or if they were raised by our parents it definitely seems easy in retrospect.

"My puppy stays by me so I don't bother putting him on the leash when we are out."
Puppies do stay close by naturally but just wait until your dog is a bit older and look out! This is why young untrained dogs should stay on the leash because we never know when they are going to get the wanderlust! And of course, start training your dog to come to you - it is never too early (well I guess you need to wait until they can walk!).

"My new dog doesn't bark at all"
Famous last words! Most dogs don't begin barking until about 6 months and most adopted dogs have a honeymoon period in which they do not bark for a couple of weeks.

"I don't need to worry about socializing my young dog because he is always fine around people."
Dogs don't tend to exhibit aggression until about age 1.5 years. Before that you will notice some small problems like shyness. Gentle socialization can help prevent this.

"I don't feed my dog people food because I don't want him to beg."
First, people food is food. Second, you get what you reward. If you reward for polite behavior the begging will cease pretty quick. Plus, dogs that don't know any better will beg for people food even if you didn't give him any of that food because they can smell it! I do agree however that is a good idea to be careful about what you feed your dog, not overfeed and not feed unhealthy foods.

"I don't train my dog with treats because I want my dog to obey me even when I don't have any treats."
Getting your dog to listen to you whether you have a treat nearby or not is a matter of being a little tricky and making sure your dog never can tell if you have a treat or not. For instance, I might ask my dog to be quiet in the house and if he does I can go to the cupboard and get him a treat. I don't need to have that treat in my hand and show it to him first, because we have had enough experience together that he knows a treat is coming if he listens. This is a matter of being tricky, practicing training and being consistent in rewarding your dog for good behavior. It is also a matter of making sure you do not rely on the luring phase of training too long. I suggest that people go from luring something like a "sit" to using the same hand gesture with "empty fingers" (no treat but it looks like you have one), and then feed your dog a treat after sitting. This can easily transition to a hand signal with a reward afterwards.

"My dog rolls on his belly because he loves to be petted there."
This could be true, but it could be true also that your dog is a little nervous and so "submits" by rolling on his or her back. If you think this may be the case, the best idea is to give your dog a little break from interaction.

"My dog wants to go out of the doorway first (or pull on the leash) because he is dominant."
Nah, he probably just is like all dogs and for some reason excited about going out of doorways. You just never know when there will be a squirrel on the other side I guess. It's a good idea though to ask your dog to sit and wait to be released to go out of the doorway.
​
I'm sure there are lots more. Want to add some? Add them in our comments box!
Happy Training!
~Jess