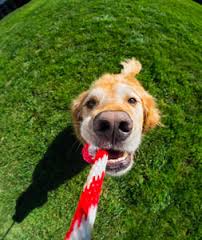 Ripping out plants, pulling bedding out of kennels or tugging on your couch is very enjoyable for your dog.
The tug-stimulation they get from these behaviours are intrinsically reinforcing; so why not provide appropriate alternative outlets for the dogs enjoyment, rather than letting the dog reward himself in the form of unwanted behaviours.

A lot of trainers advise us not to play tug because it can teach him to be aggressive or to be ‘dominant’. However a daily structured -tug-game is not only a great energy diffuser, but it can also teach him to control himself, teach good bite-inhibition and he learns to comply with commands while aroused, which is something a lot of dogs struggle with. The added bonus to us is, that the dog gets his tug stimulation form us and not from the environment. In the context of play, social limits and rules are much more readily accepted and incorporated into everyday interaction.Play promotes a sense of joyful harmony and trust between people and dogs and stregthens the relationship.

There are however a few rules that need to be implemented to ensure safe tug games between owners and their dogs:

1 Have a nice long rope toy to prevent the dog from accidentally grabbing your hand.

2 The tug toy is the only tug toy and is kept away and only brought out for tug-sessions and put away afterwards. Tug is not played with other toys or items such as ‘stolen items’ i.e. socks or clothing.

3 Teach your dog a reliable ”take-it” and ”give” cue. Don’t allow him to jump up at you and try to grab the toy before you have given him permission to take-it. Ask him to ‘sit’ and wait for him to calm down before resuming.

4 If he does not comply to ‘give’ then you need to do more seperate training sessions in which you teach ‘give’. During play his reward for giving/letting go is the opportunity to tug again.

5 If he grazes your hand with his teeth, say ‘ouch!’ and turn your back to him and ignore him for a few seconds. This way he learns if he bites your hand too hard, the fun stops. Resume play after about 10 seconds or wait for him to calm down first.

6 Occasionally you could let him win.

7 Play growling is allowed. Some breeds such as Staffies and other terriers make gurgling-growly sounds, that can sound pretty startling to someone that is not familiar with the breeds. Any serious growling, or refusing to let go of the toy ends the game immediately.

8 Small children should not be allowed to play tug as they cannot consistently keep to the rules to ensure the dog’s arousal levels stay low, they can be pulled over and might not be strong enough to ‘win’ most of the tugs. Adults should keep the game at calm enough levels so that the dog can still comply with the cues.

9 Besides being a fun activity for you and the dog, it also teaches him a few things, in a fun way!

10 Play is a great activity to bond with your pet and him to you!