Why Do Dogs Eat Grass?

by Dr. Jean Doddd's. Pet Resource Blog. Dr. Dodd is considered one of he foremost experts in pet healthcare and focuses on vaccination prorocols, thryoid issues and nutrition. For more information and some great resources visit www.hemopet.org and you can even subscribe to the newsletter, which is well worth it. 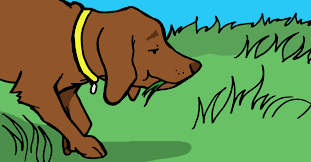 “Why do dogs eat grass?” My veterinary colleagues and I are asked this frequently and we honestly do not know the exact reason or reasons. To try to answer this age old question, a few studies have been conducted.

​Researchers at the University of New England in Australia compared two sets of dogs. One set of dogs was given a diet supplemented with fructo-oligosaccharide (FOS), which temporarily can induce loose stools and mild gastrointestinal (GI) distress. The researchers observed that the group not fed the FOS diet and with normal stools actually ate grass for longer periods of time. In this particular instance, the team determined that dogs apparently do not eat grass to self-medicate for this form of GI distress. They were quick to note, however,  that grass eating may occur for self-medicinal purposes for other types of potential GI disturbance episodes. Importantly, this team of researchers only observed two vomiting episodes after grass eating, which led them to conclude that dogs do not eat grass to induce vomiting.

Another team of researchers at the University of California, Davis conducted three separate surveys. Their hypothesis was, “Most plant eating in dogs is associated with illness or a dietary deficiency and that ingestion of plant material is usually followed within a few minutes by vomiting.”

First Survey – Veterinary StudentsSecond Survey – Teaching Hospital ClientsThird Survey – Web-Based
The survey from the team at UC Davis asked specific questions relating to diet. They determined that diet – which varied from kibble to raw – did not impact the plant eating. Additionally, dogs receiving less fiber in their diets did not tend to eat more grass than dogs getting more fiber.

They concluded, therefore, that grass eating is a common behavior in apparently normal dogs that is unrelated to illness or vomiting. Of course, their caveat was that a subclinical GI distress may provoke grass eating occasionally. Indeed, pet caregivers that have contributed to our NutriScan Case Studies have stated that before the food sensitivity testing was conducted, they believed their dogs ate grass to calm their stomachs. After adjusting their diets according to the Nutriscan results, caregivers noted that the diet change helped curb or stop the grass eating habit.

The UC Davis team’s current hypothesis is that plant eating helped our canine and feline ancestors purge nematodes (intestinal parasites). This habit has been observed in chimpanzees because the plant leaves increase bowel motility, can wrap around the nematodes and thus flush them out of the body. They also correlated this hypothesis with younger dogs eating plants more often than older dogs because they are less resistant to intestinal parasites. This fascinating theory truly needs to be studied. And who knows? Perhaps we could replace some conventional dewormers with plant-based options. Please note: this comment is not meant as a suggestion that you give your dogs plants in lieu of intestinal dewormers. We need to wait for research clinical trials to be conducted.
​
In the meantime, let’s just let your dog do what comes naturally.