We are absolutely delighted to have Pin Oaks ​as the sponsor who is helping us to take these courses throughout SA.  They share the same passion for dogs as we do, and this shows in all their services and products which are beyond compare. Do have a look at their website and support them for supporting the dogs in the shelters, and helping to improve both their quality of life and make them more adoptable - your dogs will also benefit! www.pinoakskennels.co.za Thank You to Michael, Doreen and the Team!
​

Punishment has no place in the teaching phase of a dog's education! 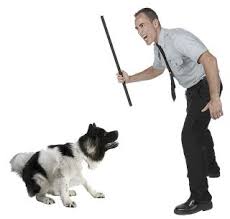 Reinforcement can take many forms, click and treat, saying " good dog", a pat on the head, a short game of fetch. No matter what the reward, the behavior connected with it will get repeated. If we wish to perpetuate good behavior we must reward it in some shape or form.

As dog owners we tend to think of our dog's behavior in terms of what we don't want the dog to do; not jump, not pull, not run away. Instead, we should define what we what our dogs to do instead; sit, walk by our side, come when called. Often times because there is no clear behavior that gets rewarded, dog owners resort to punishment in the effort to get rid of the behavior they don't want.

The problem with punishment is that it is only half of the equation. Punishment stops the dog from doing whatever he was doing at that moment, it does not teach the dog what you wanted him to do instead. In fact if you only punish a dog without rewarding him for what you want instead, the dog will adapt to the punishment and revert to the old behavior. Punishment has very limited uses because it usually requires that we deliver the correction at the moment the dog is doing the wrong thing. Most of us can't move that quickly, and the dog gets away with the behavior when we are not present. We then begin the vicious cycle of increasing punishment to try to catch the dog doing the wrong thing. All this effort to punish the dog and we still haven't taught him anything !

Our efforts as teachers, trainers and companions to our dogs would best be spent reinforcing the right behavior rather then punishing the wrong one. Training collars like choke chains, pinch collars and head halters (gentle leaders) are just training aids. Their purpose is to help manage the dogs behavior so that he can be right more often and get rewarded for it. Used incorrectly, they become a game of jerk on the dog, dog repeats the behavior. This becomes a literal black hole of paying attention to the wrong behavior and no real learning is accomplished.

A dog who is not reinforced for walking next to you on for instance may learn not to pull but only when wearinga pinch collar. With the collar on the dog may learn that pulling is not a good idea but when the collar is off he reverts back to his old behavior because it works.. He goes places fasten when he pulls on his leash.

Leash corrections with or without a training collar manage a behavior like pulling and help us control the dog but that is all, they do not teach the dog to heel. In fact some dogs with big thick necks and a high pain tolerance will still pull while wearing them. The bottom line is if you don't reward the dog for not pulling the dog will not learn to walk next to you. He may learn to avoid correction, but he won't have a clue as to what you really want.

Head halters, gentle leaders, and other training head collars help control the head and therefore keep the dog from pulling. These do not require any corrections and are a more humane alternative to repeated corrections with a training collar. This again is a training aid, a way to manage the behavior of pulling while you reward the dog for not pulling. Honesty about what we are really teaching is very important if we are to fix unwanted behavior. Punishment really has no place in the teaching phase since we have not yet explained to the dog what we want him to do instead. Training collars and head halters may keep you from being knocked down by your dog on a walk, but they only manage the pulling they do not teach the dog how to walk on a leash.

Punishment is rewarding to us as dog owners because we feel as though we've at least done something ! It is gratifying to us at least at first because the dog temporarily stops the behavior we don't like.

Punishment has a price however that few people take into consideration. That price involves a lack of control over what the dog actually learns when he is punished. A dog that growls at children and is punished with a slap or collar correction may stop growling at children but still be fearful of them.

Punishment in this case has made the aggression worse because we have suppressed the warning that the dog is not feeling comfortable and skipped right to the bite. If we then punish the dog for biting, we have in effect taught the dog that children are even more scary than he thought and he must bite harder, faster to avoid correction next time. These type of dogs start to believe the best offense is a good defense. All this energy has been expended and all we've accomplished is a better biter ! No amount of effort has been used to address the dog's real reason for biting....he's uncomfortable or fearful around children.

How much better if the punisher had spent time rewarding the dog when children were nearby in a happy voice with plenty of treats and at a distance. How much safer for child, trainer and dog if the punisher had spent his time rewarding the dog for not growling, lunging or snapping and made the sight of children mean good things were about to happen.

Overall, punishment is only half the equation, it has no place in the teaching phase. If it is used to manage behavior the right behavior must be rewarded instead. Most importantly, punishment should not be used in cases of aggression because we never know what the dog is learning. There is a better way to train your dog.............find it !

You may also enjoy...

Aggression and some reasons behind it
This article is copyrighted and remains the property of the author. Individuals are welcome to print or copy same for their own use in furthering their knowledge of dogs. However, no reproductions or alterations/variations are allowed without the express written consent of the author.