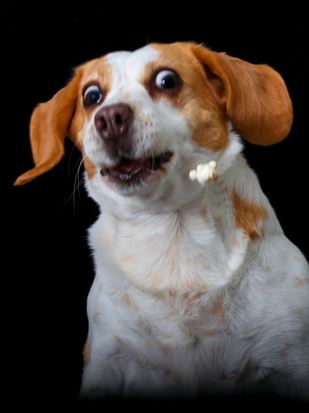 Ariel is an 8-year-old female Beagle. I was asked to work on her to strengthen her hind legs, especially the left one, which seemed unsteady and sensitive following a cruciate ligament operation. The problem was diagnosed in June 2016, and the operation performed the following month. Since then, although the vet was happy with the outcome of the operation, Ariel sometimes finds it difficult to jump (on the couch, for instance), and snaps at the other dogs when they play a bit too rough around her, as if she was scared that they might bump into her and hurt her. She sometimes also shows a slight limp after getting over-excited when playing.

Ariel has not undergone any other operations, and has not suffered from any specific illnesses. She has however experienced emotional distress on several occasions: she was given up by her owner, a breeder, and thus separated from her breeding mate, when she was 3. At age 4 ½, she was given up again and adopted by her current family.

Session 1:
We formulated the following goal for Ariel: I can jump on the couch easily and comfortably. Ariel’s owner felt that Ariel being able to jump comfortably on the couch would indicate that her hind legs were stronger and that there was less pain.

The emotion in relation to the goal was Intolerance, directed at other dogs. This may be explained by the fact that Ariel sometimes snaps at the other dogs when she feels crowded by them, particularly when they play too roughly around her. She seems scared that they are going to bump into her and hurt her hind legs.

Pre-activities: Watched Ariel as she moved around the room and interacted with the other dogs. Her hindquarters seemed a bit weak and she found it difficult to jump on the couch at times. At some point, the other dogs got excited and started “horsing around”, at which point she snapped at them.

In present time, it was established that Ariel needed 1) mental stretching and stimulation, 2) adequate pure water in the diet and 3) more personal space. The corresponding emotion was Fear. This emotion makes sense in relation to the need for more personal space. Ariel gets nervous when the other dogs play around her, as she is scared they are going to bump into her hind legs and hurt her. It was also necessary to strengthen the Pectoralis Superficialis muscle

The age recession took us back to age 3. Ariel used to be a “breeding bitch”, and, at age 3, the breeder gave her up, separating her from her breeding mate.

The muscle testing showed that the dominant emotion in connection with this time in Ariel’s past was Depression. I used the Emotional Stress Release technique to help Ariel release the stress related to this event.

Stress also showed in relation to separation and to assurance.
Ariel may have felt unloved after being given up three times in a row and seems to still be suffering from being separated from her breeding mate. When it comes to assurance, Ariel often looks to her owner or to one of her mates, Solomon, for reassurance. Snapping at the other dogs may be a way for Ariel to assert herself.

After this balance, there was no longer any stress around the goal and initial emotion. All in all, the stress had reduced to 6% and the life energy had increased to 73%.
Home reinforcement/support needed to maintain the balance: 2 drops of citrine essence once a day for two months.

This balance was quite emotional, especially the age recession. Ariel gave us regular “feedback” through eye contact, tail-wagging or reaching out for us with her paw. To me, the central theme of this balance was the loss of power and self-worth. The weakness in Ariel’s hind legs may be a physical manifestation of this loss of power.

Ariel has been doing well: She has been very loving and playful with the other dogs and has been jumping on the couch (although she still looks to her owner to lift her at times). She got her water fountain and happily drinks from it. She has her quiet space in the house and makes it very clear to her owner when she needs some time out, by sitting in from of the door of the room.

Although a follow-up was necessary for “I can jump on the couch easily and comfortably”, this goal did not show at the start of the follow-up balance. So, in the light of the information that had come up during the previous balance, which pointed towards the fact that Ariel felt, or had felt, unloved, we decided to work with the following goal: “I trust that I am loved”.

The emotion in relation to this goal was Co-dependency towards Solomon and Bailey (two of Ariel’s mates).  Ariel’s owner had noticed that Ariel and Solomon were very close. Solomon is the “healer” among her dogs and will always step in to soothe an anxious or sick dog. He and Ariel sometimes spend hours lying together and grooming each other. Ariel seems to have a strong bond with Bailey too, although maybe not to the same extent.

In present time, there was reactivity between the Supraspinatus and Fascia lata muscles (meaning that Supraspinatus was “switching off” Fascia lata when activated).  The emotion in relation to this was jealousy, coming from some of the other dogs Ariel’s owner takes care of. Ariel has received some “preferential treatment” since her first balance, which might have triggered some jealousy on the part of the other dogs.
​
Intolerance from Ariel towards other dogs came up again. Frontal/occipital holding was required.

The age recession took us back to age 1. Ariel was owned by a breeder at the time, as a breeding bitch (see age recession of first balance). Ariel’s current owner knows very little about what might have happened when Ariel was one year old. It is possible that she already had her first litter. Stress around separation showed, as was the case in the previous balance. Maybe Ariel was separated from her puppies too early?

After this balance, there was no longer any stress around the goal and initial emotion. All in all, the stress had reduced to 0% and the life energy had increased to 99%.
No follow-up balance was required in relation to this specific goal. The muscle testing showed frontal/occipital holding was necessary to make the balance complete.

The balance pointed towards unresolved emotional stress in Ariel’s past, as was the case in the first session.