​​​​​​If you want to do Clicker training or teach your dog tricks, we have 2 great options for you to choose from. We also have a huge variety of top name, top quality dog toys to suit even the fussiest pet, as well as toys for cats and your small critters. It does not stop there - we have just about everything else you will need for your pet, including the small critters. www.mcmac.co.za 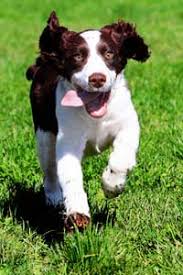 The Recall is one of the most important behaviors, yet, it is the one that is often the most unreliable. Many puppy owners notice happily that their puppy always (or almost always) seems to come when called, so they think they have that one covered & train no further for it. However, just about every young puppy naturally hangs about the leader and comes easily - it's a survival thing. But when they hit adolescence? Suddenly, the rest of the world is a whole lot more interesting than you are!

You might be surprised to learn that you have already begun training for the recall when you did all of that attention work. Now, the second step is the most fun of all. You simply play recall games with your dog! We call the first one "Puppy in the Middle." You'll need another person for this, a buckle collar (which means a regular one, not a prong or choke of any kind) on the dog, and a bag of treats for each person.

Person 'A' kneels & holds the dog gently by the collar and pets him. Person 'B' kneels down about 6' away and calls the dog. He should say his name first & then the command (use whatever you have been using at this point, perhaps "C'mon".) If the dog comes, then Person B takes hold of his collar & makes a big fuss over him - praise & treats & pats. If the pup is too interested in Person A to respond to Person B, then Person B gets up, walks over to pup, shows him the terrific treat he had, and essentially lures him over to where he called him from. After the pup is with Person B, Person A calls him. Then Person B calls him. Back & forth, back & forth. This is a game - so keep it fun!! Be sure to hold onto his collar until the other person calls but it's okay (in fact, desired) if he is straining to go! Keep the game sessions short & fun but play it frequently! Several times a day if possible. When the pup has the concept, begin moving farther apart. Stay in his sight for quite awhile, but eventually this game turns into Hide & Seek. At that point you should also add all other family members, each with a bag of treats (just work out something so 2 people don't call the pup at once!). A really good idea is to give your dog his dinner this way. Simply divide his food amongst yourselves & play the game until it is gone.

Troubleshooting - don't have anyone else to help out with the games? You can play them by yourself - just drop a few small treats on the floor and when your dog is busy gobbling them up walk 6' away then call him. Then put more treats on the floor & walk away again, etc.

As well as playing this game, start calling your dog lots in the house (or anywhere where he isn't faced with much distraction. You don't want to overstrain that new muscle & damage it, do you?) Always call when you are sure he will respond - like at dinnertime! Call him for no reason other than to give him a treat and then let him go. You want to instill in him the belief that Coming When Called is always a WONDERFUL THING!! Many people make the mistake of, without thinking about it, turning the Come command into a negative thing for the dog. If you use it mostly to bring him inside when he was playing, or when you are ready to leave the park & go home, then that word, to the dog, means The End of Fun. You want them to think it is the best possible word he could possibly hear in his day. So... never never never call your dog over for anything unpleasant (like bath time) or to end anything really fun (like playtime in the park.) Eventually you will be able to use the command in the park, as needed, (because by then he will think that coming over to you IS a pleasant thing) but don't ever go back to calling him for a negative thing. Go get him for bath time!

Play the Puppy in the Middle games for a week or two before beginning the next steps. However, you need to continue playing those games for quite a while - in a variety of places - as the game is what is really doing the training.

So far, you have been playing the games using your "Informal" recall signal. Now your dog is going to learn a "Formal" signal. The difference? The informal one (let's say.... "C'mon") is used when the response doesn't have to be immediate. Maybe the dog is on the backyard & it's dinnertime. It's okay with you if he takes another sniff or piddle on his way in. That's when you use the informal signal. You may also repeat this one since it is no big deal. But now, you will need to choose a formal signal. I like COME ("Sugar Bear - Come!") but if that is already your informal one then you'll need to choose another. COME NOW is good, or TO ME, or FRONT... whatever you like! I highly recommend also teaching a whistle signal as well - this is more likely to work in an extremely diostracting situation.

Practice the Recall with your formal command at this point ONLY when you are totally sure of the correct response. Good opportunities are at dinner time & when playing the games (start out with the informal command to warm him up, then switch to the formal one once he's really going). Bad times would be anytime when there are distracting things around such as in the backyard or in the park. You really need to wait until the behavior is strong enough for those. Otherwise, every time you call him & do not get the correct response, you are actually diminishing the strength of the command.

Also important is prolonging your dog's pleasure in having responded to you. So don't just toss him & treat & walk away. Sit down with him & break that treat into many little pieces & give them one by one. And save something absolutely wonderful for this exercise - leftover steak, perhaps? Or have his favorite toy instead (perhaps a ball or rope toy or a Frisbee) and spend several minutes (at least) playing with him.

While working at home, it's important to start being very variable with the treats/reinforcements, but still keeping them amazing. And although you initially let the dog know that you had a treat before calling him, you need to phase that out. Call him often in the house, then RUN to get a treat (or toy) from another location! This will prevent him looking to see if you have a treat before responding. You want the response to be instant!

In higher level classes we really up the distraction level to include another person kneeling on the ground about halfway between the dog & the owner. As the dog races by, this person distracts (either by just being there, by calling "puppy, puppy", or by holding out a treat - all depends on what each dog is ready for). Then we include the rest of the class as eveyone lines up about 10' across from each other (dogs included) and one person & her dog practice the recall running down the middle, first with just the distraction of the other dogs & people, then with the people calling, "Puppy, puppy!", then with the people offering treats & calling as the dog races by. Of course, if the dog were ever to try to take a treat from one of the distracters, she must be sure to not ever let him have one!

You can also really strengthen your dog's Recall by practicing it at the park, even around the rest of the dog pack that he might be playing with. First, be prepared with incredible treats and/or toys. Then when he is playing, walk right up to him, stick your treat/toy right under his nose & call him "Max, COME!" while you move backwards 6' or so, luring him along while praising the whole time, then giving him the treat. Do this frequently! Eventually you will be able to start farther & farther away from him. But do be sure to practice it often so he associates the word "COME!" with terrific things, even at the dog park. Many dogs will start to "check in" on their own which should of course be encouraged witha treat! When you are finally ready to go home, he won't be sorry to hear that word since he won't think it means leaving his friends.

Now, a bit more detail about the two different signals. The formal signa; is used when the dog must come straight to you right away! Eventually it is also helpful to have him sit upon reaching you but only after the recall is 100%. You may NOT repeat this signal! Therefore, don't ever use it until you are sure of it. Practice it inside or on a long leash outside. Use the formal signal when playing the games from now one if he is reliable with them. Use it at dinner time! Any other time, use the informal signal. It's freezing rain outside and you are not inclined to go get him if he doesn't respond? Then don't use the formal signal. Of course, over time & with practice the formal signal should become very solid. THIS is the signal you will then use in an emergency... dog takes off after a squirrel and is heading for the street... "Max, COME!". And if you spent enough time strengthening his response with the distraction training, Max will indeed spin around & come to you! Be sure to practice plenty of fun recalls - both formal & informal.