​The importance of daily play time and dog toys

www.petsworld.com - Has a great Blog with interesting article - enjoy!
​Dogs like humans get bored easily and must be busied in activities that lead to a healthy body and happy mind. In the same way dogs require both physical and mental stimulation to banish idleness and the negative behaviors associated with it. Therefore monotony haunts humans and their pets alike and needs serious attention in either case.

However talking about a pet dog and a plethora of bad behaviors it can display due to lack of exercise and stimulating games include biting other dogs and humans, jumping, restlessness, anxiety, biting into furniture and other items within its reach, unnecessary barking, house soiling especially when alone, also unnecessary licking and nibbling on different parts of its own body such as feet and legs.
Needless to say exercise also diminishes the odds linked to weight issues and diabetes. 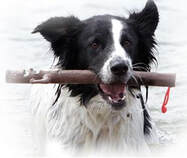 A good game of Fetch, increases bonding, obedience and of course is great fun!
​Let’s delve a little deeper and discuss how mental and physical stimulation can help your pet dog ‘fit the bill’ in terms of being an ideal pet that wins approval of both humans and its counterparts.

Exercises help to channelize the pent up energy in a desirable manner. In case a dog is not provided with suitable games to satisfy its natural quest for exploration and solving puzzles then on many occasions you will find it embroiled in destructive activities such as aggression and other unsuitable behaviors mentioned above.

Exercise here refers to both physical as well as mental activity and games can help a great deal in this!
​
Choose games that are enjoyed by your pet and may involve running, swimming, playing with toys such as balls and fun activities that require the dog to search for treats hidden by the owner. Also in place of treats the owner can hide and then call out for the dog indicating it to start the search. A game of hide and seek is also an excellent way for dog to use up mental energy.

Interactive toys for dogs  not just help in entertaining the pet but also help to build an ideal relationship between the dog and its master. Fetch is one such game where you can reward the dog each time it lets go of the object in picture.
​
The game of Tug is considered by trainers to be a great tool for obedience training, where the pet learns self control. Though avoid this game if your puppy is teething. In this game a tug fleece toy or a one feet long (or lengthier) flexible rope is used. After getting hold of an appropriate tug object, signal it at your dog indicating it to grab the center of the toy and not your hand. Here you are in charge of the game and once your dog has attained sitting or lying position use a cue word permitting your dog to go for the object and continue the tug of war for close to twenty seconds where both you and the dog pull on to the toy in either directions as well as up and down. To stop the play session you can stop pulling the toy and lightly grab hold of the collar of the dog (along with this action a cue word can also be used), the dog will eventually release the object as you have anyways stilled. You can also store a few treats in your pocket that can be offered to the dog, luring it to release the tug object. You can invite the pet to start the tug session again. This way the pet associates the release with resuming the play and this is rewarding to the four legged companion. Also you may end the game if the dog grasps your hand instead of the toy, this could be purely unintentional but still ending the game is advisable. Sometimes the dog may grab your shirt/clothes that should also without delay result in closing the play session. Do not scream at your dog for it to follow an order and calmness is especially required with younger dogs. 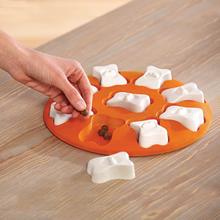 Puzzle toys are brilliant for dogs. Increases concentration and solving abilities, brilliant mental stimulation, increases bond with owner and helps to reduce behaviour problems when combined with behaviour modifications
Puzzle toys can be stuffed with treats, kibbles, dog biscuits. The pet will have to spend a good deal of time with the toy pushing and jostling it to dole out the delicious food.

Chew toys work on a similar concept but here the dog is required to chew up the toy to get to the food stuff.

Caution must be exerted while choosing the size of such toys as neither its jaws nor the tongue must get trapped in the opening of the toys. Selecting the right size and kind will help in keeping your dog amused and healthily busy.

Also raw-hide bones (another form of toy) can be offered to the canine. This is not just a tasty treat but equally engaging. It is important to proffer some appreciation and attention when they are engrossed in play, as this will encourage its interest in the item.
​
You can also invest time in teaching your dog a few tricks; this helps in enhancing the canine’s problem solving skills.

The key to attaining an ideally content & composed pet is to give it the right amount of exercise daily. This must involve interactive play sessions with the owner and play time with diverse toys, some of them may help it in gratifying its urge to solve complex puzzles. A canine should be presented with opportunities to exercise its mind and body for at least two hours each day.
It is important to note that invigorating the mind is as important as physical activity, therefore games that involve puzzle toys and problem-solving techniques need to be incorporated in the daily regimen as they result in greater energy being spent. Such games become handier for dogs that were traditionally bred for hunting or guarding purpose.