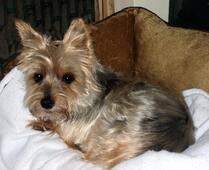 Pic Yorki rescue - if you are considering one of these lovely little dogs, do consider rescue first and foremost. Breed rescue does wonderful work in pairing the dog with the new home. if link below is not near you, please do search for a rescue that is. https://www.saveayorkierescue.org/
The Yorkshire Terrier is a small, toy sized dog with dark eyes and erect V-shaped ears. Their long glossy coat is fine and silky and falls straight down on either side. Coat colors come in a steal blue and tan colour, puppies are brown black and tan.

They originated in Yorkshire, England in the mid-19th century. They were bred to catch rats in clothing mills and mines and for rat-baiting. They also came in handy as hunting dogs, able to chase foxes, badgers and other small animals into their burrows. Rat-killing contests sometimes took place as a form of sport. The ferocious courage of the dog still comes to the fore occasionally when he barks at burglars or other dogs.

Over the years they were bred smaller, soon becoming fashionable pets and dog show standouts.

Personality
Yorkshire Terrier can be described as a little dog with a big personality. Their personality has been described among others as very confident, feisty, alert, inquisitive, energetic, brave, bossy, boisterous, adventurous and active, but they can also be very sweet.

They crave close physical contact and affection and need lots of attention and time with their family. Long hours of being left alone is not for them and they will follow you around the home like a shadow and curl up on your lap as often as possible. However it's not a good idea to over-protect your Yorkie, they can pick up on your feelings very quickly, and if your actions say the world's a dangerous place for them, they can become neurotic.

You must also keep in mind that they are terriers and in so being their prey-drive is high and they will chase any little creature that scurries by. So it is advised to be cautious with small pets such as rabbits, birds, rats etc, because of this breeds hunting instincts.

This breed is very protective about its family and they can sometimes be suspicious of strangers as well as aggressive toward strange dogs. They will bark at intruders and strange sounds making them good watch dogs but be careful as they can also become yappy and this can cause problems with the neighbors.

Yorkies can live anywhere from a farm to a flat, they are quite happy to be an indoor pet and is thus a good choice for city and apartment life. They make perfect companions for singles, families with older children and high-energy types.

They are a fairly active breed and do need exercise, a daily walk is sufficient to keep them healthy both physically and mentally. However, they should not be let off the leash in an unsecured area because of their innate hunting instincts as well as their tendency to pick fight with much larger dogs. They will also enjoy a good romp in a safe open area off lead, such as a large fenced in yard.

A very important thing to remember is that Yorkies are small and are thus very fragile dogs. You cannot play rough with them and you need to be careful when holding them or transporting them.

They are sensitive to very high or very low temperature so should be adequately protected. Many people paper/litter box train them so they don't have to take them outdoors when the weather is too hot or cold

No matter how many people or animals in the house, Yorkies will assert themselves, involving themselves in lots of hi-jinks that are mostly amusing and fun. This assertiveness usually comes across as self-confidence, not aggressiveness.

A Yorkshire Terrier is for you if you:

Only from reputable breeders! One can contact the The Kennel Union Of South Africa (KUSA) . They have a list of breeders who have puppies available.

Always try and meet both parents of the puppies. This is not always possible as the sire (father) may be an imported dog, but definitely ask to see the mother.

Please read our articles on how to choose a reputable breeder on the Puppies page. Alternatively, please do consider rescue.

Which other breeds are most compatible with the Yorkshire Terrier?

Because Yorkies have such big personalities the best companion dog for them will be one with a more docile personality. Herding breeds (such as the Collies), Mastiffs, Great Danes as well as Labradors and Golden Retrievers are all good choices. However Labradors and Golden Retrievers work best when they are already adults as they are very boisterous as puppies - big paws, not gentle or respectful of space (often ramming into things, people, other dogs). During this puppy phase (that usually lasts about 3 years) the Lab/Goldie can accidently hurt the Yorkie but once they have outgrown it they are great companions for Yorkies.

Another terrier breed is not a good idea and neither is a breed that likes to use their paws more during play, e.g. Boxer's. The dog may only be playing but for the smaller dog that means getting stomped on and possibly hurt.

Most definitely. This is the most ideal situation as they understand each other. Preferably have a male and female. Two females will also get along as long as they are introduced as puppies. An older female will get on with a puppy female but it is not advisable to introduce two fully grown females. Always have only one male unless you have a lot of experience handling dogs.

They can be suspicious of other dogs but if they are well socialized and trained from an early age they can get along well with any other pets. But keep in mind that they will also chase anything that runes away from them no matter how well they are socialized.

They may become possessive of their owners if a new pet is brought into the house. Being terriers, they may want to challenge the "intruder," and if a fight breaks out, the terrier spirit is to fight to the death. Take a lot of care when you're introducing a Yorkie to a new animal.

Because of their size, Yorkshire Terriers do better with older children who've been taught to respect them. Toddlers and small children often see the dogs as toys and then carry them around like dolls, this can cause the dogs to become snappish as they don’t like being startled, teased or handled roughly. There is also the risk for children to drop them, step on them, or hold them too tightly and being a toy breed these dogs can easily get injured. It is recommended that children always be supervised when playing with these dogs & puppies.

The Yorkshire Terrier is intelligent and quite easy to train, they strive to please and learns new commands quickly at an above average rate. However they can be difficult to housetrain but with persistence this can be done, crate-training is recommended.

However they can sometimes be stubborn if owners do not give the dog proper boundaries, it is important to set limits and be consistent. Because they are so small and cute people tend to let them get away with a lot more than they should, the dogs then assume that they are the boss of the house and they become very difficult to handle.

Start training when they're puppies, and you'll have much better luck than if you let them have their way and then try to correct bad habits.

Like all dogs, Yorkies needs early socialization--exposure to many different people, sights, sounds, and experiences--when they're young. Socialization helps ensure that your Yorkie will be a friendly, well-rounded dog.

The Yorkshire Terrier sheds little to no hair and is good for allergy suffers.   Show dogs who keep the long and silky coat need extensive grooming, daily brushing and professional grooming regularly.   For dogs that are kept as pets the owners get their coats trimmed short by professional groomers every few months and then it only needs to be brushed about once a week.   These dogs should be bathed only when necessary and must be dried properly after each bath. Their eyes and ears need to be cleaned regularly to avoid any infection, you should also brush their teeth regularly and schedule a professional cleaning by your vet at least once a year. Their nail and the hair around ears, eyes and paws should be trimmed regularly.   Remember as you groom to check for sores, rashes, or signs of infection such as redness, tenderness, or inflammation on the skin, in the nose, mouth, and eyes, and on the feet. This will help you spot potential health problems early.

Yorkies are generally healthy but because of their small size they are prone to certain health conditions including hip and joint issues, bronchitis, eye problems, obesity, poor digestion, tooth decay, bone fractures etc.

They sometimes suffer paralysis in the hindquarters caused by herniated disks and other problems of the spine. Falls or knocks can cause fractures of fragile bones. Abnormal skull formations in Yorkies measuring less then 20cm, dams often have trouble delivering puppies and sometimes need to have a cesarean

Yorkies tend to retain their puppy teeth, especially the canines. When your puppy is around five months old, check his teeth often. If you notice that an adult tooth is trying to come in but the baby tooth is still there, take him to your vet. Retained baby teeth can cause the adult teeth to come in unevenly, which may contribute to tooth decay in later years.

This dog has a tendency to gain weight quickly so should not be overfed and they can have delicate digestive systems and may be picky eaters. They prefer a couple of small meals to one big meal per day, Some dry food or bone should be given to it to chew to help keep their teeth strong and clean.

​ “In today’s age, with the rising cost of veterinary care, it really is a wise decision to consider medical insurance for your pets. Depending on the plan you choose, you can ensure that if your pet does develop one of the health issues the breed is prone too, that you will be covered –additionally, just knowing that any accident your pet may have will be covered, will out-weigh the monthly insurance fee for most pet owners. Our own personal choice is Genricpet as they have a ‘no limit’ policy and their rates are comparable to the rest of the industry. To find out the questions and things to look for in a Medical Insurance, please just follow this link”
Life expectancy