Why Dogs Can Take So Long to Poop!

by Friends of the Dog
​ 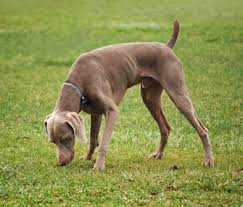 I think we have all been there - we are out for a walk and Fluffy decides it is time to eliminate - however, he does'nt just squat and do it - he circles, scents, changes his mind a few times, until the perfect spot if found and only then does he perform! Of course all dogs are different, however, the majority of them seem to engage in the behaviour mentioned above in varying degrees.

What causes this behaviour?

What most of us are aware of is that scenting is an instinctive canine behaviour, and involves a lot move that just defecating - they are leaving a lot of information on the ground for other dogs to read, just as they will scent any other dogs that have defecated in the area.

Defecating can also be territorial. Wolves would leave scent marks around the edges of their territory as a warning to other wolves to keep clear, and this type of behaviour can also be found in our domestic dogs as well.

What you may not be aware of however, is that research has also discovered that where a dog defecates is also tied into the Earth's magnetic fields!

In an article we came across by Justin Scuiletti, who is the digital video producer at PBS NewsHour, he says the following:-

Dogs use the Earth’s magnetic field when they’re relieving themselves. Not only that, but canines choose to do so in a north-south axis, a new study published in the journal Frontiers in Zoology says.

The study suggests that dogs are sensitive to small variations in Earth’s magnetic field. After examining 70 dogs — made up of 37 breeds — over two years, 1,893 defecations and 5,582 urinations, researchers found that under “calm magnetic field conditions,” dogs preferred to “excrete with the body being aligned along the north-south axis,” avoiding east-west altogether. Dogs were observed in a free-roaming environment, meaning they were not leashed and not influenced by walls or roads that would influence linear movement.

Why do the dogs prefer the north-south axis and avoid east-west? That was unclear, according to the study:

It is still enigmatic why the dogs do align at all, whether they do it “consciously” (i.e., whether the magnetic field is sensorial perceived (the dogs “see”, “hear” or “smell” the compass direction or perceive it as a haptic stimulus) or whether its reception is controlled on the vegetative level (they “feel better/more comfortable or worse/less comfortable” in a certain direction).
The scientists write in the report that the findings open “new horizons” for further research in organisms’ use of magnetic fields for direction, as well as magnetic fields produced by living organisms.