What IS My Dog Thinking?

(lovely website with lots of interesting articles - do visit, and enjoy!) 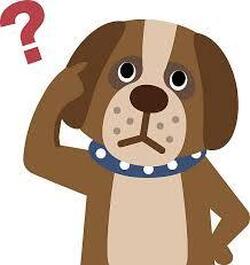 When clients are looking for dog training or a dog behaviourist, I’m often asked: “What is my dog thinking?” In fact it’s probably a question that dog trainers have been asked ever since cave men (or perhaps cave women!) domesticated the first wolf cubs and kept them in and around the home.

I read the other day that  humans and dogs share about 70% of their DNA.  Of course, it’s the other 30% that makes us so different. I’m not sure that there’s a correlation between similarity of DNA and similar behaviours but it’s an interesting analogy to help us to understand our dogs. Let’s say that in many ways we behave alike and in other ways we differ greatly. The trick, of course, is in understanding in which situations we differ and why. It’s the secret to good dog training.

You don’t need to be a dog psychologist or a dog trainer to understand how it works. Perhaps you’ve heard of Pavlov’s experiments? He rang a bell every time he fed dogs and eventually they salivated whenever they heard the bell. Whether there was food present or not. Psychologists call this Classical Conditioning. Interestingly, it affects humans too. I have a friend who was involved in a serious car accident. Now, whenever she hears screeching tyres, it sends a shudder up her spine. One particularly traumatic episode was enough to condition her fear response to the sound of screeching tyres. In this respect at least, dog thinking and human thinking works in a similar way.

Dogs and people have a LOT in common – but the differences between us are perhaps what give us the best clues as to what our ‘best friends’ are thinking. Let’s take one aspect of that. You’ll have probably heard the phrase “Dogs live in the now”. What does this really mean? Let’s consider an example: A man has a dog – let’s call him Fido – who is a very obedient dog and who always comes back when called in the garden but when they are walking over the fields, if Fido sees something interesting such as a rabbit, he runs off and comes back in his own sweet time no matter how much his owner calls. Sound familiar? When Fido does get back, his owner is angry and embarrassed and so he shouts at Fido, who cowers. He’s just been punished for coming back! Ironic, eh? The problem will get worse over time. (Incidentally, if you have a dog recall problem, I can help. Have a look at Dog Father On-to-One Dog Training.

Recall is a common dog training problem that I help clients with. (Other favourites include pulling on the lead – Here's how NOT to do it) At the heart of teaching recall is that dogs are different to us in that they do not equate the running after the rabbit (or whatever) with the shouting that sometimes happens after the event. If we were the dog, we might ask ourselves “What did I do to make him shout?”  “How can I avoid that?”– We might rationalise and work out the connection for ourselves. Dog;s don't.

Dogs, as far as we can tell, don’t think in this way. To them, it’s perhaps more like: “Rabbit = great fun; Coming back to Dad = bad news!” Fido’s owner might object, and point out that he “knows he’s done wrong because he cowers” but it’s not quite what it seems: He’s cowering because he sees that Dad is angry in this moment, and so he is afraid, naturally. What he doesn’t understand is WHY. He’s not making the connection to not coming back a couple of minutes ago. Is it any wonder that the problem is getting worse?

Look at it from the Fido’s point of view – “Running after rabbits is great fun”, a self-rewarding behaviour – but returning to Dad involves him shouting and looking pretty unhappy. It makes me scared and confused. So it’s no contest: Running after rabbits wins every time. Yay!” Incidentally, how we get around this kind of dog training issue is subject matter for a book, let alone a short article. Self rewarding behaviours can be tricky to correct and it may be that a little help from a professional dog trainer will go a long way if you have a dog training problem like this. I’m a good choice, incidentally 😉

The key point to remember is this: For your dog to make the connection between something they do and your reaction to it, so they need to see your reaction at the same time. For practical purposes, let’s take this to mean within two seconds. Your reaction might be positive or negative depending on the situation (“Good boy/girl” or perhaps “No!”), but for it to have any chance of being a learning experience, you absolutely must make it immediately. Conversely if you ‘missed the boat’ like Fido’s owner, the best thing to do is often nothing. It won’t fix the problem, but at least it won’t make it worse. Which is what usually happens of course.
So if you want to help your dog to understand you, stay in the moment. It doesn’t come naturally to us, but it’s easy with a little practice!