annum
What Do Dogs See in Mirrors?

They're not looking at themselves, but mirrors aren't meaningless to dogs
​

https://blogs.scientificamerican.com
(some great articles on a multitude of topics!) 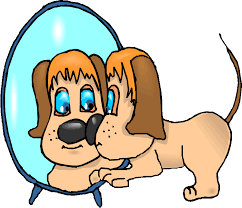 ​Dogs don't use mirrors to refer back to themselves like we do. No dog will ever gaze into a mirror and reflect, "So THAT'S what my ears look like." But that shouldn't suggest mirrors are meaningless to dogs. Instead, their relationship with mirrors seems to come in three equally interesting flavors.

​IN THE BEGINNING… You've probably seen a dog encounter a mirror for the first time. If that dog lives in your home, maybe you were camera ready, prepared to capture The Incident, post its hilariousness to YouTube, and sit back and watch the views pour in.


Upon first encountering a mirror, dogs—like other animals—may react as if the image is another member of their species, in this case, another dog. Young dogs often treat the image in the mirror not as themselves, but as if another dog play bowed, pawed, barked, or started to zoom around the room. In some cases, dogs display less jovial postures toward the dog-image staring back, such as body stiffness, unwavering staring, or raised hackles. But pretty quickly, something changes.

YOU MEAN NOTHING TO ME… Dogs come to find that neither play overtures nor stiffness amounts to anything, and they stop attending to mirrors. Mirrors fall to the backdrop of life, not worthy of their time. When this happens, dogs are displaying one of the most useful—and ubiquitous—types of learning in the animal kingdom: habituation. Habituation occurs when an individual learns not to respond to a previously arousing stimulus, in this case, the mirror.

Habituation is a good thing. "To respond to every novel or alarming stimulus, regardless of its significance, may waste energy and thus be maladaptive," explains The Encyclopedia of Applied Animal Behaviour and Welfare. Dogs probably couldn't live alongside us as our partners in crime if they didn't habituate to the many things they encounter day-in and day-out. Habituation highlights dogs' learning and memory skills: "No need to respond to X, Y or Z. Been there, done that.

Rate of habituation varies between individuals. It can be affected by the value or quality of the stimulus and how long or how often it is presented. Since mirrors and reflective surfaces are common and typically permanent fixtures, habituation can happen rather quickly. A return of the dog's old response, or spontaneous recovery, is possible if a dog hasn't seen a mirror in a while or a dog encounters a mirror in a new place.

Rate of habituation varies between individuals. It can be affected by the value or quality of the stimulus and how long or how often it is presented. Since mirrors and reflective surfaces are common and typically permanent fixtures, habituation can happen rather quickly. A return of the dog's old response, or spontaneous recovery, is possible if a dog hasn't seen a mirror in a while or a dog encounters a mirror in a new place.
The result: the tool, I mean, human, retrieves the ball from under the couch. Good human. Gaze alternation is common; have you seen it in your dog? As I've mentioned before, it was a dog’s gaze alternation in the movieWorld War Z that caused considerable turmoil.

But we are not dogs' only tool. A few years back, Tiffani Howell and Pauleen Bennett of the Anthrozoology Research Group—now at La Trobe University in Victoria, Australia—conducted two studies exploring whether pet dogs use the reflective properties of mirrors to solve problems. The first problem: can you find your owner? In this clever study setup, one owner directed their dog's attention to a mirror. A second owner stood in an adjoining room holding the dog's favorite toy. But the second owner was visible only if the dog looked in the mirror. What's a dog to do?

Of the forty dog participants, only seven turned to look at the second owner upon seeing him or her in the mirror. The results suggest that some dogs understand the nature of reflection, which fits with owner claims that they play “mirror games” at home with their dogs. Do any of you, out there in Scientific American reader-land, play games like this with your dog?

For their second mirror study, Howell and colleagues asked whether dogs could locate hidden food visible only via a strategically placed mirror. Study participants were again pet dogs, but this time dogs were placed in one of two groups: an experimental group which had access to a mirror that reflected the location of the food, or a control group without mirror access. Seventy-seven percent of dogs (17 dogs) with access to the mirror found the food (go dogs!). But despite attempts to control for odor cues, forty-one percent of dogs (9 dogs) in the control group—without a mirror—also found the food. These dogs in the control group "appeared to sniff the floor until they were able to locate the treat."

The moral of the story: mirrors are not meaningless for dogs, but mirrors are not exactly their number one tool either. A first-place tie, depending on context, should probably go to us and their noses.