www.thelastchancesanctuary.com​
What Counts As Animal Cruelty?

When people think of animal cruelty, they often think of violence inflicted on an animal. However, a common form of animal abuse is neglect.
Then there are the people that know about the abuse but do nothing to stop it. They are also guilty of cruelty to animals because they allowed the abuse to continue without reporting it or saving the animal from it. (www.aidforanimals.com) 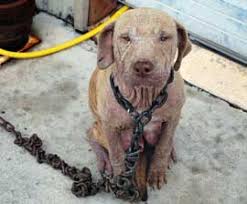 Animal lovers your age often ask us, "Why do people abuse or hurt animals?" That's a hard question to answer, but there are three main reasons why people abuse animals.

​ Most people who abuse animals don't do it on purpose. They hurt animals because they don't think about or realize what they are doing.

Many of these people don't know that what they are doing is cruel. For example, some people don't realize what kinds of shelter different animals need. They may keep a dog in their yard with a doghouse that is on the ground and gets flooded with water when it rains, or they keep their dog on a short chain all of the time.

Some people will try to keep their pet under control by using cruel types of discipline. They may think that punishment and intimidation are the best ways to solve problems.

Other people are cruel because they don't pay attention. For example, someone might forget to give their cat water for a few days or leave their dog in a car on a hot day with the windows rolled up. Often these people know better, but they either forget or don't care enough to pay attention.

Finally, some people hurt animals even though they think they're helping them. For example, some people have so many pets that they can't care for them all. These people are called hoarders, and they take in so many animals because they love them. Unfortunately, they can't care for all the animals they take in, and the animals end up living in a place that's cramped , dirty and unhealthy. Nearly all of these people can learn to understand that they are being cruel through education and increasing their awareness of the needs of our animal neighbors. Since most of the people who abuse animals make up this group, this means that most of the people who abuse animals can be helped with basic education.

The next biggest group of animal abusers do it on purpose, but don't keep doing it for a long period of time. For example, a group of kids may decide to throw rocks at a nest of baby birds they happened to see, or they may hurt a stray cat in their neighborhood.

The ones who are giving in to peer pressure might be trying to show off to their friends. Or they may be with a group of friends who are all trying to impress each other, and so they go along with what everyone else is doing.

​ Intentionally hurting animals for any reason is serious. In most states, those caught doing this will face harsher punishment than those who hurt animals unintentionally. However, these people usually don't hurt animals more than a few times. They learn to think about how others feel, and they learn to stand up for themselves. This group can be helped through education and support, too. 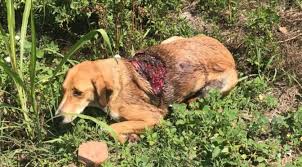 Why do these people hurt animals? There are different reasons. A lot of these people want to have control over others. They will hurt an animal because they think this means they control the animal. Or they may hurt the animal to control another person. For example, a husband might hurt the family's pet to show his wife what he could do to her if she doesn't obey his commands. Someone else might make his dog kill other dogs because he thinks that makes him powerful

Others simply enjoy pain and violence. Those who enjoy violence might also destroy inanimate objects as well as animals and people.

All of the people in this last group suffer from serious, psychological problems that will probably not go away on their own. They often need the help of licensed professionals—like a psychologist. We are not 100% sure why people become like this—most are probably born with their problems, but others can get their problems from brain damage, poisonous environments, or by being treated badly themselves. Without help, the psychological problems these people have can haunt them for their whole lives.

If you know anyone who you think may be like this, don't approach them yourself. Talk to a trusted adult, and let the adult find someone to help these people.

What You Can Do to Help Stop Animal Cruelty

Have you ever seen someone hurting an animal and felt like you couldn't do anything to stop it? Well, read on—there are important ways that you can speak up.

Get Help! If you see someone hurting an animal, or know of an animal who looks sick, injured or does not have adequate food, water or shelter, you can do something about it. Never try to help the animal yourself. Instead, tell an adult you trust. Together, you and an adult can call the police or your local animal shelter. It's very important to inform the police because animal cruelty is against the law in all 50 states.

e prepared to provide information on the cruel act that you witnessed. Write down what you saw happen, who was involved, the date of the incident and where it took place.

Don't let your animal friends roam free. Keep your cats indoors. Dogs should always be on leash and supervised when they're outside.

Be kind to animals and others will follow. Let your family, friends, classmates and adults know that hurting animals is not cool.

You're never too young to volunteer your time helping animals. Contact your local animal shelter or humane society for junior volunteer programs.

Share facts and information about the prevention of animal cruelty and responsible pet care with your friends, family, teachers, neighbors and classmates.

Invite a Guest Speaker to Your School.

​Ask your teacher to have someone from your local animal shelter or humane society come and speak to the students in your school. These awesome animal lovers teach kids all kinds of things such as pet care, dog bite prevention, how to pet a dog and how to stop cruelty.

With the help of one of your teachers, organize an animal lovers' club at your school.

In order to stop animal abuse, we need to understand WHY people are cruel to animals.