Ten Dog Breeds That are the Worst Swimmers

www.iheartdogs.com
(a really great website with large selection of articles, worth a visit!) 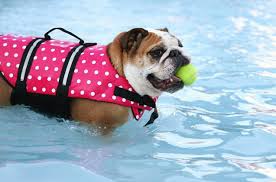 For some reason, we all have this idea that dogs should be natural swimmers and love the water. However, this is not true. Not only are dogs not natural swimmers, but some breeds are not physically built for water. Follow water safety for all dogs including keeping them in shallow water at first; wearing a life vest; and watching for signs of distress.

The English bulldog may glide on a skateboard, but they sink like a rock in water. Their deep chest, dense body, round barrel and short legs are just not meant for swimming. In addition, since they are a short-nosed breed, they have a hard time breathing when exerting themselves and if they get water up that nose, they can get into trouble pretty quick.

Built like a tiny bulldog, the put has all the same body traits as the bulldog, which means he is not built for swimming either. Keep him in shallow water or on a floaty for safety.
French BulldogAnother bully breed, the frenchy is also not a “water dog” by nature. However, they are active and love splashing around in the shallows, but don’t expect him to swim for far distances.

3. French BulldogAnother bully breed, the frenchy is also not a “water dog” by nature. However, they are active and love splashing around in the shallows, but don’t expect him to swim for far distances.

The corgi has a dense body, large barrel, and short legs, making him not a strong swimmer either. He would be happier sitting in the boat with this life vest on for safety.

Although lightweight, the doxie’s long body and short legs make doggy paddling awkward and hard work. Because they are so short, they can drown in a shallow water, so keep an extra close eye on him near any body of water.

Another bully breed, he has the same trouble of a dense body, shorter legs, and a deep chest that makes swimming laborious.

Not only does the Basset have ridiculously short legs given his body mass and size, they tend to tire easily, making swimming dangerous. In addition, those long droopy ears are the perfect home for bacteria from the water to grow and cause major ear infections, so your basset may be happiest in shallow water.

While at first glance you may wonder why the Chow is on this list, but if you remove the fur, you will see that he too has a deeper chest and shorter legs than the typical retriever or water spaniel. The Chow also has the short-nose that causes breathing difficulty and can quickly fill with water.

This little dog has a flat face and short legs, making him a weak swimmer. In addition, they are not a super strong or athletic dog, so they will tire quickly if forced to swim long distances. Put him in a floating and a life vest, however, and he will be quite content to soak up the good life.

This little dog has a flat face and small legs compared to its round, deep chest, making it hard for him to swim. Also, if they are in “full coat” it gets really heavy in water, can get caught on this, dragging them down, and can cover their face, making breathing harder. You can still take them to the beach, just let them build sand castles instead of surf.