Tug toys can be a wonderful source of fun and help to build your relationship with your dog, if used correctly. Have a look at the great, top quality pull toys and also soft toys that can be used for pulling. We also have a wonderful choice of other top quality toys such as chew toys for professional chewers, food puzzle toys for mental stimulation, as well as a array of toys that can be stuffed, thrown and so much more. We don't start there, we also have just about everything you need for your dog, cat or small critters. Available on-line, or from our suppliers. www.mcmac.co.za
TUG TOYS - CAN THESE ENCOURAGE AGGRESSION?

​www.preventivevet.com - a really great website with tons of interesting articles, on both dogs and cats - enjoy! 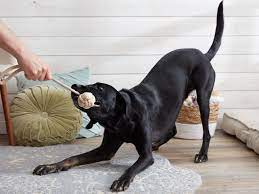 You might have heard that playing tug of war with your dog, especially a puppy, puts them on the path toward aggression. If you’ve heard this, you’ve heard wrong.

Tug of war, played the right way and under the right circumstances, will not encourage aggression in your dog. Instead, it will actually give you a tool to establish a healthy relationship with your dog.

There’s even some science behind it. A 2003 study published in the Journal of Applied Animal Welfare Science examined 50 people and their dogs playing tug of war and other roughhousing-type games. According to the researchers, the game itself had no significant impact on aggression in the dogs. In fact, they reported that dogs that played tug of war and fetch had more confident interactions with their people. However, aggression was found to be a potential issue depending on who started the game. If the dog started the game, they tended to be more aggressive and less responsive to their people. When people started the game and set the rules, it helped promote positive behaviors in the dog.

However, and this is important, you should NOT play tug of war with a dog that is already aggressive, a resource guarder (aggressively protects their food, toys, etc.), or is showing early signs of either. Tug of war won’t make your dog aggressive, but it might intensify unwanted behaviors or patterns that are already present.
Before you play tug of war, you need to set a few ground rules.

3 Rules of Tug of War

Rule 1: You Say When to Play

Don’t engage your dog if they bring their favorite tug-of-war toy and drop it in your lap or at your feet. If you pick up the toy and start playing, you’ve just let your dog know that they control this relationship. The more this happens, the more your dog will learn that aggressive/dominant behaviors get them what they want.

Keep the toy stored somewhere your dog can’t get at it. This way, you can bring out the toy when you’re ready to play, further establishing that tug of war is a reward, and your dog has to behave to get that reward. But if you bring out the toy and your dog grabs for it before you initiate the game, put it away and wait for them to calm down before bringing it back out.

If your dog’s mouth touches any part of you — hand, arm, leg, even your clothing — the game is temporarily over. When this happens (it will be an accident at first, but can become dangerous if you don’t stop the unwanted behavior early and often), use a marker word like “drop it” or calmly tell them “no” and stop the game immediately. Let them calm down before resuming the game. If their mouth touches you more than two or three times in a row, the game is over for the day.

Teach your dog how to “drop it” as soon as possible. During your first few tug-war-games, tell them to “drop it” and wait for your dog to let go of the toy. If they refuse (most dogs will be super reluctant to stop the game), keep your hand on the toy but let your arm go limp. Pretend that the game is over and wait for them to release the toy. Only resume the game once they let go and wait for you to say it’s OK to play again. If they’re being particularly stubborn, you can always walk away, or take the toy away completely for the day.

Picking the Best Tug-of-War Toy for Your Dog

For tug of war, you can’t do much better than a good, old-fashioned rope toy. Ropes are soft enough that your dog can get a good hold without cracking their teeth, but durable enough to withstand several games of tug of war. However, do not leave ropes with your dog unattended, and stop using a rope toy if your dog begins to pull of threads during your tug-of-war games. Plenty of dogs have undergone surgery to remove strands of rope from their stomach or intestines. Linear foreign body digestive obstructions from strings that make up rope toys can saw through a dog’s intestines with severe, painful, and expensive consequences. Ropes can also harbor dirt and bacteria, and since they’re are hard to clean, it’s usually easier to just replace them when they get too dirty. (Tip, for some dogs, you can have an awesome game of tug of war using nothing more than an old sock with a couple of knots tied at the ends.)

Other items such as rubber “handle” toys are also soft enough to protect your dog’s teeth but durable enough to withstand some good tugs. However, these toys can be hard for some dogs to hold firmly in their teeth. And make sure your dog isn’t able to rip off pieces of the toy and swallow them, as it can easily cause a digestive obstruction. For non-rope toys, I highly recommend the Westpaw Bumi .

For smaller or less-intense tug-of-war dogs, a stuffed toy, like this soft Tuffy tug toy, can be great for a game, as long as your dog doesn’t tear apart the toy and try to eat the stuffing inside.

Make sure that any toy you give your dog is soft enough that it will “give” a bit if you press it with your thumbnail, but durable enough that your dog won’t rip off and swallow pieces of it. Learn more about how to pick the best option for your dog by reading “3 Simple Steps to Choose the Best Chews for Your Dog.”