Can Too Many Ball Games Increase Stress & Worsen Behaviour?

www.burgesspetcare.com - very nice website with lots of articles on their Blog section - enjoy! 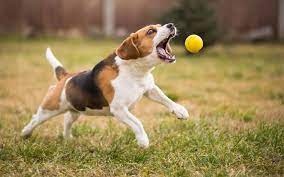 Most dogs love chasing and fetching a ball, but could too much of this classic canine game have negative consequences? Some experts believe that repetitive high-energy exercise boosts a dog’s adrenaline levels to the point where powerful chemicals, such as cortisol, are released.

Cortisol has many functions including working with certain parts of the brain to control mood, motivation, and fear. It’s best known as the stress hormone, helping fuel the ‘fight or flight’ instinct in a crisis. While very useful in times of danger, prolonged exposure to cortisol can lead to a number of health problems.

According to canine behaviourist Sindhoor Pangal , there are cases where adrenaline in dogs is known to have remained in circulation for seven days and cortisol for up to as much as 40 days. Pangal explains it like this: “When an animal hunts in the wild, after that adrenaline rush, he sits down to eat his meal and lets the hormones wear off. But when we throw the ball, we throw several times each session. Imagine bungee jumping several times over. Imagine taking that many shots of steroids, every day.”

Professional dog trainer Sara Reusche runs Paws Abilities Dog Training in Rochester, Minnesota, USA and spends much of her time working with reactive and anxious dogs. She believes highly aroused dogs (arousal refers to a dog’s level of excitement and emotional control) are extremely stressed dogs. She says: “A highly aroused dog will be very excited, with a fast heartrate and respiration and poor impulse control. He may have dilated pupils or chatter his teeth. He may pant, jump around or on you, or vocalize incessantly. He may become grabby or mouthy. Alternatively, he may become ‘locked on’ to an activity, freezing in place and staring intently at the object of his obsession, spinning in circles, or pacing.”

​Save for special times

Reusche recommends cutting down on overly arousing activities, saving them for special times. She adds: “If you engage in activities that cause your dog to become aroused, and therefore stressed, every day, your dog will always have high levels of stress hormones in his bloodstream. High arousal becomes the new norm. I’m often called in to work with dogs who have trouble controlling themselves or calming down. These dogs are often reactive and hypervigilant. Exercise that amps your dog up is okay in moderation but allowing your dog to engage in it every day will likely do more harm than good. This is highly individual but is most commonly seen with ball or Frisbee-obsessed dogs playing fetch every day.”

Alternating fetch games with nose games, such as treat searching, and mental games, such as dog puzzles, can be both rewarding and calming for dogs. Pet charity Blue Cross has some great ideas on different ways to play with your dog:

Tug of war - Toys to use include raggers and rubber rings. Encourage your dog to grab the toy by excitedly saying “take it”, and at the same time move the toy towards your dog. When your dog has a good hold of the toy keep the interest by shaking the toy side to side, up and down and backwards and forwards.

Hide and seek -  This can be played with people, toys or food and will make use of your dog's amazing sense of smell. Your dog will use a combination of wind scenting (sniffing the air to locate you) and tracking (sniffing along the ground to follow where you have walked). You might need someone to hold your dog while you crouch down in long grass or hide behind a tree. Remember to give a food treat and be very excited when they find you!

Search -  Pet dogs don’t have to hunt for their food, but you can use their skills to find their favourite toy. Start by briefly teasing your dog with the toy and then, while your dog is watching, throw it into long grass. Then encourage your dog to go and find it by saying in an excited voice “where is it?”. When your dog understands the game, you can make it harder by not letting your dog watch where you hide the toy. If your dog isn’t interested in toys you can play the same game but hide portions of your dog’s dinner or tasty food treats.