By Linda Piegl and reviewed by Dr Anuska Viljoen 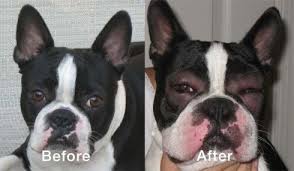 ​The most common insect stings are inflicted by bees, wasps and hornets. Dogs are particularly prone to getting stung due to their curious natures and habit of sniffing out their world. They are often stung on the nose or paws and the stings are painful, causing localised irritation and swelling. The severity is determined by the type of insect and also the health of your dog. The danger is that some dogs, like humans, can be allergic to the venom and this, as well as multiple stings, can cause anaphylactic shock and turn fatal (e.g. if a dog is attacked by a swarm).

If your dog is allergic, the symptoms are immediate – difficulty breathing, pale gums, confusion, convulsions, weakness, sometimes vomiting. Wrap your dog in a blanket and get him to the vet at once.

If your dog stops breathing, he will go into cardiac arrest and his heart will stop beating. Check that his airways are clear and that his tongue hasn’t rolled back into his throat. With a cupped hand remove any phlegm or obstruction from his mouth.
Listen to his chest on the left side of his body, underneath the elbow, to determine if he has a heartbeat. If not and he’s not breathing, his lips, tongue and gums will be turning blue due to the lack of oxygen and you will need to perform CPR (cardiopulmonary resuscitation) on him. CPR is a combination of artificial respiration (also called the rescue breath) and chest compressions. Here is how you do it:
NB: Performing CPR unnecessarily is dangerous. The best way to determine whether your dog needs CPR is to check if the lips, gums and tongue are blue before proceeding. 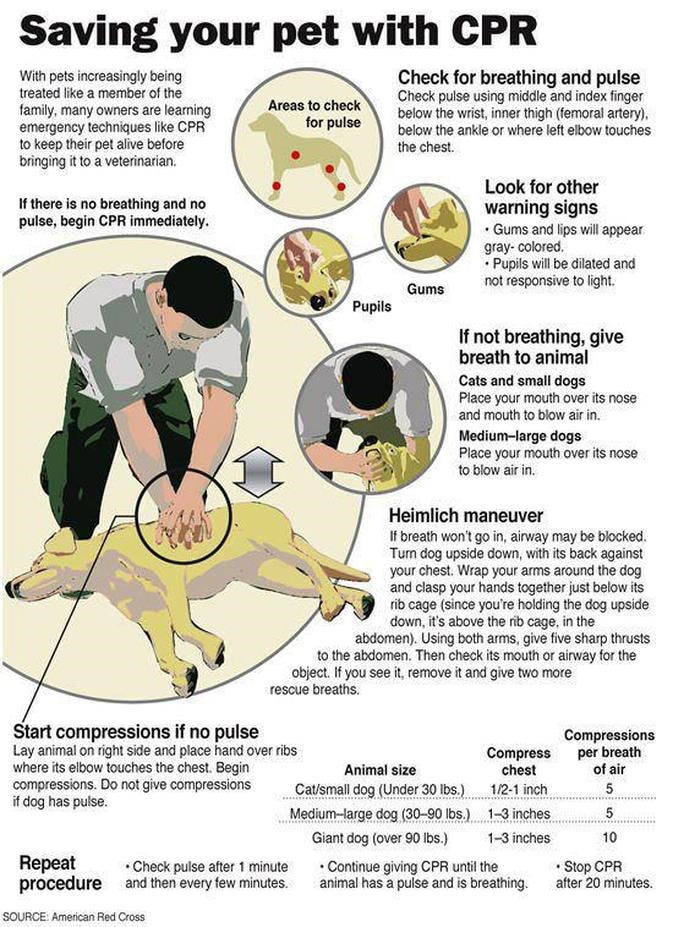 When a bee stings your dog, it only stings once, and the barb at the end lodges into his skin. The sting detaches from the bee, and the venom sac continues to pump venom for several minutes afterwards. It’s therefore important to remove the sting as soon as possible to minimise the amount of venom going into your dog’s bloodstream.

Remove the sting with a sideways scraping motion using a bank card or a blunt knife. Removing it with fingers or tweezers can inject more venom into your dog. Wasps and hornets (which are a type of wasp, just larger) can sting multiple times injecting venom each time. Their stings are particularly painful.

As dogs naturally try to catch flying insects, they can easily swallow a bee. This is as dangerous as an allergic reaction because a sting inside the mouth, on the tongue or back of the throat, will cause swelling and close off a dog’s airway. In such a case, you need to rush the dog to the vet and may even have to perform CPR.

There are several home remedies that can help your dog by reducing the pain and swelling:

Apply an ice pack – quick and easy to do, wrap the ice pack in a dishcloth and apply for no longer than five minutes and then leave off for five minutes. Do this until you can see a reduction in the swelling.

Apple cider vinegar – put on an earbud or on cotton wool and apply a few times until the swelling is reduced.

Aloe juice – if you have an aloe in your garden, break off a fleshy leaf and apply the sap.
Homeopathic Intervention

Homeopathic remedies, if administered immediately or as soon as possible, can save your dog’s life. A documented case in 2018, at Simply Vets integrative veterinary clinic in the Cape, was a 10-year-old dachshund, Lucy. She and her pack mates were descended on by a swarm of bees and her brother, who took the brunt of the attack, died at the scene.

Lucy arrived at the clinic with more than 300 stings in her tiny body, suffering from shock and with a weak heartbeat. She was immediately put on a drip with homeopathic apis (bee venom) and aconite for shock and fluids.

​For such a small, senior dog, even 100 bee stings could have proved fatal but she miraculously recovered with only the power of homeopathy. (To see images of Miracle Lucy click here:

A homeopathic remedy to have on hand in the event of your dog getting stung is the Simply Natural Sting Remedy. Formulated by South African vet and homeopath, Dr Anuska Viljoen, who is also the chairperson of the Complementary Veterinary Medicine Group, this comprehensive remedy can be used to treat all kinds of insect bites and stings, including scorpion stings.

The Sting Remedy combines homeopathic bee venom (apis) with other remedies such as urtica (stinging nettle) to help all symptoms that cause a similar itchy, burning sensation with swelling. This remedy can also be used for severe, acute, allergic skin reactions with raised welts and swelling, even if the cause is unknown (skin reactions often occur after bee stings and may last for a few days). It’s also helpful to manage the pain after being badly sunburnt or with any kind of burn where there is redness, swelling, itching and the fear of being touched as the pain is so bad. Dogs often show pain by wanting to bite if you touch the area of the burn, sting or rash.

Administer immediately after your dog has been stung and every 5-15 minutes afterwards to relieve pain, burning, itching and swelling. The dosage is 10-20 granules by mouth on an empty stomach. Also dose according to severity, in other words, every 5 to 15 minutes in severe cases until the swelling begins to subside or the pain begins to reduce, then decrease (hourly to 3 times daily) as required to keep the symptoms from flaring up again.

While controlling your dog’s inquisitive nature is not possible, you can try to avoid any potential problems by checking your garden regularly for hives. Remember that bees also build hives underground and behind rocks and in crevices. Should you find a hive, check on the Bee Removal Association of South Africa’s website www.brasa.co.za  for ethical and humane bee-removal experts.

Going to the dog park? Before letting Fido out to play, do a quick scan for hives. If he’s on lead, it will be much easier to prevent him from putting his nose in tree trunks, holes in river banks and pipes, and also to keep him away from flower beds and rubbish bins where bees tend to congregate.

​Take Sting Remedy on walks, to the park or when hiking. Remember, as it is homeopathic, it can be used equally effectively on both people (at the same dose and rate) and animals. What's good for your dog can sometimes be good for you too…