Flat-Faced dogs pose a health problem - why then are they still so popular? 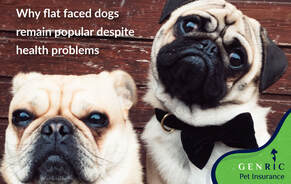 Flat-faced dogs are what is known as Brachycephalic, which means 'shortened head'. They have a short, often squashed face and this is due to a smaller upper jaw, in which the tissues inside are bigger than the jaw can cope with.

It does give them an adorable look and contributes to their popularity, plus, they tend to be sedentary in nature due to their appearance, and therefore are gaining popularity with more and more people downsizing and living in flats and townhouses.

Brachycephalic dogs are very prone to snoring, snorting, loud breathing - tire very easily and can even faint. These conditions not sound very serious, however it does mean that the dog's airway is partially obstructed which can become worse if left untreated, and can lead to a number of health problems, including respiratory diseases (called 'brachycephalic airway syndrome and some conditions may require surgery), eye problems and also spinal concerns.

What is unfortunate, is that due to the short snout and the problems that accompany this, they tend to have a shorter lifetime of at least 4 - 5 years, plus, their care can become very expensive.

Which common breeds are know as Brachycephalic?

The most popular breeds that fall under the Brachycephalic label are the Bulldogs, French Bull dog, Pugs, Boxers, Shih Tzus, Chihuahua's, Chow Chow, Boston Terrier, Peke, Lhasa Apso, English Toy Spaniel and Bull Mastiffs, and Boston Terriers. These breeds are very popular and those that have had one of the Brachycephalic breeds, tend to choose them again.

Not everybody is happy about the increase in their popularity

However, not everybody is happy about the increased breeding, and according to a recently published article in Plos One (link to full article), "some veterinarians consider Bulldogs, Pugs and French Bulldogs as having “health and welfare too compromised to continue breeding” . Their disease burden is likely to negatively impact animal welfare of brachycephalic dogs , and also has the potential to impact human wellbeing, given that owners of pets with chronic illnesses report greater psychological distress and a lower quality of life than owners of healthy pets ".

In order to understand the decision making around the choice of dog breed and to avoid future proliferation, or perpetuation of breeds, a study was done by Rowena Packer, who is an animals behaviour lecturer at the Royal Veterinary Collage. The aim of the study was so that professionals can use the result of the research 'to dissuade some prospective owners from purchasing a brachycephalic dog, by opening their eyes to the many problems associated with owning brachycephalic dogs'. In their article, they site the following as the main reasons not to increase the breeding of these dogs. 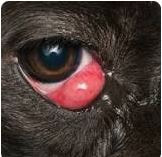 Prone to problems with their eyes and eyelids as the eyes tend to bulge slightly. this can lead to the dog not being able to fully close the eyes (even when sleeping), and the most commonly known condition is Cherry Eye. Cherry eye results from the prolapse of the 3rd eyelid gland which appears as a red swollen mass on the lower eyelid near the nose or muzzle, and due to its similarity to a cherry. It can be small and only appear on occasion, or can cover a significant portion of the cornea. Any signs of Cherry Eye must go to a vet immediately.


What did the research say about why people choose this breed?

A short summary as to why is below:-


Should you be considering one of these breeds, do fully research all the health aspects, discuss same with a vet and maintain a good and regular relationship with them. Do find out potential costs, ensure you have Pet Medical Insurance, and ensure that you obtain your pup from a top quality breeder.