​Please visit and LIKE our Facebook Page and share with family, friends and on your own Facebook page, and ask them to share further – it is only by working together and sharing knowledge and education that we can improve the lives of dogs and assist owners. We do not inundate you with posts – an average of 5 per week, and the odd Did You Know. Thank You!
The Key to Kibble

Courtesy of www.dogstardaily.com -  Dr. Ian Dunbar. One of the very best websites - full of  valuable information, downloads and so much more - do give this a visit when you have time. 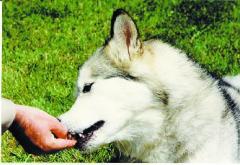 Pic - www.dogstardaily.com
Folks that have read my books and seen my videos know my sentiments about dog training: If you can’t train your dog while enjoying a cup of tea, reading a book, or watching television, then you’re doing something wrong.

I would regularly train my Malamute Phoenix while watching football (soccer) matches on the television. During the advertisement breaks, I would ask her to leave the couch and sit in her dog bed directly in front of the television. When she sat in her bed, I could barely see the bottom of the screen over the massive dome of her head. It was easy then to lie back on the couch, to take a sip of tea and to read a few pages while keeping just one eye on her solid sit stays. If at anytime, I could see the entire screen, I knew that she was sinking and that it was time to remind her of her Sit Stay.

I settled down on the couch with a cup of tea and a bowl of kibble (Phoenie’s brunch). Phoenie was going to enjoy individual kibble hors d’oeuvres, learning key Search and Rescue. I tossed my keys on the carpet in the middle of the room and kept an eye on Phoenix, who, for the next five minutes, kept both eyes on me — an imploring, penetrating gaze with thoughttransfer...“ give-me-kibble, give-me-kibble…” (The default setting for most dogs to get what they want is “to sit and look cute .”)

After a while Phoenie gave up and glanced over her shoulder. Immediately, I said, “Gooood girl” and gave her a piece of kibble. She then watched me for a minute or two before looking towards the window...“Good girl” and another piece of kibble. She immediately got up and came closer, so I ignored her. After a short while she got up again and moved away — “Good girl” plus kibble. She has played this game before and quickly caught on to the fact that the key to the kibble did not involve looking at me. This time she got up and put her nose to the carpet—“Goooood girl” plus three pieces of kibble! After similarly rewarding her half a dozen times for sniffing the floor, she was nose vacuuming like a bloodhound on a spoor. I praised and rewarded when she sniffed towards the keys and sure enough, eventually she sniffed the keys—“Goooooooood girl” plus five pieces of kibble.

Phoenix received the next half a dozen or so pieces of kibble for variously sniffing and noseprodding the bunch of keys. Then we thinned out the rewards, looking for some closer caninekey communion. With the paucity of kibble, she became much more demonstrative in her key interactions and after one particularly lengthy reward-delay she eventually, grabbed the keys and tossed them to one side. She received an extremely enthusiastic reward for that response. She had learned that the secret to the game had something to do with the bunch of keys and she was gladly grabbing the keys and tossing them all over the place and getting rewarded handsomely for her efforts.

At this stage of the game, precise timing becomes the sine qua non of successful training. I would start to say “Gooooood girl” the moment she touched the keys, but would abruptly stop praising and drop the kibble back in the bowl the instant she dropped them. After five non-kibble key-tosses in a row, Phoenix stopped tossing the keys but also, she stopped touching them altogether. So, we had to backtrack a bit and I had to wait a couple of minutes to reward her for touching the keys again. And bingo! On the very next attempt, Phoenix picked up the keys and held them in her jaws just a few inches from the floor. “Good girl” plus three pieces of kibble.

From then on it became plain sailing. Phoenix had learned that the keys were the key to canine kibble and would happily pick them up whenever I would throw them down. Now, it was time to add some instructions. I sat on the carpet, said, “Find my keys”, put the keys on the floor and said “Good girl” as she held them and held out my hand to catch the keys as she dropped them. We did this a dozen times for a single piece of kibble each time but with the additional contingency — no kibble if I dropped the keys. In no time at all, she learned to delicately place the keys into my proffered hand.

Then came the fun bit. With Phoenie in a sit stay (in front of the TV), I would place the keys on the floor and then return to sit on the couch. Sure enough, when instructed to “Find my keys” Phoenix would pick them up and come back to drop them in my hand. Over successive trials, I would place the keys further and further away until eventually I was placing them in different rooms. By this time we were getting low on kibble and so I was only rewarding some of her quicker and more enthusiastic finds.

The entire training session comprised just one canine brunch. It involved very little effort on my part and Phoenix loved the game so much that we used to play it quite often, especially after asking her if she would like to drive downtown to buy a dish of frozen yogurt. (Frozen food is obviously a malamute thing.) On one occasion, I hid the keys in a really difficult place (on top of the dining room table — strangely enough, the place I always put my keys) and after hunting high and low for a long time, Phoenix came back to where I was sitting and started rummaging around in the couch and then...she offered me the remote control instead! Seems that it had been under the cushion all that time. What dogs will go through to keep the television tuned to Animal Planet.