The dangerous dog debate Breed bans are popular, but do they make the public safer?
https://www.avma.org
By R. Scott Nolen
Police and animal control reports identify the dog that attacked Lynn as a sexually intact, adult male pit bull named Bull. Records show that in April 2006, Bull escaped his owner's yard and chased a man walking with his dog. The man and dog fled to a nearby porch, where the resident reportedly informed the man that Bull had recently cornered her in her own backyard. Bull's owner was cited for not having a dog license and received a verbal warning for the leash law violation.
​
To avoid criminal charges for the attack on Lynn, Bull's owner consented to having the dog euthanized.
​
Lynn is not the same person she was before the attack. She grew up loving dogs. She still loves dogs, but says the attack felt like a betrayal.

I had no negative experiences with pit bulls or any dog prior to the attack. That a dog was capable of this just wasn't part of my world," Lynn said. Four months later, she launched DogsBite.org. Originally intended as a website to educate the public about dangerous dog breeds, DogsBite.org has evolved into a national organization that also advocates for dog-bite victims and for preventing serious attacks. The organization's website includes victim testimonies, a tally of U.S. dog-bite fatalities, and an overview of breed-specific legislation throughout the country.

Breed-specific laws ban or restrict ownership of dog breeds believed to be responsible for the most serious attacks on people. Pit bull–type dogs are the poster child of breed laws, but they can also apply to Rottweilers, Doberman Pinschers, and other large breeds. The American Kennel Club explained in a statement to JAVMA News that "pit bull" is a term commonly used to describe a particular type of dog—many being of mixed breeding—that has some ancestry relating to breeds in the United States, such as Staffordshire Bull Terriers and American Staffordshire Terriers. The AKC said "pit bull" is also used sometimes to describe mixes or breeds not registered with the AKC with names such as American Pit Bull Terrier or American Bully. "AKC does not consider Pit Bulls to be purebred dogs, and we register no such dogs," the organization said.

Nearly 90 million dogs are owned as pets in this country, according to the American Pet Products Association. Those relationships are usually peaceful, but not always. More than 4.5 million people are bitten by dogs annually in the United States, according to the Centers for Disease Control and Prevention. The agency attributed over 300 deaths to dog attacks between 1979 and 1996, most of them children's. An analysis by the Agency for Healthcare Research and Quality found roughly 316,000 emergency room visits and 9,500 hospitalizations in 2008 were dog bite–related. DogsBite.org reports 31 dog bite–related human fatalities occurred in 2016 and a total of 392 deaths from 2005 through 2016.
​
DogsBite.org's claim that pit bull–type dogs were responsible for 65 percent of the deaths during that 12-year period is disputed by some groups as inaccurate and misleading. The American Veterinary Society of Animal Behavior, for example, says identifying a dog's breed accurately is difficult, even for professionals, and visual recognition is known to not always be reliable.

"Pit bull" is a term commonly used to describe a particular type of dog—many being of mixed breeding—that has some ancestry relating to breeds in the United States. … "Pit bull" is also used sometimes to describe mixes or breeds not registered with the AKC. …
Statement from the American Kennel Club

That's partly why the CDC stopped collecting breed data in dog-attack fatalities after 1998. Julie Gilchrist, a pediatrician and epidemiologist with the CDC, explained the challenges of studying dog bites during a presentation at the 2001 AVMA Annual Convention. "There are enormous difficulties in collecting dog bite data," Dr. Gilchrist said. "No centralized reporting system for dog bites exists, and incidents are typically relayed to a number of entities, such as the police, veterinarians, animal control, and emergency rooms, making meaningful analysis nearly impossible. Moreover, a pet dog that bites an owner or family member might go unreported if the injury isn't serious."

​Breed restrictions emerged and proliferated during the 1980s as news reports increasingly portrayed pit bull–type dogs as an apex predator, one on which no other animals prey. Sports Illustrated highlighted a story on dogfighting in its July 27, 1987, issue with a cover featuring a snarling dog under the headline "Beware Of This Dog: The Pit Bull Terrier." Hollywood, Florida, enacted the nation's first breed-specific ordinance in 1980 after a pit bull–type dog scalped a 7-year-old boy and mangled his face. That law, which required owners of such dogs to prove they possessed $25,000 in personal liability insurance, was overturned two years later; the judge cited a lack of evidence that pit bull–type dogs were more dangerous than other dogs. 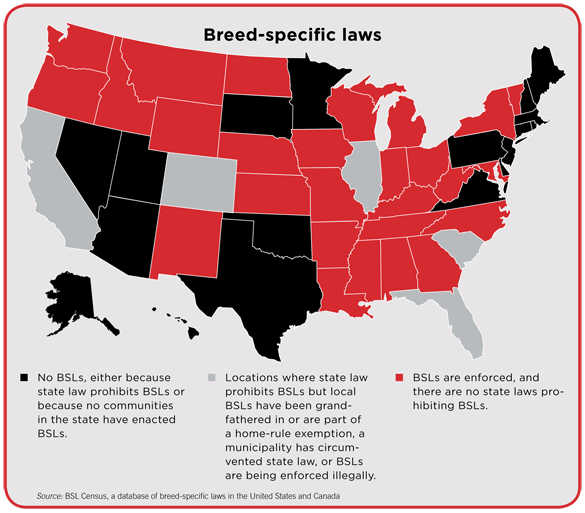 "The usual arguments are breed-specific laws are unconstitutionally vague, or they violate the owner's right to due process or equal protection," Wisch said. "The courts are pretty comfortable shutting down those arguments as long as the legislation is rationally related to the stated goal of protecting the public from dog attacks."

I'm opposed to breed-specific legislation. I want my team and my officers to be as objective as possible."
Robert C. Leinberger Jr., president, National Animal Care and Control Association

While the legal questions are mostly settled, debate over the effectiveness of such laws and regulations is not. Critics—who are many—say breed bans discriminate against responsible dog owners and malign select breeds as inherently vicious, a claim not supported by a 2014 AVMA report ("The Role of Breed in Dog Bite Risk and Prevention") that found pit bull–type dogs not to be excessively aggressive.
Opposition to breed bans has been expressed by the AVMA and CDC, along with the American Bar Association, Humane Society of the United States, and American Society for the Prevention of Cruelty to Animals. The Obama administration even took sides in the debate, describing breed-specific laws as "a bad idea" in August 2013 after an online petition calling for federal breed bans garnered more than 30,000 signatures. A handful of states, including Massachusetts, Nevada, and Connecticut, pre-emptively adopted laws prohibiting their towns and counties from regulating dogs according to breed.
and met presidents Harding and Coolidge. Sgt. Stubby was awarded several medals for his heroism, including a medal from the Humane Society of the United States presented by Gen. John Pershing, commanding general of the United States Armies. Stubby died in 1926. His skin was mounted on a plaster cast and is on display at the Smithsonian's National Museum of American History. (Courtesy of the Smithsonian's National Museum of American History)
Robert C. Leinberger Jr. has been dealing with dangerous dogs as an animal control officer for 26 years. In addition to being animal control supervisor for Richmond, Virginia, Leinberger is president of the National Animal Care and Control Association, which opposes breed-specific laws.
"Dangerous and/or vicious animals should be labeled as such as a result of their actions or behavior and not because of their breed," according to an NACA statement.
Leinberger says breed laws are too narrowly focused and don't account for such important factors as the owner's treatment of the dog and compliance with vaccination and licensing ordinances. Virginia law doesn't recognize breed as a determining criterion for whether a dog is a public threat. That is for a court to decide. A "dangerous" dog in Virginia, Leinberger explained, is one that attacked a companion animal, injuring or killing it, or bit a person without causing serious injury. A local court will mandate a dangerous dog be neutered and microchipped, and possibly wear a muzzle in public. The owner must buy personal liability insurance and post warning signs on the property. A dog that kills or seriously injures a person is declared to be "vicious" and ordered to be euthanized.
"Personally and professionally, I'm opposed to breed-specific legislation," Leinberger said. "I want my team and my officers to be as objective as possible during their investigations and not having to worry 'Is that a Doberman? Is that a Pekingese? Is that a pit bull or a Weimaraner?' I want them to look at the merits of the case: This dog, whatever it is, got loose, attacked a person or another animal, and caused injury. I want them to look at that, rather than having to prejudge the animal and taint the case."

Colleen Lynn says breed-specific ordinances aren't meant to prevent each of the 4.5 million dog bites that occur each year. Rather, they aim to prevent the smaller number of maulings and severe injuries, for which the victim is often a child. A 2016 study she cited of 1,161 pediatric dog-bite victims in Atlanta found pit bull–type dogs were 2.5 times as likely as other dogs to bite in multiple anatomic locations. Additionally, children bitten by pit bull–type dogs were three times as likely to need surgery as were those bitten by other dogs.

"The mission of DogsBite.org is to reduce serious dog attacks," Lynn said. "Breed-specific laws strengthen existing dangerous dog laws by targeting some of those prime offenders."
Both sides of the debate have evidence supporting their positions. After ownership of pit bull–type dogs was banned in Sioux City, Iowa, in 2008, public health records show the number of bites by them dropped from 24 in 2007 to four in 2015. Similarly, in Springfield, Missouri, where owners of pit bull–type dogs have been required since 2006 to license, neuter, and microchip their dogs and post warning signs on their property, the number of bites by such dogs fell from 34 cases in 2005 to 16 in 2016. Prior to the ordinance, the city euthanized "hundreds" of unwanted pit bull–type dogs each year. That number dropped to 26 in 2016.

However, in 2008 the Dutch government revoked a 15-year nationwide ban on ownership of pit bull–type dogs after a study concluded the law was ineffective. Researchers in a Canada-wide study published in 2013 found no difference between the number of dog bites in municipalities with and without breed-specific legislation.

Breed "absolutely" influences a dog's behavior and is one of several factors that shape an animal's temperament, explained Dr. Sagi Denenberg, a diplomate of the American College of Veterinary Behaviorists and the European College of Animal Welfare and Behavioral Medicine.

"No one bred a Golden Retriever to look golden. They bred dogs that can swim and spend a lot of time in the water without getting cold. We essentially bred dogs for thousands of years for their behavior," said Dr. Denenberg, an instructor and researcher at Bristol Veterinary College in the United Kingdom. Environment, the owner, and the quality of maternal care a dog receives as a puppy also greatly impact the dog's personality.
​
Dr. Denenberg believes people have forgotten that aggression is a normal canine behavior. A dog expresses aggression when it hunts or protects resources, as when a person too near a food bowl receives a warning growl. "These are normal behaviors. The problem is that aggression is unacceptable for us as owners," he said. "Every dog has its limit, and if they're pushed far enough, they bite. Some dogs have to be pushed really, really far before they show aggression, whereas other dogs show it much sooner, but each dog has the potential to be dangerous."
Find AVMA resources on dog bites, including statistics, research, and an alternative to breed-specific legislation at "A Community Approach to Dog-Bite Prevention". Additional information is available at www.DogsBite.org and www.AVSAB.org.​