Dog Aggression - Is this influenced by human behaviour?

www.innovativek9academy.com
From FOTD - If your dog is exhibiting any signs of aggression, please get a professional in to assist you - this is something that should not be attempted without professional assistance, as it can quickly increase, in both frequency and intensity. When considering a behaviourist to assist, please ensure that they practice ONLY Positive Reinforcement methods of training. Old fashioned methods and equipment, can not only severely damage the bond between dog and owner, they can also result in the aggression behaviour worsening. 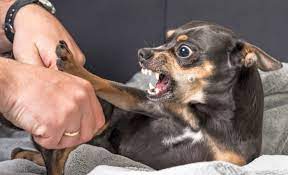 Dog aggression is frequently attributed to specific breeds, a myth that is perpetuated in the media and breed-specific legislation.

Unfortunately, once a dog displays aggressive behavior, it’s often the beginning of the end of the animal’s life.

Families (justifiably) fear having their children hurt. Shelters and animal control agencies fear placing a potentially dangerous dog in the home. So, unless a rescue group or well-qualified individual steps up, aggressive dogs are usually euthanized.

But the cause of canine aggression has less to do with breed than it does the type of environment and human behavior the animal has been exposed to. Recent research demonstrates that, rather than generalizing based on breed, we should consider dog aggression on a case-by-case basis.

“NO BAD DOGS, ONLY BAD OWNERS” – TRUE OR FALSE?

Broad generalizations and stereotypes are as useless for dog breeds as they are for people. No breed will ever be all good or all bad. But, because all breeds do have unique personality traits and innate characteristics, some breeds are more prone to behavioral issues if they are not properly socialized and trained.

Dogs that experience certain traumas during the critical fear imprint periods can also develop behavioral issues. And, for unknown reasons, the occasional canine will simply be a behavioral anomaly. Fortunately, these cases are very rare and it’s unlikely that this is the cause of your dog’s problems.

In most cases, dogs develop aggression because of they way they have (or have not) been handled, socialized and trained by humans.

HOW YOUR BEHAVIOR CAN AFFECT YOUR DOG’S AGGRESSION

This research tellingly demonstrated that those dogs who were put through puppy training classes had a significantly reduced risk of aggression both outside and inside the home.

As professional dog trainers, we know that our work is as much for the dog owners as it is for the dogs.

We can provide the very best dog training for your pet but, unless you do your part, it won’t bring you or your pet much benefit. That’s why our programs all involve the dog’s owner as well as the dog.

Some aspects of training are most effective without the owner’s presence, especially when dealing with aggression issues. If you have contributed to your pet’s behavioral problems, we must reestablish behavioral structure with the dog. Then we can work with you to improve upon and maintain the progress made between your pet and the trainer.
​
Canine aggression is never a subject to be taken lightly. Innovative K9 Academy encourages puppy classes and other types of early training, to minimize the chance that your pet develops behavioral problems. If you are already having problems with aggressive behavior, contact us immediately. Only experienced, professional dog trainers are equipped to safely address problems with dog aggression.