​Please visit and LIKE our Facebook Page and share with family, friends and on your own Facebook page, and ask them to share further – it is only by working together and sharing knowledge and education that we can improve the lives of dogs and assist owners. We do not inundate you with posts – an average of 5 per week, and the odd Did You Know. Thank You!
TAPPING DOGS ON THE NOSE, WHETHER TO GET ATTENTION, PUNISHMENT, OR AN INVATION TO PLAY, IS A 'NO, NO'

(we received this from a reader in a pdf format, but have been unable to find the actual link to website - if you know link, please do contact us, so we can credit accordingly. thanks)
​ 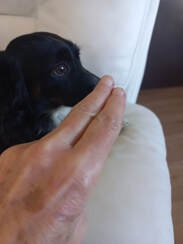 It's a Sensitive Area

​First of all, it should be considered that a dog's nose is a sensitive area. Sure, a canine's nose is quite powerful in detecting smells, but it's just made of cartilage and soft tissue and it has a blood supply of arteries and veins and nerves.

Of all a dog's body parts the nose is therefore an overall delicate area considering its internal nasal structures.
A traumatic nose injury in dogs can cause bleeding and pain that may require veterinary attention. Dogs should not be tapped, smacked or punched on the nose with the hands or other objects for any reason.

It Triggers Self -Defense

Even though a tap on the nose may not necessarily end up hurting the dog, we need to look at how the dog perceives it and what happens to him inside, yes, that means emotionally.
Repeated tapping to the dog's noise may trigger fear and self defense in the long run and the dog may at some point react defensively just as it can happen with scruff shakes and other intimidating actions.

Tapping a dog on the nose is based on positive punishment, meaning that its timely application is meant to reduce and stop an unwanted behavior. However, this type of correction actually heightens the chances for defensive aggression studies say.
A study conducted by Meghan Herron, DVM, DACVB, Frances Shofer, DVM and Ilana Reisner, DVM, DACVB, of the Matthew Ryan Veterinary Hospital of the University of Pennsylvania, found that when dog owners resorted to harsh confrontational techniques, dogs responded with aggression.

" Punishment is like carpet bombing. The behavior you wanted to target gets hit but so can a huge portion of the dog's whole repertoire."~ Jean Donaldson
It Makes Dogs Wary of Hands

Tapping on a dog's nose may therefore lead to a dog who becomes afraid of having hands anywhere near their faces and may also lead to defensive behaviors.
​
Because hands are connected to humans, it also wouldn't be surprising if on top of being wary of hands, affected dogs would also become wary of who delivers the "corrective tap," negatively affecting the dog's overall level of trust in such person.

As mentioned earlier, some people may use tapping on the nose or head as a way to entice (or perhaps, better say provoke) a dog into play. A while back, there was an (unfounded) belief that playing roughly with a puppy by tapping him on the face and head would make the puppy more protective.

Even though this practice may look innocent, especially when the puppy or dog responds by engaging in a play session, there are associated risks that make this practice counterproductive.
Karen Overall in the book "Clinical Behavioral Medicine for Small Animals" discourages this practice and explains that it may lead to inappropriate play and even aggression .

"It is a fallacy that if you play roughly with young puppies, particularly if you tap them about the face and head so that they snap, they will become more protective. This type of play only teaches the dog to play inappropriately and aggressively."~ Karen Overall

Tapping a dog on the nose ultimately doesn't teach the dog what behavior we are expecting from him. As seen, corrective taps teach dogs to fear hands (and the owner!) and can potentially trigger defensive behaviors.

What should dog owners do then when their dog engages in unwanted behaviors?

A great option is teaching the dog an alternate, incompatible behavior that can replace the undesirable one.

For instance, your "puppygator" nips your hands with his sharp teeth? Rather than tapping him on the nose, why not teach him (under the guidance of a trainer/behavior consultant) to gently tap instead your hands using his nose? This is called "targeting" and basically the puppy learns that great things happen when he makes "nose contact" with the owner's hands.

Indeed, every time the puppy makes nose contact with hands, he is rewarded with a treat tossed nearby him or is given access to a toy tossed on the floor. This way the puppy learns a different way to interact with peoples' hands rather than biting, he also learns to associate hands (and people) with rewards and has a replacement behavior that will keep him busy and happy! A win-win!

" Actions such as grabbing a dog and forcing it into a down, growling at the dog, and other aggressive behaviors directed toward the animal will only lead to the animal developing a "fight-or-flight" response where the animal fears for its life....When we engage in such behaviors toward our dogs, we are not telling the dog we are "boss," instead we are telling the dog we are dangerous creatures to be avoided or fought off. There is no "dominance" in these scenarios—only terror and the instinct to defend oneself against attack." ~Association of Professional Dog Trainers.