Whether you are looking for top quality soft toys, toys for professional chewers, toys to throw, puzzle toys to stimulate, chew toys and many more options, just have a look at the options we have available. All our products are top quality and we also have options for your kitty and small critters as well. In fact, just about everything you want for your pet! www.mcmac.co.za
Soft Toys And Some Behaviour Concerns Associated With Them To Be Aware Of

by Scotty Valadao - Friends of the Dog - Canine Behaviourist
​The majority of dogs enjoy having a soft toy. Some of them will even have a favourite one, spending a lot of time carrying it around (even taking to bed with them), snuggling up next to it, and object vehemently if another dog in the family even looks at it, or the owner tries to take possession. Other dogs love tossing the soft toy in the air, tear into it and try to shred it, or only show interest in the soft toy if it is thrown for them.

Many of the reasons why dogs act in different ways with soft toys comes down to breed. Two simple examples of this are that dogs that  are known to love chase and catch games, such as the Terrier breeds, enjoy chasing soft toys and toss them too and fro, often ripping them apart, while other breeds, such as Retrievers, which were have been bred to have a soft mouth and carry things around without damaging them (like a duck or rabbit for example), will tend to carry the soft toys around and not damage them- it often comes down to the reason why dogs were bred, that will determine the dogs interaction with the soft toy.

Some point to bear in mind 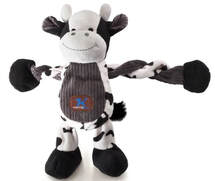 One of the Charming Pet K9 Tuff Range

Any type of resource guarding towards the toy.

Some dogs will become so attached to their toy, that they will refuse to release it when you request, and may growl at you, or offer similar behaviour that indicates that ‘this is mine!’ This type of behaviour must be stopped immediately, as it can often escalate, especially if the owner tries to remove the toy from the dog – even if just to be washed.

The manner in which we would change this resource guarding would be by teaching the simple Swap Exercise  and this link gives you full instructions as how to do this. What needs to be borne in mind, is that you would not immediately teach the Swap with the favourite soft toy – you would start with  toys of lesser value, and gradually build it up so that you could take the soft toy from the dog without a fight. While you are training the Swap, do not get into a confrontation with your dog over it – rather distract him from his favourite toy and quietly pick it up out of his sight line.

Resource guarding toy from other dogs with aggressive behaviour being shown.

A situation such as this needs to be dealt with by professionals, as aggression can quickly increase – get in touch with your vet and get the contact info of a canine behaviourist that practices positive reinforcement methods.

Until this situation is resolved, prevention is always better than cure, so offer the favourite soft toy to your dog in a separate area, making sure you take it away before the dogs are together again.

During the teaching period, avoid having a confrontation with the dog when he has the soft toy with him.

Obsessive Behaviour, which in the dog world is known as CCD (Canine Compulsive Disorder, is a behaviour that should be treated by professionals, and is normally due to various reasons, or even a combination of same. These conditions are normally high stress/anxiety (often long term) – lack of mental and physical stimulation, or the dog is left alone outside by itself, very often without sufficient social, mental and physical stimulation. Some dogs will only become obsessive about a soft toy when the owner is out – this is not true CCD, rather the dog may well be suffering from separation anxiety. The definition of separation anxiety, is that the behaviour the dog is engaging in to calm itself, occurs only when the owner is absent from the home.
​
What happens with CCD is that the dog will engage in behaviours that are natural to it, such as pacing, spinning, chasing its tail, carrying a toy around and so forth – the difference with CCD is that the behaviour is very extreme, very repetitive, and it seems to be impossible for the dog to stop the activity it is engaged in, which will impact on the dogs quality of life and make it very difficult for the dog to function  – this activity, believe it or not,  is actually helping the dog to cope.
​
Sucking excessively on the soft toy.

It the dog is sucking on the toy on occasion, and it does not bother you, just keep an eye on the behaviour to ensure it does not start to become excessive. If the dog is sucking the soft toy only when you are out, as above, this could be a sign of separation anxiety.
The majority of dogs we come across that do suck on soft toys, tend to have been taken away from their mothers before the 8 weeks – which is the ideal time to adopt out a puppy. Unfortunately, many un-reputable ‘breeders’, tend to put pups up for adoption at 5 to 6 weeks of age as they look so cute. The pup is being weaned far too soon from its mother, and pups such as this, normally end up being fearful and anxious/stressed, tend to over bond with their human, which leads to further behaviour problems in the future – the same applies to ‘Singleton Pups’ as well.

Unsterilized female dogs suddenly tend to ‘mother’ a soft toy. This is normally due to hormonal changes and the possible onset of a false pregnancy – this often occurs after a female has been in season and was not mater.

There is a variety of behaviours that may be exhibited  - carrying the soft toy around in the mouth – making a den, licking and cleaning the toy, and some females may become protective of the soft toy – whereas they never exhibited this behaviour previously.

What often happens at the same time, is that the unsterilized female will also exhibit normal signs, both physically and emotionally of being pregnant. If a false pregnancy is suspected, always refer to your vet.

There is absolutely nothing wrong with a dog enjoying soft toys – they have great fun with  them – just ensure that the behaviour does not become obsessive, that no resource guarding occurs, and that your dog is supplied with plenty of other things it loves – slow scenting walks – games with you and the family – mental stimulation by way of scent games and similar – loving time with its family – doing this, will help to ensure that you have a balanced dog and extreme behaviours will be a lot less likely to occur. ​