Please visit and LIKE our Facebook Page and share with family, friends and on your own Facebook page, and ask them to share further – it is only by working together and sharing knowledge and education that we can improve the lives of dogs and assist owners. We do not inundate you with posts – an average of 5 per week, and the odd Did You Know and General Post. Thank You!
How to get things out of your dog's mouth without a fight 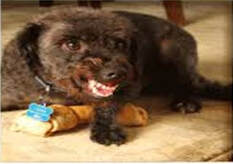 ​Do you know why dogs are often hesitant about releasing objects already in their control? Simple, we take the object away and don’t give it back! In these circumstances it is no wonder that a dog does not want to give up its possessions.

Scotty first saw this happen many years ago with a behaviourist that was visiting from overseas and was helping out a friend who had a German Short Haired Pointer, that would retrieve perfectly, but became aggressive when asked to ‘drop it’ with snarling and growling when handler held out hand to take the bird.

The behaviourist sent the dog out to retrieve and when the dog came back and started the snarling/growling, from behind her back (was tucked into the strap at the back of her jacket), she produced another bird and held it right in front of the dog. The dog looked at her and the bird in totally surprise – the behaviourist said ‘swap’ at the same time. A few seconds passed (which felt like forever), then the dog dropped the bird and took the one offered. She had a 2nd bird behind her back and did this again – the dog dropped the bird much quicker. She had a helper who stood behind her with other birds and the exercise was repeated several times. The problem was solved, and the dog looked lat her like she was liver – at last somebody had understood why he was so reluctant to part with his prize!

Teaching the Swap is one of the very basic exercises that every pup and dog should be taught.

There are two ways to teach this - one is to swap an item for a delicious piece of food for dogs that are food driven, and the other is for dogs that prefer toys to food - at the end of the day, it is a good idea to teach both.

Here you are going to use high quality and smelly treats, and a toy that is of low value and we do suggest the use of a tug rope. However, go and buy 2 small tug ropes that the dog has never seen before and which are identical - this prevents the situation whereby the dog may like one tug rope more than another. Using a tug rope gives us control over the situation as you am holding one end of the rope and are able to control the situation.


Hold the high value treats behind your back, and then with the other hand, start to get the pup/dog interested in pulling – and this is very important – don’t let the excitement levels raise, especially if doing with an older dog, rather the second the pup/dog starts pulling – bring the high value treat from behind your back and put in front of the pups nose, saying ‘swap’ at the same time.

As soon as the pup/dog takes the treat, immediately offer the toy again. This is repeated over and over. As the pup/dog becomes proficient, you can then lengthen the time he is allowed to tug.

Next step is to repeat with a higher value toy, and on a personal note, we work this up with our own dogs until we can achieve a swap with our dogs having a bone – yes, tasty liver is used in this case!

Hold the one rope toy in your hand, with the 2nd rope held out of sight behind your back and have a few seconds game of pullies -  again, don't let the dog get too excited . Then bring the other rope out from behind your back, offer it to your dog and say ‘swap’ at the same time. You may find that your dog looks totally startled but will then eagerly take the new rope. Here, if you want to, you can add in the cue of ‘thank you’. Repeat this over and over.

If at any time the dog the dog refuses to release the rope, take it away with the words ‘finished’ and walk away. After a few minutes, return to the dog and start again. Your dog will figure out very quickly that in order to keep this game going it needs to relinquish what is in its mouth.

You now start to ‘up the ante’ with the game by trying new and different objects gradually building up until you can say ‘swap’ from a distance and the dog will drop the object and come to you for the better one. Bear in mind that what you offer the dog in exchange must always be the same or better than the object it is holding e.g. a piece of kibble (dog cubes) does not take the place of a bone!

Don’t forget that this exercise needs to be practiced in different locations as well – different rooms in the house, in the garden, out for a walk etc and we do advise clients to practice both these options.