Should my dog wear his collar at home? 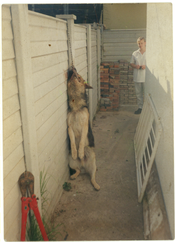 This picture, courtesy of SA Dog Training College (www.sadtc.co.za) is not featured here to shock you – it is to show you the reality of what can, and unfortunately, often does happen.

I first saw this picture round about 2003, when I did my instructors courses with SA Dog Training College, and the image has never left my mind. When I heard about another dog that had suffered the same fate as the one above, I asked SADTC to send me a copy and decided to write about it, hoping that people reading this will pass the message onto others as to how dangerous collars can actually be.

The majority of owners are under the impression that collars should be worn at home all the time. The collar gives the owners a sense of security if the dog goes walk-about, needs to be restrained and also allows the owner more control over the dog.

In reality your dog is much safer not wearing a collar at home, and from the point of view of worrying if it does get out and go walk-about, the insertion of a simple microchip will allow all vets and shelters to find out who the dog does belong too and contact the owners immediately.

Dogs that have fear of noises and professional escape artists are the dogs that are more at risk. I have worked with dogs with storm fear phobia wherein not only have they tried to go over the gate/wall, they have gone straight through windows to escape the perceived threat.

It is not only dogs such as above that are at risk. I had always kept my own dogs in collars at home, but about 30 odd years ago I added  a new puppy to my existing 2 dogs,  and one of the first things I did was get the pup used to wearing a collar. in a positive manner A few months later he was playing outside, and somehow managed to get the collar caught in the foot of a cast iron table. This ensued in total panic from the pup, with the other two dogs rushing in to attack and the whole table went flying, almost crushing the pup. I have never since had a dog that wore a collar at home as a safeguard.

I believe that unless a dog is wearing a collar with a release catch or if the owner is engaging in behavior modification and a collar is necessary while the owner is at home, that a dog should never wear a collar in the home, unless it is supervised.

Anyway, look at the picture, draw your own conclusions and please do pass on the possible dangers involved. There is also another article on collars below which gives you more information on other problems and health concerns that can occur.