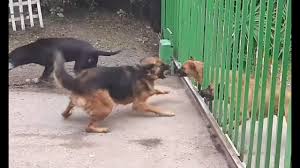 Aggression, no matter what type, should always involve the owner calling in the services of a canine behaiourist. Please ensure that the behaviourist is fully qualified and has had extensive experience - ask to see their qualificiations and ask what methods they use to change behaviour. The reply to this should be Positive Reinforcement - if they mention anything along the lines of prong or shock collars, stopping the dominance, or alpha rolling or jabbing your dog - run a mile - unfortunately there are still people using methods such as this, and these should not be contemplated.

Aggression should preferably never be tackled by owners themselves. Think about it, you would treat yourself if you had a headache, but if you had blinding pain, you would go to the doctor - get the help you and your dog needs, and sooner rather than later!
What is Redirected Aggression?

Putting it very simply - a  common example is when a dog is so over aroused and frustrated of being in a situation where he cannot access the trigger (perhaps another dog or person), that the dog redirects this over stimulation/frustration onto either a dog or person which is closeby. The dog is not doing this on purpose as many people think - it is no longer thinking, it is over aroused, and is lashing out at what is nearest him. This can happen with all breeds of dogs, however is more common in any breed that tend to  excite easily

This does not only occur with a dog that is showing aggression towards the trigger, it can also occur where a dog is extremely fearful, and the perceived threat comes a step too close to him, or in the case of a person, tries to actually touch the dog - the dog lashes out.

​Another common example, is where a dog has been severely inured and is in pain. Even tho' it may be the owner that goes to help, the pain levels may be so high, that the dog acts in a natural defensive manner, and just lashes out.

Here are some common examples of redirected aggression:-
​
Aggression at gates - this is one that many people will relate too! You have a situation where the dogs can see outside the gate, and a person with a dog walks by, even on the other side of the road. The dogs inside see this happening, and make a dash to the gate, already getting excited, and often barking. They can run back and forward and continaully becomming more and more aroused, especially if this is a situation that happens often - the anticipation of this can raise the arousal levels, and if the dog on the other side of the road, reacts back with lunging, barking, or any other type of aggressive behaviour, the arousal levels will also increase.

When the arousal level becomes too high, one dog may suddenly lash out the the other dog, and this can be just a snap or lunge, or a bite - however, if the other dog retaliates, this can escalate into a full blown fight. Unfortunately, as we mentioned above, this type of behaviour tends to occur more and more if a solution is not found to prevent the dogs going to the gate, and the severity of the fights will escalate accordingly.

It could also occur that the dog that did not instigate the aggression, can become very fearful in general, and the relationship between the dogs can completely change, with the initial aggressor becoming more of a 'bully' towards the other dog in general.

This type of aggression is also common in the shelter environment (barrier aggression), especially when you have several dogs in a run. The dogs will become over excited when other dogs or people walk by, and the end result is often redirected aggression towards another dog/s in the run.

In addition to gates, a similar situation can occur when you have more than one dog engaging in fence aggression with the dog next door - redirected aggression can be the outcome.

Situations such as aggression at gates, exhibited by the dogs behind the gates, is one of the reasons why we suggest to our clients to never walk their dogs in the street where there are dogs behind gates - this is why:-
​
Dog Fights and over arousal - ​it does not even have to be a dog fight, it could be dogs playing where the play has resulted in arousal levels becomming too high. The owner goes to stop the aggressor by catching hold of the collar, and the dog lashes out at the owner - again, not on purpose.

Redirected aggression at doors  - this tends to happen a lot with doorbells being rung, especially in complexes, where the security will ring the home owner to say a visitor is arriving. The dogs become more and more excited waiting for the door to open, and as the door opens, the one dog turns on the other dog. Here as well, there could be redirected aggression towards the owner, if they grab onto the collar or attempt to stop the dogs fighting.

In dog parks and dog social situations - when this happens, what has normally occurred, is that two dogs were playing happily together, lets say a Lab and a Terrier, and a strange dog, which is a German Shelherd comes over, the playing stops, and the dogs start to check each other out. It could occur that one of the dogs has quickly decided that this new dog is not a threat (normally the Lab as they seem to believe on average that the whole world loves them!), and wants to keep on playing with the Terrier it was playing with before, so it goes into play mode again and tries to engage the Terrier in play. However, the Terrier has not yet decided that the German Shepherd offers no threat, and its tension levels are a bit high - as the Lab tries to engage its Terrier friend in play again, the Terrier turns  and lashes out at the Lab.

Over arousal on walks  redirected aggression always results when the arousal levels have gone far too high, and this can even happen when an owner is taking its dog for a walk and it becomes over aroused and turns and nips the owner on the leg. This could occur as it walks past a gate with dogs acting aggressively inside, and we have seen this happen even before the owner and dog walked past a particular gate - the dog was anticipating the dogs being at the gate and had become totally over aroused.

It can even be that it invovles the dogs prey drive - the dog sees a squirrel run up a tree, becomes totally over excited, and the more the owner holds onto the lead and tries to stop the dog, quieten  the more over aroused it become, and suddenly lashes out at the owner.

Aggression, in any shape or form, should always be handled by a canine behaviourist with experience in aggression, as we mentioned above. There will be a lot more at play here than just the redirected aggression - there will be factors contributing to this behaviour, and this is where a qualified behaviourist can assist.

They will send you a very comprehensive questionnaire, which gives them insight into your relationship with your dog, as well as the relationship with the other dog in the home, and factors that could be contributing to the behaviour and which need to be looked at. When you have the session with the behaviourist at your home, in addition to observing the dogs, they may ask you additional questions. This will give the behaviourist the information they need to put together the specific behaviour modifications that need to be implemented, including management of the situation.
​www.animal-behaviour.org.za and https://www.friendsofthedog.co.za/canine-behaviourists.html.