The Physiologic Effects of Fear
By Valarie V. Tynes, DVM, DACVB
VETERINARY MEDICINE
http://veterinarynews.dvm360.com
​(This is really a great site with a wealth of information on it)
Fear or anxiety is more than just an emotional problem for pets—it has the potential to cause many serious physical health problems and contribute to several others. Veterinarians, therefore, have an obligation to make all efforts to reduce the incidence of fear in the clinic and at home.

Fear and anxiety are often spoken in the same breath, but it is helpful to keep in mind that they are not the same thing. They share many similar physiologic responses, but fear should be adaptive when it helps an animal escape from a situation that is truly dangerous. However, both fear and anxiety can lead to great stress when they are chronic or unrelenting or when an animal is unable to change its behavior in such a way as to be better able to cope with the situation or the environment that it finds threatening.

Fear
​
Fear, by definition, is an emotion that induces an animal to avoid situations and activities that may be dangerous. The emotional response occurs when an animal perceives that something or someone is dangerous. The key word here is perceives. It is critical that veterinarians and pet owners understand that just because they do not think the person, event, or thing is to be feared does not mean that the fear is not real to the pet. A pet's perception is its reality, and that is what the pet will act on. 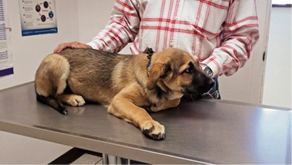 This puppy shows several signs of fear, including lowered ears and head, avoidance of eye contact, a furrowed brow, and visible whites of his eyes. Part of his discomfort is associated with the fact that he can’t gain purchase on the slippery exam table—his front legs and toes are splayed in an attempt to grasp the surface and stand.
When pets cannot escape a fearful stimuli, they may freeze or they may fight. This, in many cases, is a perfectly normal adaptive response. Sadly, when pets in the veterinary clinic choose to freeze and tolerate our handling, we continue to restrain and handle them in a way that they find threatening without attending to the fact that they are frightened. Thus, they learn that freezing is not the best strategy, and this increases the chance that they will struggle or fight harder during the next visit.

Veterinarians and veterinary staff should be cognizant of a fearful, compliant animal and attempt to make the visit as pleasant as possible by moving slowly, handling the animal extremely gently with a minimum of restraint, talking quietly, and plying the patient with special food treats before, during, and after the appointment. This type of collaborative effort, where handlers stay attuned to an animal's behavior and change their own behavior appropriately, results in less stressful appointments for everyone. Animals whose appointment ends with a pleasant, positive experience are more likely to leave with that pleasant memory rather than a powerful memory of a fearful experience.

Many pets, for reasons that we are just now beginning to understand, perceive threats where none exist and may truly be suffering from a pathologic degree of fear or anxiety. Without a better understanding of normal animal behavior and an awareness of how our patients are learning from their experiences with us, these patients may be overlooked or their behavior may be misinterpreted, especially in cases in which an animal's history is unknown.

Animals that have been through the shelter system are a good example. When these dogs or cats demonstrate fearful or anxious behavior, it is common for pet owners to simply shrug and say that the pet must have been abused. While this is certainly possible, what must be equally considered is that many fearful and anxious animals are born with these behavioral pathologies. These behaviors, often referred to as shyness or fearfulness by different researchers, have been found to be highly heritable, and the more quickly the problems are recognized and dealt with, the more likely the animal can be helped. Ignoring the problem only extends the animal's suffering—and that should be unacceptable.

Anxiety
​
Anxiety is the anticipation of future danger that may be unknown, imagined, or real. It can result in physiologic responses similar to those associated with fear. The animal may begin to pace, pant, tremble, and salivate. Pupils dilate and heart rate, blood pressure, and respiratory rate may increase. Anxious or fearful animals may exhibit avoidance behaviors such as hiding and may be hypervigilant—constantly on alert—and possibly even startle at the slightest sudden stimuli. In the case of intense fear, an animal may lose bladder and bowel control and may express its anal sacs.
Animals that live in a constant state of anxiety are not normal nor healthy. Just because their behavior is not a concern for their owners does not mean it should not be a concern to us. As the pet's advocate, we must ask questions about the pet's behavioral responses in a variety of environments so that we can determine if the behaviors we are seeing in the clinic are typical for the pet. If the pet is commonly anxious or fearful about many novel situations, it may need behavioral help.

This is not unlike the many years that we have spent lifting the gums of animals and showing the owners tartar, trying to teach them that just because this did not bother them did not mean it was not a health concern for the pet. Anxiety is no more an esthetic or cosmetic issue than periodontal disease is; anxiety has an effect on virtually every system in the body, not unlike periodontal disease.

Stress is a concept that comes into play as well. For our purposes, it might be best defined as any chemical, physical, or emotional force that threatens an organism's homeostasis.
While a certain amount of anxiety or fear may be adaptive in some situations, an animal that experiences fear or anxiety frequently, especially if unable to safely escape from fear-inducing stimuli, will begin to suffer from stress and its effects. Since the initial result of fear and anxiety is a physiologic one involving autonomic arousal and stimulation of the hypothalamic-pituitary-adrenal axis (and accompanying release of stress hormones), eventually the animal can suffer physical harm such as an increased susceptibility to disease secondary to suppression of the immune system.

Phobia is the final term to consider. Phobias are persistent and excessive fears of certain things or situations that are usually out of proportion to the actual threat that they present. Animals anticipating exposure to these stimuli will often display anxiety. An animal's response to actual exposure to the stimuli can result in a range of responses from relatively mild signs of anxiety to extreme panic and even catatonia. Serious injury may occur when animals exhibit such a severe panic response that they chew or tear through doors or windows in an apparent attempt to escape from the frightening stimuli. It is not uncommon for these phobic responses to become increasingly severe with every repeated exposure to the frightening stimulus.

Sadly, phobias are quite common in dogs, and many dogs exhibit phobic responses to loud noises such as fireworks, thunderstorms, and fire alarms. Some animals are so frightened by their experiences at the veterinary clinic that their responses on subsequent visits could be defined as phobic. It should not be acceptable to have to drag a leashed animal into your reception area and onto a scale.