Puppies as Presents
by Belinda Thomas 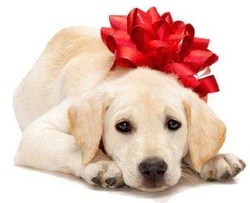 Some years ago, before my hubby & I were married, I had mentioned to him that I would like to get a horse of my own -one day. A couple of months later, my birthday rolls around and the ’love of my life’ whisks me off to a nearby stable yard, where he then scurries off and soon reappears leading a HUGE black horse behind him, with a big red bow tied around the its neck, and proudly shouts “Happy Birthday”. I was shocked. Carling was a 16.2 hand Thoroughbred who was afraid of his

own shadow and had only ended his racing career a month before – not a horse I would have even considered buying for myself, not only because of his size. I would have preferred something a bit smaller and a tad more bombproof. While his intentions were good, he only bought this creature based on the fact that I had said I was thinking about getting a horse. He honestly thought that he was giving me the best possible gift, without realizing the amount of thought and research that one needs to put into find that special horse just for you. While a horse is quite a bit larger than a puppy, the

principle is the same and animals should not be given as gifts - ever.

To be blunt, puppies make the WORST presents. A puppy (or any other animal) should never be given a present -not to family members - not even to your kids. Dogs are not toys.

The choice of a breed of dog is personal one. What I like in a certain breed, the person who I’m giving it to may not. For example, I love Labradors. I do Agility and Manwork, and compete in working trials, so I like that my Labrador bitch is so full of energy and drive sometimes to the point where her heads seem about to explode. I don’t mind that I no longer have plants in my garden or that I cannot walk around my garden at night without a torch for fear of falling into a hole that they have dug. It doesn’t bother me that everything in my house needs to be kept above tail height for fear of it being knocked over & broken by a swishing tail. How many people would put up with that?

A lot of my friends don’t share my love of Labradors. No matter what we say, personal likes and dislikes come into play here. If someone gave me a Bulldog as a present, I would be absolutely miserable. I think they are adorable dogs; but, not a breed that I would buy for myself. Can you imagine a Bulldog running an agility course with the speed of a Border Collie?

The timing of getting a puppy is also personal. Here are some scenarios to consider…

Your brother and his wife may have mentioned that they would like to get a puppy. So you buy them one for their anniversary. However, you didn’t know that they were having problems with their marriage and are now getting divorced. That little puppy either ends up caught in a battle between them or dumped at a shelter because neither one of them can take the puppy with them.

Your cousin tells you that she would love a Jack Russell SOMEDAY. You buy her one for Christmas. However, her and her husband have just found out that they have a baby on the way and can’t devote time to both puppy and the baby. One of them has to go. Somehow, I don’t think it’s going to be the kid.

Or your 90 year old Great Aunt Gertrude loves Boxers, so you give her one for her birthday. But Aunt Gertie has had a hip replacement and she’s not as sprightly as she used to be. A boisterous Boxer puppy is the last thing she can deal with right now. The dog ends up being neglected and both are miserable.

Your present of a living, breathing creature was not such a good idea. There are a lot more things to consider that just “Someday I’d like to have…”.

One also needs to consider medical issues – for the humans in the house. Is anyone in the household allergic to animals? Is the person physically able to care for the animal? Can the person look after an animal that may develop medical issues? My Labrador, Murphy, developed allergies at the age of 18 months and will be on medication for the rest of his life. I can deal with that, but would someone else be able to or even want to.

Still not convinced…?. Then how about this: There is also the time factor involved in the owning and taking care of a dog. A puppy needs almost as much time and effort as a child with regards to properly training and socialising it. What about cost? Buying the puppy is the cheap part. It’s the expenses after you get the puppy that mount up.

A puppy can cost easily cost R11,000 in the first year of it’s life and this is just for the necessities such as food, vaccinations etc. Once he’s older, that cost reduces to somewhere around R9,000 per year – still a whack of money.

Your niece and nephew have been begging you for a puppy for months. You do realise that Mom and Dad will end up being the primary care taker for this animal, no matter what the kids may say. Let’s face it, kids are kids and very few are able to be solely responsible for a pet. Kids can be sneaky little things, they may try to manipulate someone else into getting them that puppy when Mom or Dad say “no”. Don’t give in, if Mom and Dad have said “no”, then stick by their decision. Sometimes doing the right thing means saying “no”.

If your cousin is looking for a puppy, rather make a “gift certificate” saying that you will pay for the puppy or for the a puppy socialising course. Or wait until she actually has the dog and get a gift voucher to a pet shop.

If they are dog lovers, but aren’t ready for a dog right now, give a donation in their name to the local animal shelter. There are lots of things that you can do that don’t involve giving the gift of a live animal.

Dogs are not just accessories you grab off a rack, stuff in a box and hand out merrily. The commitment to a pet must last the lifetime of that animal, not just on Christmas Day or a birthda

If your cousin is looking for a puppy, rather make a “gift certificate” saying that you will pay for the puppy or not just on Christmas Day or a birthday.