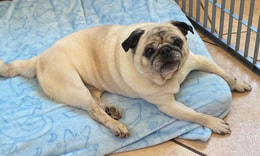 Pic. Pug Rescue SA - details below. If you are looking for a Pug, please consider rescue first and foremost. if Pug Rescue SA is not near you, do search for another rescue in your area. https://www.facebook.com/PugRescueSA/
The Pug is one of the oldest breeds known today, believed to have originated in China before 400 BC. The exact origins of the pug are unknown because Emperor Qin Shi Huang - the first Emperor of China - destroyed all records, scrolls and art related to the pug at some point during his reign, which lasted between 221 and 210 BCE. There is, however, somewhat of a debate over this. Most researchers agree that they descended from a shorthaired Pekingese, another theory is that they are the result of crossing a small Bulldog, while others speculate that they are a miniature form of the French Mastiff.

This breed only became popular in the 1860 when the British took over the Chinese Imperial Palace and discovered several Pugs, they took the dogs back to England with them where their popularity grew.

Known in ancient China as lo-sze, pugs may have been responsible for the English Bulldog, the modern Pekingese and the King Charles spaniel.

The pug is a toy dog with a wrinkly, short-muzzled face and a tail that curls tightly over the hip. The breed has a compact square body with well-developed muscle and a glossy coat that comes in a variety of colors from fawn, apricot fawn, silver fawn, or black.

Although Pugs were bred to adorn the laps of the Chinese sovereigns during the Shang dynasty their other talents include: watchdog and performing tricks.

These dogs are known for having big personalities in small bodies. They are intelligent, keen, happy-go-lucky, animated, peppy, spirited, loyal, loving, affectionate with their families, playful, lively and rambunctious - and are sure to keep you laughing. Pugs are strong willed but rarely aggressive, and can be quiet and docile but also vivacious and teasing.

Pugs are relatively inactive indoors and will do okay without a yard, so they make good apartment pets. They are sensitive to hot or cold weather and should be kept indoors at a comfortable temperature

They are devoted and make good watchdogs, they will let you know when someone is at the gate but they are not yappers and don’t bark unnecessarily.

It is important to socialize them from a young age or they can become jealous, and begin to display guarding behaviors, such as guarding furniture, food, toys, or other sorts in the house.

Although these dogs don’t need a lot of exercise they will keep in better health if given regular exercise; daily walks of half an hour to an hour will be enough, they also enjoy energetic games. But be careful not to overdo it, because of the short nose they can overheat easily or struggle to breathe and start to wheeze. So in warm weather it is best to keep the exercise to the minimum.

These dogs were bred as lapdogs and they love nothing more that to be in human companionship as much as possible. They will sometimes do very strange and funny things to get your attention. They are definitely not backyard dogs and don’t do well when left alone for long periods of time.

Because Pugs have brachycephalic (short-head) skulls, including compressed sinus and oral cavities. They can’t control the fluids that leak from the sinus, they have wet noses, and they wipe their mucus and tears all over their owners.

In a nutshell, Pugs are for you if you:

Which other breeds are most compatible with the Pug?

Pugs will get along with most other breeds of dog, just keep in mind that they are small dogs and can get huts by larger breed dogs.

A good choice of breed would naturally be another Pug, Boxer, Greyhound, Labrador (although they can be very boisterous when young and may play a bit rough, but they calm down as they get older)

Herding dogs (collies, Australian shepherds, etc) might not be the best choice as they tend to try and "herd" and nip at a running pug.

Dogs like Pit Bulls or Staffies can get irritated by the pugs clownish nature and this can lead to disaster.

Pugs get along well with other dogs and pets, they are not aggressive or dominant and don’t mind sharing their space with others as long as they get all the attention they need.

This breed is suitable for families with children, they are very fond of children and sturdy enough to properly play with them. However, Pug puppies are very small and vulnerable and children should be supervised to prevent them  hurting the puppies by accident.

They also behave impeccably with visitors, even strangers, although puppy school and early socialization is required

Pugs strife to please their owners and will do everything to gain approval, however they can be a bit stubborn and aren't as easy to train as many other breeds.

They don’t respond well to harsh punishment or training techniques, they need an owner who is calm, firm, confident and consistent. With enough patience and positive reinforcement they are very trainable and they love learning and performing tricks.

Grooming these dogs is not very expensive but it is a daily job.

Due to their short faces they have a lot of wrinkles that collect moisture, and can lead to growth of fungi and bacteria. To prevent this, the wrinkles need to be cleaned out daily. The same goes for their floppy ears, they tend to be moist inside and need cleaning twice a week.

Like most dogs baths are not needed very often, frequent baths can dry and irritate the skin - once a month should be enough.

Only occasional brushing is needed but because they are heavy shedders this can be done daily to reduce the hairs in your home, it also stimulates natural oil production in the skin. Their claws also grow quickly and need to trimmed regularly if they don’t wear them down naturally

This small breed is prone to quite a few health problems, this is not to say that they are guaranteed to have health issues just that there is more that can go wrong. Most Pugs live long healthy lives.

Some of the issues include:

Their life expectancy is 11 to 15 years.
Interesting Facts


o    Queen Victoria had many pugs, which she bred herself, included Olga, Pedro, Minka, Fatima and Venus.
o    Prince William II, one dog in particular was said to have saved his life in 1572 at Hermingny, when the dog barked at approaching Spaniards alerting him of their presence.
o    In France, Napoleon's wife Josephine had a Pug named Fortune. On their wedding night, when Napoleon refused to allow the dog to sleep in their bed, Josephine told him, "If the Pug does not sleep in our bed, neither do I!" When Josephine was sent to prison she used the little dog to send secret messages to her husband by placing a note under the collar of her Pug.
o    The artist Hogarth had a Pug named "Trump" that he often depicted in his works.