https://iheartdogs.com - they have some great blogs, plus lots of great goodies to buy for your dogs!
Some dogs love to run, others like to retrieve, and some can’t stop themselves from chasing anything that moves! Those pups most likely have a high prey drive.
Dogs with high prey drives have strong instincts to hunt. They tend to go after moving objects, whether they’re birds, critters, or leaves blowing in the wind! These dogs are energetic and intelligent, but they can be a handful if they don’t have a productive way to expel all that energy.
​
Below are 12 dog breeds with some of the highest prey drives – in no particular order.

1. Rhodesian Ridgeback
​
Originally bred to hunt lions and big game in Africa, Rhodesian Ridgebacks have an intense desire to hunt and track. Occasionally the scent may lead them to some of the neighborhood cats, so make sure they’re always leashed or in a safe, enclosed area. These pups also make great guard dogs.

2. Airedale Terrier
​
Airedales were bred to track and trap otters, hence, their high prey drive. They are the largest dogs in the terrier group. Today, this majestic looking dog still enjoys digging and flushing out prairie dogs, squirrels and rabbits. If your high-energy Airedale has more get-up-and-go than you do, check out these 10 Simple Tricks To Tire Out Your Active Dog.

Also known as the Mexican Hairless Dog, this breed has been known as the “little doctor” for the heat they emit, comforting those needing warmth. This snuggler is content to cuddle until a small creature, like a squirrel, comes into view… then the Xoloitzcuintli “Show-lo” will abandon the quiet time to go on the hunt. 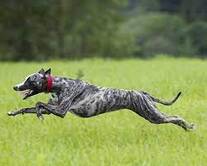 ​The Greyhound has a long and lustrous history, spanning back almost a thousand years. Most of society today equates this breed with the racetrack. Greyhounds are incredibly laid back and prefer to lie in front of a cozy fire rather than do anything else… unless a furry animal scurries across their line of vision, then you’ll see just how fast their high prey drive can make a Greyhound run.

5. SalukiThe Saluki is a beautiful and aloof breed. Saluki dogs can run up to 40 mph. Those speeds worked well two hundred years ago when Salukis were expected to chase down gazelles. Today, the modern Saluki enjoys a quieter life chasing squirrels and rabbits.

​The Pharaoh Hound originated around 3000 BC in the Mediterranean. Pharaoh Hounds were used to hunt and chase small game. Today, they are laid back dogs, and content to hang with their humans. Still, he has a high prey drive and strong instinct to hunt squirrels, rabbits and other critters.

The tallest of all the breeds, the Irish Wolfhound fancies itself a lap dog. This calm breed enjoys the company of their human and is content to amble at a quiet, unobtrusive pace… until they catch a glimpse of a creature scurrying in the opposite direction.

Allegedly bred for pit fighting in the nineteenth century, the Bull Terrier has mellowed considerably over the past couple of centuries. Today a lovable companion dog to their humans, there still is a streak of fierceness where small animals are concerned.

Some English Springer Spaniel enthusiasts believe this breed’s high prey drive makes it the original and best dog for hunting. Bred to flush out quarry, the instinct is still high to rush forward and scare small animals from their hiding places. 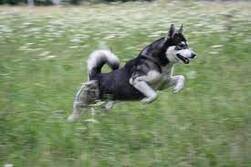 Bred to pull sleds and herd reindeer, Huskies’ high prey drive means they like to chase and capture small animals such as chickens, squirrels and sometimes house cats. While Huskies can live in harmony with other small pets, make sure they meet before putting them under the same roof, just to be safe.

Chihuahuas are feisty! They tend to be reactive to moving objects, but this may have more to do with their “small but mighty” guard dog skills rather than their need to hunt.