Can Large Breed and Small Breeds Really Mate and Have Puppies?

I've seen some pretty awesome puppies produced from mixing dog breeds! This got me thinking about all the different dog breeds, big and small. I wondered if they could even breed. My curiosity got the best of me and I dug into some good information and discovered the answer.

"Can a big dog breed with a small dog? "Yes, big dogs can breed with small dogs, but without careful consideration, it can be harmful or even fatal!
Today we’re going to take a closer look at the issue. Get the facts straight. I’m going to save you some time and share everything I’ve learned from research, veterinarians, breeders, and people who own mixed breeds regarding breeding a big dog with a small dog. This article will go over: I’ll share photos of some unusual mixed breeds involving big dogs and small dogs, and take a look at a related topic, as well. However, I refuse to go one step further until we take a close look at the most important topic when it comes to breeding dogs…

​I have nothing against responsible breeding at all! That being said, did you know that in the United States alone, 670,000 unwanted dogs are euthanized every year? Tragic! Please ensure that every canine pregnancy is a planned pregnancy. You can do this by keeping a female in heat away from all males dogs unless your intent is to have her bred. I know we ALL want to be the most responsible pet owners we can possibly be!
Now let’s get down to some serious talk about breeding big dogs with small dogs…

Can Small Dogs Have Big Puppies?

Image by Melanie Celliers
Bart is the name of the young dog in the photograph above. Bart’s father was a Pitt-Bull and his mother, a Dachshund. The pregnancy that produced Bart was unplanned and proved fatal to the mother. Bart was raised by human hands without ever knowing his mother’s touch. If the parent situation were reversed, and the mother was the Pitt-Bull and father, the Dachshund, the outcome would have certainly been different!

Results like in Bart’s case happen all too often with unplanned pregnancies. However, there are also instances of planned pregnancies in small dogs having excellent (and adorable) outcomes! When it comes to breeding a small female with a larger male dog, common sense and expert veterinary supervision go hand in hand. Birth by Cesarian Section is often required, depending on the size of the canine fetuses.
​
Breeding a small female with a larger male dog is a decision that should be made with expert counsel and the dog owner must be made aware that the pregnancy will be a high risk to the female and her puppy fetuses. 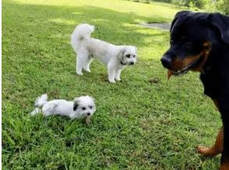 How Much Bigger can the Male Dog be than the Female?

Pictured just above are three different sized dogs; small, medium, and large. Right away we can see that if that Rottweiler bred with the smallest dog, it would be disastrous! Even fatal! Now, if the medium-sized dog in the photograph was female, there would be less of a risk imposed by the Rottweiler should they mate.

If the Rottweiler were the female and the other two dogs pictured were males, there would be no issues at all with the Rottweiler’s pregnancy or birthing process! The only problem in that scenario might be the male reaching the Rottie to mate, LOL!

Artificial insemination is often the answer to that dilemma.

Are you starting to see how it works (or doesn’t)?
​
Some animals, like female horses, for example, have mechanisms to limit the growth of their fetus to fit the horse’s uterus. This protects the mother should she have been impregnated by a horse much larger than she is. Dogs do NOT have the same mechanisms! If a dog has several fetuses in her womb, their growth will be naturally curbed to allow for space. If there is only one fetus, though, it will certainly be too large (if the father was large and the mother small) to be delivered naturally.

I would be remiss not to mention that pregnancy and delivery aren’t the only issues concerning breeding a small female with a larger dog. The mating itself could be dangerous (or fatal)! A female dog’s vagina is proportionate to her body size as is a large male dog’s penis. The tearing of her vagina is certainly a possibility.

Additionally, the dogs will stay united for more than half an hour when the male has ejaculated. During this time, it’s not uncommon for the dogs to move around, even run, while they are still “locked” together. As you can imagine, this could be extremely dangerous (or fatal) to the smaller female.

To reiterate, only breed a small female with a bigger male dog under expert advice and supervision. Whether the pregnancy was intentional or not frequent veterinary observation must be provided for the smaller female, and all veterinary advice and recommendations should be heeded.

Can Big Dogs Breed with Coyotes or Wolves?

Since they are all the same species, a big dog can absolutely breed with coyotes or wolves. There are slight differences in the female’s cycles among the animals and slight differences in parenting, but the animals CAN breed. A pup produced from a dog and a coyote is called a Coydog. When a dog mates with a wolf, they produce a Wolfdog. Not very creative names for sure, but efficient nonetheless.
Is There a Chihuahua/Great Dane Mix?

From what we’ve learned so far, a small female Chihuahua would be in a world of peril were she to be mounted by a male Great Dane! Unfortunately, this hasn’t stopped humans from attempting that which should probably not be attempted! The humans’ attempts, however, have been deemed as failures and (thankfully) reputable breeders have steered clear of this particular mixing of breeds. Without question, there are less than reputable breeders working on it as I type.
It stands to reason that a small male Chihuahua could possibly mate with a Great Dane female (or artificial insemination could occur) but because it hasn’t been done, the results of such a coupling as this are unavailable. Oh, there are stories about it out there, but we all know not everything we read on the internet is true.
​
Should an officially recognized mixing of a Chihuahua and a Great Dane occur in the future, I’ll be right on top of the story, grabbing all the details to share with you!

Below you’ll find some examples of what the products of different sized dogs that breed look like. It’s fairly common for medium-sized dogs and small dogs to be breed with few complications. It’s only when the male is large and the female is small that BIG problems can arise