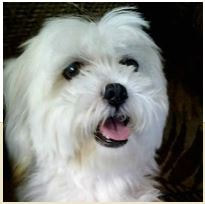 Pic from SA Maltese Rescue and their contact info below. If you are considering a dog, do have a look at rescue centres first - they are very good at pairing the right dog with right owner. If link below out of your area, do search for Maltese rescue in other areas. https://maltese.rescueme.org/za
The true origin of Maltese is still debated:


The oldest record of this breed was found on a Greek amphora found in the Etruscan town of Vulci, in which a Maltese-like dog is portrayed along with the word Μελιταιε (Melitaie). Archaeologists date this ancient Athenian product to the decades around 500 BC. References to the dog can also be found in Ancient Greek and Roman literature.

Around the 17th and 18th centuries, some breeders decided to "improve" the breed, by making it smaller still. Linnaeus wrote in 1792 that these dogs were about the size of a squirrel. The breed nearly disappeared and was crossbred with other small dogs such as Poodles and miniature Spaniels. In the early 19th century, there were as many as nine different breeds of Maltese dog.

These charming lap dogs were kept as pets and were favorites among the ladies who carried them around in their sleeves and slept with them in their beds. It is thought by many that the breed is a direct ancestor of other toy breeds - Bichon Frise, Bolognese and Havanese.

The Maltese is a small hardy compact, fine-boned, but sturdy dog. They have large dark eyes and a silky, single layer coat that is white or light ivory and can be straight, curly or woolly hair

The Maltese has a spunky determination that is in inverse ratio to their size. They are intelligent, spirited, lively, keen and individualist as well as gentle, affectionate, loving, trusting and devoted to their master. They are extremely lively and playful, and even as they age, their energy level and playful demeanor remain fairly constant. They are known as the best therapy dogs in the world because of their extremely loving nature.

The Maltese is very active within a house, and, preferring enclosed spaces, does very well with small yards. For this reason, the breed fares well in apartments and town houses, they are definitely indoor dogs who would not do well in extremes of outdoor temperatures.

They are extremely responsive to their environment and quick to sound the alarm in case of suspicious noises, thus making them very effective watchdog. However, because of their love for people they make horrible guard dogs as they are more likely to lick you to death.

These dogs don’t need a lot of exercise. They love to play and this will take care of a lot of their exercise needs, they also enjoy a good romp in a safe, open area off lead. However a daily walk is highly recommended as this not only exercises them physically but mentally as well.

Maltese are bred to be cuddly companion dogs, and thrive on love and attention. If they don’t get the human attention they need they can suffer from separation anxiety which results in excessive barking and destructiveness.

Like a lot of small breeds the Maltese is prone to developing Small Dog Syndrome, this is where the dog believes that they are boss and is due to the fact that the owner is too lenient with them and lets them get away with more that they should because they are so small and cute. This can lead to the dog becoming snappish with children/adults, jealous of visitors, guarding and obsessive barking. To prevent this you need to give this dog rules, and limits to what they are and are not allowed to do; be firm and consistent.

In a nutshell, the Maltese Poodle is for you if you:

Only from reputable breeders! One can contact the Kennel Union Of South Africa (KUSA). They have a list of breeders who have puppies available or you can try one of the KUSA affiliated breed clubs.

Which other breeds are most compatible with the Maltese Poodle?

Any breed with a good temperament will be fine with your Maltese. Rambunctious breeds like the boxer may be a little rough during play and can accidently hurt the Maltese.

But if you want a larger breed just keep in mind that due to their size they can accidently hurt the Maltese. Good breeds to go for would be the Greyhound, Labrador (although they are quite rambunctious when young), Saint Bernarg (they are naturally careful around small dogs), Wolfhound, etc.


Please read ‘Placing Littermates in the same home’ and ‘Double Trouble – (why you should not get two puppies)’ on our website for more information.

They do well with other dogs as well as non-canine pets. Keep in mind that, like with all dogs, the level at which these dogs get along with other animals depends greatly on how well they were socialized as pups

They are not recommended for families with young children as they tend to handle the dogs roughly, this can cause the dogs to be snappish and they should not be left unsupervised with young children. Other than small children they adore humans, and prefer to stay near them. Even strangers will be seen as attention givers.

Because of this dogs intelligence and eagerness to please they are easy to train and will learn tricks quickly. However; they will not respond well to rough training; they need someone who is patient, consistent and gentle using positive reinforcement techniques. They can be a little hard to house train. Just because this is a small breed does not mean it should not go to puppy school. Puppy school forms the social foundation of your pups future life and should never be missed.

The amount of grooming depends on the cut of the of the dog - show cut or puppy cut.

For the show cut the hair is kept long (about 22cm) and hangs over the sides of the body with a centre part. They need to be brushed daily to keep their coat healthy and prevent matting, but be gentle, as the coat is very soft. They will also need professional grooming every 4 to 6 weeks

The puppy cut is where the hair get clipped to 1 - 2cm all over, it makes the dog resemble a puppy. They only need to be brushed occasionally and go to the professional groomer every 8 to 12 weeks to get clipped.

Daily cleaning for both cuts include cleaning the eyes daily to prevent tear-staining, and the beard after meals for the same reason. They only need a bath once every  6 weeks, although some owners bath them weekly, but this is not ideal as it removes the natural oils and can dry their skin out.

Some may be difficult to feed with weak, upset digestion. They may get the chills, and they experience discomfort in hot weather. They are also susceptible to "reverse sneezing," which sounds like a honking, snorting, or gagging sound and results often from overexcitement, play, allergies, or upon waking up. It is not life threatening or dangerous, it will go away after about a minute.

Beware of breeders who offer "tea cup" Maltese. A Maltese under four pounds is more prone to genetic disorders and is at a higher health risk in general.