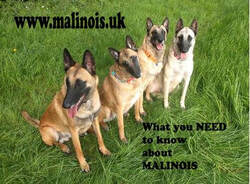 Pic from Malinois Rescue UK, and contact below. if you are looking for one, please do consider rescue first. details for above rescue below, but if not in your area, do search for one closer. Breed rescue orgs are very good at matching the dog and owner. https://www.malinois.uk/rescue.html
The Malinois (pronounced mal-in-wah) is one of four varieties (Malinois, Tervuren, lakenois and Groenendael) within the Belgian Shepherd Dog breed - they are distinguished only by a variation of coat type and colour:


All four originated in Belgium and the Malinois was named after the town of Malines. Because of their fawn-colored coat and black mask they are often mistaken for small German Shepherds, but the Belgian Malinois is a distinct breed on their own. They were carefully bred to be resilient and dependable farm and field workers and were introduced to the United States in the early 1900s, however, they did not truly catch on until the1960s.

Today, the Belgian Malinois is primarily used as working dogs for personal protection, detection of odours (explosives, accelerants and narcotics), police work, search and rescue (tracking), a guide for the blind and assistant to the disabled. They also do well in sports events like agility trials, obedience, showmanship, flyball, tracking, herding and sled and cart pulling.

They are medium-sized, light, square-proportioned dog with a deep chest, almond-shaped brown eyes, erect triangular ears and a strong tail. The weather resistant, double-coat is short and straight and comes in rich fawn to mahogany to black, with black mask and ears.

Malinois temperament ranges from aloof to outgoing, they are highly intelligent loyal, active, friendly, affectionate and lively with a great sense of humour. They are also obedient, determined and observant with strong protective and territorial instincts but can be reserved at times, especially if they did not receive sufficient socialization when young.

The Belgian Malinois will do okay in an apartment if it is sufficiently exercised, however, they need a lot of exercise and will do best with at least an average-sized yard. Because of their high prey drive they will chase cars, so it is very important to make sure they can’t escape from the yard and to let them off lead only in areas in which it is safe to do so. They make great pets for highly-active, high-energy, sporty type families. Although they prefer cool climates, they can adapt well to others and can live outdoors but would much rather be with their family.

These dogs are high energy, extremely intelligent dogs that need proper leadership, to be challenged, and lots of daily exercise. For these reasons they are best suited to an experienced dog owner - and are definitely not for first time dog owners. They can be very demanding and if the owner does not know how to handle them they can become very difficult to control.

Although they have a strong working-dog background, they crave companionship and family time above everything else. It is very important that they be a part of the family, if they feel neglected, they will entertain themselves by, for example, digging holes in your mattress.

They are wary of strangers and incredibly alert, they will notice sights, sounds, and smells that you don't - this makes them excellent watchdogs. They also make good guard dogs as they are naturally protective of their owners, however, they are not excessively aggressive.

Belgian Malinois exhibit energy levels that are among the highest of all dog breeds. They can be excessively exuberant or playful, especially when young, but most calm down a bit between the age of 3 and 5 years

Because of their high energy they need a lot of daily exercise, a normal walk around the block will not be enough - you will have to take them hiking, running or biking. They also have a high play drive and love to run and play in a large open area and games like fetch will keep them busy for as long as you are willing to throw. Other ways of exercising them both physically as well as mentally is by taking part in sporting events like agility, flyball, obedience, frisbee, herding, sledding, rally, and tracking. If they don’t get the exercise and stimulation they need they can become destructive or develop neurotic behaviours.

These dogs will not be happy unless they gets lots of daily exercise and stimulation. They also thrive when they have a job to do, it doesn't matter so much what their job is, as long as they have one. For this reason along with their intelligence and trainability they are often used as police dogs, military dogs, and homeland security dogs.

Socialization is very important with this breed, you need to start while they are still puppies. It will help the dog to be more confident and not overly suspicious, shy or sensitive.

In a nutshell, a Belgian Malinois is for you if you:

Please read our articles on how to choose a reputable breeder on the Puppies page.
Which other breeds are most compatible with the Malinois?

If raised and socializes with other dogs they can get along well with most of them, however they tend to be on the bossy side and can be rather dominant toward other dogs.

It will be best to get another dog that is not challenging or dominant themselves – dogs such as  Pitbull, Staffie, Bull terrier, German Shepherd, etc. should be avoided.

Your best match is one of each sex i.e. male and female or else two males. These dogs need firm handling, although the methods used should always be those of positive reinforcement. Extensive socialization for this breed is a must.

Please read ‘Placing Littermates in the same home’ and ‘Double Trouble – (why you shouldn’t get two puppies)’ on our website for more information.

To keep two or more same-sex dogs of a rather dominant breed together, is often a recipe for conflict. They can get along fine, until they are ‘triggered’ by a ball or a bone lying on the lawn, when both might want to take possession of it, or by someone delivering mail and when they rush for the gate and can’t get to the ‘intruder’, they go for one another.  As mentioned previously, a knowledgeable, experienced and firm owner is required.

The Malinois are not typically an aggressive breed but because of their protective side they can be aggressive towards dogs or other animals they doesn’t know.

However they get along well with other dogs they were raised with, even cats (as long as they don’t run away) and if properly socialized, they can get along well with strange dogs too. But take care with small non-canine pets like rabbits, rats and even with some cats. Because of their high prey drive chances are they will chase and kill them.

Early and continued socialization is a must.

If socializes well and/or raised around children, Malinois can be very good and accepting of them. However, young children need to be taught not to run past the dog waving their arms and shrieking, as this may trigger their prey drive and they will chase the children. Also, keep in mind that Malinois are tremendously physical animals and might run into a child accidentally... over and over again. They are best suited to a family with older children who understand how to treat them with respect and should always be supervise with smaller children.  They are prone to herding behaviour.

They can be slightly reserved with new people, but tend to relax when they realizes there is no threat to the household. However because of their herding instincts they may try to herd children, visitors, other pets, etc. This includes them nipping and chasing.

The Belgian Malinois is very intelligent and easy to train, they learn new commands very fast and have a high drive for rewards. Start training when they are still puppies and don’t use harsh training methods. They need an owner who is firm, confident and not heavy handed, you need to set clear consistent rules.

Because of their instinctive display of herding behaviour such as chasing, circling, and nipping at people's heels they require consistent obedience training. Teach them to “Come,” “Down-Stay,” or “Leave It”.

The smooth, shorthaired coat of the Malinois is easy to groom. They need only a weekly brush to remove dead hair but they do sheds heavily twice a year and will need more frequent brushing during that time to control the amount of loose hair floating around. Don’t bathe them too often, soap can remove the natural oils and waterproofing - bathe him only when absolutely necessary.

This is a relatively healthy breed, some of the health issues they can develop are skin allergies, eye problems (like progressive retinal atrophy or cataracts), hip and elbow dysplasia, thyroid disease, epilepsy and obesity.