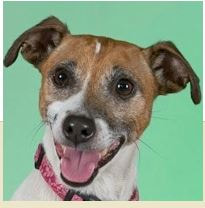 about adopting first and foremost. If the rescue centre above is not in your area, just do a search for one closer to you. https://jackrussell.rescueme.org/za
The Jack Russell Terrier originated in Devonshire in the south of England in the late 1800's. They were used for fox hunting and are named after the Reverend Jack (or John) Russell, he had a passion for fox hunting as well as the breeding of fox hunting dogs. While studying for a ministry at Oxford University he saw a little Terrier type dog riding on a horse-drawn milk cart and impulsively bought her. The dog's name was Trump and by mating Trump with small Fox Terrier-type dogs, she became the mother of the Jack Russell Breed. At this time, the dogs were called “fox terriers”, he term “Jack Russell Terrier” was coined after Rev. Russell’s death in order to distinguish the small working dogs from the existing “fox terriers,” which were larger.

These little dogs have compact bodies, dark eyes and a dense double coat that is either smooth, rough or a combination of both which is known as a broken coat. A broken-coated dog may have longer hair on the tail or face than that which is seen on a smooth-coated dog. The coat colours should be predominate white with tan, black or brown markings.

The energetic and spirited Jack packs a lot of personality into a small body. A good word to use is feisty - they are intelligent, affectionate, obedient and cheerful, but can be alarmingly assertive and independent. They are loving, devoted, and endlessly amusing, enjoying life and all it has to offer.

Despite their small size, these dogs are not recommended for apartment living unless the owner is willing to providing the dog with the necessary amount of exercise and stimulation. They have a lot of energy and will do best with at least an average-sized yard - make sure that they can’t climb, dig under or jump the fence. They are very good at escaping and can easily clear a 5 foot wall to chase a running cat. They are often thought of as a good dog to have in a town house complex – which is definitely not suited to them.

They love and need a lot of attention and are very devoted to their families. They need to be part of the family and included in activities and outings, they do not do well when left alone for extended periods of time. Because they can be protective of their families and environments they make great guard dogs, they are also good watchdogs - they will announce a stranger approaching the house with relentless barking.

These little dogs are intelligent and will amuse you for hours on end but they can also be very strong willed. If you give them an inch, they can become determined to take a mile. They are not for inexperienced/first-time dog owner, they need an owner who is strong-willed that can set rules to follow, and limitations as to what they are and are not allowed to do. If they do not get these rules and limitations they are prone to developing Small Dog Syndrome, this is where the dog believes that they are boss and is due to the fact that the owner is too lenient with them and lets them get away with more that they should. This can lead to behavioural problems such as guarding, snapping, separation anxiety, and obsessive barking.

Like with any dog Jack Russells need early socialization when they're young, this allows them to grow into well-rounded adults and prevents aggression toward other dogs.

This breed needs a lot of exercise and stimulation, a half an hour to hour walk twice a day will get rid of a lot of their energy but they also need plenty of off-leash play. They love to run and make excellent jogging companions, they also enjoy games and playing with toys and will play fetch with you as long as you are willing to throw. Because of their strong prey drive they will take off after smaller animals. For this reason it is important not to let them of leash in areas that it is not save to do so.

If they don’t receive enough exercise and activity to occupy their keen minds they can become restless and destructive. They bore easily and will often create their own fun when left alone to entertain themselves.

Their high energy and drive make these dogs ideally suited to a number of different activities such as flyball, agility, hunting, surfing, bird retrieval, skate boarding, search & rescue, tracking and performing tricks. Some Jack Russell Clubs today arrange tunneling competitions where the dogs must burrow their way through the tunnel. Dog races are also popular, with the dogs chasing a mechanical lure.

Because of their breeding they love to chase anything and explore. They are very vocal dogs and, like many terriers, enjoy digging and can make quite a large hole in a short time.

In a nutshell, the Jack Russell Terrier is for you if you:

Only from reputable breeders! One can contact the Kennel Union Of South Africa (KUSA). They have a list of breeders who have puppies available or else a KUSA affiliated breed club.

Which other breeds are most compatible with the Jack Russell Terrier?

These dogs will get along with most other dogs as long as they have been socialized properly from a young age but do avoid any other Terrier breeds.

The best option is a dog that is not very dominating or challenging;  not breeds such as  Pitbull or Staffie; as a JR will not back down from a challenge.

Good breeds to go for will be one that is hardy and playful with a high-energy temperament; like another Jack, Boxer, Labrador, etc.

Most definitely, this is the most ideal situation as they understand each other. Preferably have a male and female. Always have only one male unless you have a lot of experience handling dogs.

To keep two or more same-sex dogs of a rather dominant breed together, is often a recipe for conflict. They can get along fine, until they are ‘triggered’ by a ball or a bone lying on the lawn, when both might want to take possession of it, or by someone delivering mail and when they rush for the gate and can’t get to the ‘intruder’, they go for one another.

Aggression toward other dogs can be a serious problem with these dogs; however it they are properly socialized from a young age they can get along very well with other dogs and even cats (as long as they don’t run from the dog).

But because of their strong prey drive and will take off after smaller pets such as rabbits, birds, rats etc. They must never be left unattended with these pets and early socialization is a necessity.

Jacks are friendly and generally kind to children; however they are not recommended for younger children at they can be a bit rough with them and they will not tolerate abuse even if it is unintentional - they will snap. They do well in homes with older children who understand how to interact with dogs.

The Jack Russell is very intelligent and highly trainable, but they have a mind of their own and can be quite strong willed - they are thus not the easiest to train. They need an experienced trainer who is patient, firm and consistent with their training.

Training sessions should be short and sweet to hold his interest, repetition bores him. And although they respond to positive motivation in the form of praise, play, and food rewards, they'll become stubborn in the face of harsh corrections.

These dogs have coarse double coats that comes in three types: smooth (short), rough (long) and broken (short and long)

All three coat types need only weekly brushing; but because they sheds you can brushing them more often to remove dead and loose hair. They only need to bathe when necessary.

As you groom, check for sores, rashes, or signs of infection such as redness, tenderness, or inflammation on the skin, in the ears, nose, mouth, and eyes, and on the feet. Ears should smell good, without too much wax or gunk inside, and eyes should be clear, with no redness or discharge. You also need to clean their teeth about once a week. Your careful weekly exam will help you spot potential health problems early.

This is a solid breed with relatively few health issues