Life Expectancy of Dogs: How Long Will My Dog Live?


Kimberly Alt
www.caninejournal.com
​(A really great website - do visit, more than worth the time)

What Determines a Dog’s Lifespan?

Want to know how you can help your pup live a longer, happier life? Below are some factors that help determine a canine’s lifespan.

A dog with a proper, nutritious diet and exercise can live longer than one without. In addition, taking your furry friend to annual wellness exams at the veterinarian and getting its booster shots can result in a healthy dog with a longer lifespan.

Research shows that larger dogs live for a shorter period of time when compared to smaller ones. For example, an Irish Wolfhound (average 115 lbs) has an average lifespan of 7 years, while a Jack Russell Terrier (average 15 lbs) can live up to 13-16 years.

Inbreeding can reduce the lifespan of canines. Cross breed dogs have a longer lifespan in comparison. Inbred dogs have a risk of carrying genes for illnesses that are common to that specific breed. Further, “mutts” who have at least two breeds and commonly more, tend to have the least health problems and live longer than their purebred counterparts.

Spaying and neutering a puppy at a young age can positively affect a dog’s lifespan. Studies suggest that these surgeries can help reduce the risk of some types of cancer in dogs. Especially cancers affecting the ovaries, breast and testicles. Recent studies show that these benefits may or may not completely accurate but there is no question that your life will be easier without a litter of puppies in your life and this will also be less stress on your pup, which could mean a longer life.
​Below is a dog life expectancy chart sorted by the most popular registered breeds from the past decade.  The top 25 are included from the AKC list from 2013. 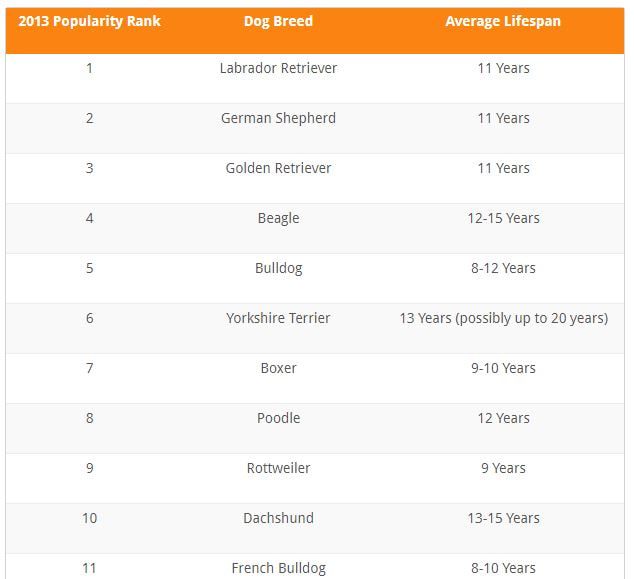 You’ll notice that most dogs in this chart are larger breeds. As mentioned above, larger dogs tend to have shorter lifespans than smaller ones. Some believe this is because large breeds age quicker. For example, a Great Dane can gain 100 pounds from its day of birth to its first birthday, whereas a Shih Tzu can weight up to 15 pounds in its entire lifespan. Below is a table of ten dogs with short lifespans. What Is the Longest Living Dog Breed?

Chihuahuas are normally referred to as the breed with the longest lifespan. They average 15-20 years and are one of the smallest dog breeds. The oldest Chihuahua on record2, Megabyte, died at the age of 20 years and 265 days.