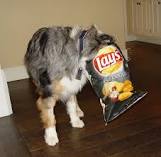 ​A grieving woman is speaking out about the tragic loss of her dog in hopes that it will prevent other pets from suffering the same fate.

In an emotional Facebook post, Christina Young from Texas, shared the heartbreaking story of how her dog, Petey Pablo, died after an unfortunate household accident claimed his life.

​On February 19, Young explains that her and her partner, Christian, both headed out to work as normal. But when she kissed her pet goodbye, she had no idea it would be for the last time.

Tragically, while the couple were out, Petey Pablo, found a packet of unopened crisps in the kitchen which became stuck on his snout and caused him to suffocate.
​
“Last Monday, Christian beat me home from work by about 10 min and was surprised when Petey didn’t greet him at the door like usual,” Young wrote.

“As he walked in further he saw our sweet boy laying lifeless with a stupid chip bag over his head. He was able to get them off the counter that we will forever blame ourselves for leaving out.

“He ate every chip out but of course went back for crumbs. With there being nothing left inside every time he would go for more he would inhale making the bag tighter and tighter around his head ultimately resulting in suffocation.”