Scent Rolling: Why Do Dogs Like to Roll in Smelly Scents? 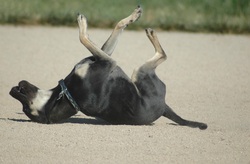 Have you ever wondered, after a long walk at the beach, why your otherwise perfect dog likes to roll in dead fish? And more importantly how you can discourage the behavior?

Virtually everyone who owns a dog is familiar with this smelly habit. Whether it's a bath in cow manure, a plunge into the nearest road kill, or a leisurely massage in a long gone fish at the beach, dogs wear foul scents the way people wear perfume. Do they just like the smell? Is it an olfactory disguise their ancestors used when hunting prey downwind?

While most dog aficionados, including myself, haven't a clue, when a reader posed this question to me, a number of years ago, I did what any good scientist would do. I looked to see if anyone had done any research on the topic. The answer lay closer to home than I thought, because it turns out, someone I actually knew had considered the same question, only it was in wolves, not domestic dogs. That person was Pat Goodmann, research associate and curator of Wolf Park in Indiana. Pat spent several years studying the phenomenon, called scent rolling, in the wolves at their semi-natural wolf reserve.

Why Do Wolves Scent Roll?"Scent rolling is probably a way for wolves to bring information back to the pack, " said Goodmann. "When a wolf encounters a novel odor, it first sniffs and then rolls in it, getting the scent on its body, especially around the face and neck. Upon its return, the pack greets it and during the greeting investigates the scent thoroughly. At Wolf Park, we've observed several instances where one or more pack members has then followed the scent directly back to its origin."

This scent smearing ritual isn't limited to stinky odors. In her studies, Goodmann placed different odors in the wolf enclosures and found that wolves roll in sweet-smelling scents too. Besides rolling in ode-to-cat, elk, mouse, and hog, they also rolled in mint extract, Chanel No. 5, Halt! dog repellant, fish sandwich with tartar sauce, fly repellent, and Old Spice. So the scents aren't necessarily foul, nor are they ones that wolves necessarily like. Goodmann stated, "some of the Wolf Park wolves object when handlers put fly repellent on their ear tips but these same wolves often scent roll readily in fly repellents manufactured to be sprayed onto horses, provided the scents are sprayed on the ground and left for the wolves to discover."

How to Prevent Dogs from Rolling in Foul Scents?While this foul form of fragrant communication may be fine for wolves, it's not so fun when it's Rover sharing the news. What can you do to discourage this odiferous behavior? According to Goodmann, it's a hard habit to break. Even if presented with an odor over and over, wolves continue to roll in it. The same goes for dogs.

Since your chance of finding a mint patch next to every dead fish is smaller than slim, the solution lies in your keen vision and ability as a trainer. Keep your eyes open for things that excite your dog's nose and before Rover's rolling in ecstasy call him back to your side. Then keep him engaged in fun games and rewards around you so that he forgets the potential stinky fun elsewhere. While the training time for a good recall makes this solution sound tedious, the time saved on needless baths makes the effort easily worthwhile.