Please visit and LIKE our Facebook Page and share with family, friends and on your own Facebook page, and ask them to share further – it is only by working together and sharing knowledge and education that we can improve the lives of dogs and assist owners. We do not inundate you with posts – an average of 5 per week, and the odd Did You Know. Thank You!
Head Cones Makes Dogs Miserable

https://www.sydney.edu.au - they also have a lot of interesting articles - do visit
​

Cats also wear the Elizabethan collar. Photo: Dr Anne Fawcett
Dog and cat owners already know their companion animals seem to loathe the ‘cone of shame’ they are required to wear after surgery or when they have a sore or itchy spot. But very little research has been done to assess the cone’s impact on animal welfare.

Now a new study by researchers in the Sydney School of Veterinary Science at the University of Sydney has found the cone, or the ‘Elizabethan collar’ as it’s known in vet circles, does indeed impact on an animal’s quality of life – owners, too.

The study, undertaken by Doctor of Veterinary Medicine student Yustina Shenoda and supervisors in the Sydney School of Veterinary Science, and published in the journal Animals, surveyed owners about the collar’s impact on their pet’s sleep, eating, drinking, exercise, interactions with other animals and overall quality of life.

Owners reported the collar interferes with drinking and playing and can cause injuries or irritation to the animal. It can also cause injuries to their owners and damage to property.

“Elizabethan collars are used to prevent self-trauma, especially after surgery, so they do play an important role,” said study supervisor Dr Anne Fawcett. “But we also learned that some animals suffer from misadventure, injury or irritation due to the collars themselves. Other casualties included furniture, buildings and the legs of owners when Elizabethan-collar wearing owners ran into them.”

A global online survey, aimed at owners whose pets wore an Elizabethan collar during the past 12 months, was used to investigate the impact that these collars had on their animal’s quality of life. Most of the respondents were from Australia, with others coming from the UK, USA, New Zealand, South Africa, Ireland and Sweden.

The majority of the 434 respondents reported a worse quality of life score when their companion animal was wearing the collar, significantly so when the Elizabethan collar irritated their pet or impacted on their ability to drink or play. Many owners were reluctant to keep the collar on due to changes in the animal’s behaviour or mental health.

Problems for cats and dogs wearing the collars include: “Our study found that Elizabethan collars had the potential to cause distress in animals, which in turn caused distress to owners,” Dr Fawcett said. “Some animals found ingenious ways to remove the collars themselves, for example running under furniture at speed, but damaged or poorly fitted Elizabethan collars could increase the risk of injury to animals.”

Owners have their say“ - My dog is a bulldog and his neck got very wet and inflamed from slobbering constantly with it on. He got very down with it on and seemed depressed. Maybe the shape of it was not good for him,” said one dog owner in the study.

“…in our case it was 22 inches of snow that made it impossible for him to move outside without have the snow fill the collar,” said a dog owner in Europe.

“Made the cat thoroughly miserable but he had licked himself a huge ulcer and the collar was the only way to get it healed. The collar interfered with virtually all aspects of his life, he hated it but fortunately was too stupid to figure-out how to get it off,” reported one cat owner.

“The Elizabethan collar was also aversive to me. My shins were so bruised from him banging into me causing less interactions with us,” a pet owner said.
“I have sustained a lot of damage to doors and plasterwork over the years as a result of the collars,” said the owner of a dog.

Owners should monitor their animals while they are wearing the cone.

The study recommends exploring alternative methods to Elizabethan collars to minimise negative welfare impacts including self-trauma, injury or misadventure, such as: “We also recommend that members of veterinary teams advise pet owners about the potential negative effects of the collar, including the potential for discomfort or injury,” said Yustina Shenoda. “At a minimum we recommend giving owners tips around assisting their animals with drinking and eating, and encouraging owners to monitor their pets when wearing them. This advice could be provided verbally or through a brochure that clients can take home.” 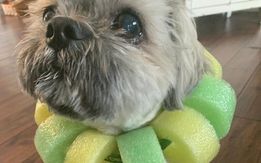 One of our readers sent us this fantastic idea - cone made out of pool noodled. thank you Tarryn!
​Note from FOTD

You can do some things to help your dog cope more if a cone is a necessity if  none of the alternatives are an option for you, here are some ideas:-