Please visit and LIKE our Facebook Page and share with family, friends and on your own Facebook page, and ask them to share further – it is only by working together and sharing knowledge and education that we can improve the lives of dogs and assist owners. We do not inundate you with posts – an average of 5 per week, and the odd Did You Know. Thank You!
Why Does A Dog Have A Moist Nose

www.vcahospitals.com - gives a list of VCA hospitals in USA and has some great articles 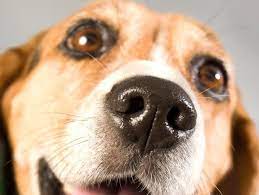 Dog owners generally agree that a dog’s cool, moist nose is a sign of good health, but exactly why is that canine nose wet in the first place?

The sense of smell is important to a dog, so noses are held in high regard in the canine community. Unlike humans who depend primarily on vision to survive in the world, dogs use both sight and smell to assess their surroundings and to communicate. The sense of sight is of utmost importance in humans, so human brains spend more time interpreting visual data than olfactory information. Dog brains are just the opposite, focusing on what the dog smells more than what he sees. The bottom line is a working nose is essential to canine survival - and wet noses work better than dry noses.

Dogs have more than 100 million sensory receptor sites in the nasal cavity, compared to 6 million in people. Moreover, the area of the canine brain devoted to analyzing odors is about 40 times larger than the comparable part of the human brain. In fact, it’s been estimated that dogs can smell anywhere from 1,000 to 10,000 times better than people, partly due to the presence of an additional olfactory tool called Jacobsen’s organ that increases their ability to smell. Jacobsen’s organ is located inside the nasal cavity and opens into the roof of the mouth behind the upper incisors. This amazing organ serves as a secondary olfactory system designed specifically for chemical communication.

Wet noses have another advantage. They help keep a dog cool. Dogs dissipate some heat through their foot pads and by panting, but utilize the nasal passages as a cooling mechanism, too

The inner lining of the dog’s nose contains special glands that produce mucus to keep the nasal canals moist. A thin layer of mucus clings to the nostrils, enhancing the absorption of scent chemicals and improving the dog’s ability to smell. The special mucous glands inside the nostrils also produce clear, watery fluid that aids the cooling process through evaporation. 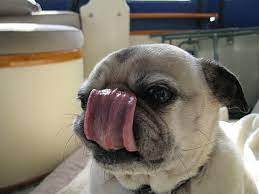 2. Dogs lick their noses
​
It seems like some dogs are constantly licking their noses and they are quite good at keeping them covered in saliva. Dogs have long tongues that can easily reach the tip of the nose, even in breeds like Collies that have really long noses. Why do they lick their noses? Dogs lick their noses to keep them clean, since canine noses get dirty a lot as dogs smell everything. Whether it’s food from the bowl or pollen from a flower or dust under the couch, doggie noses stay dirty and need lots of licking to get clean again. Dogs also lick their noses to gather some of the scent particles inside the mouth. The mucus from the nose, laden with scent particles, is carried to the roof of the mouth where Jacobsen’s organ is located. Licking the nose enhances the sense of smell by facilitating the function of Jacobsen’s organ. Moisture is so important to the canine sense of smell that dogs learn to keep them moist and will automatically lick their noses when they become dry. Smart dogs don’t want to miss out on important information due to a dry nose!

3. Noses get wet at work

The canine nose works hard. Dogs use their sense of smell, along with sight, to navigate the world – so they sniff a lot of stuff. Dogs probe with their noses when investigating something new, sticking them into damp grass, leaves, plants, puddles, etc., and they come out with wet noses after they pick up moisture from the environment.

A wet nose is normal, but a dry nose isn’t necessarily abnormal. Many people think that a healthy dog has a cool wet nose and a sick pup has a warm, dry one. That’s not always true. The actual temperature and moistness of a nose is not a good indicator of overall health status. Some healthy dogs just have naturally dryer noses than others. Likewise, sick dogs can have cool, wet noses.
A healthy dog may have a warm, dry nose after a nap, or after extreme physical exertion associated with dehydration. Some dogs develop a chapped, dry nose as they age or after exposure to the elements (extreme wind or sun). So dry noses aren’t always a sign of trouble.
The temperature of a dog’s nose is not an accurate measurement of overall body temperature, so if your dog’s nose is hot and dry but he’s acting normally, there is no cause for alarm. If a dry nose accompanies other signs of illness, such as listlessness or loss of appetite, you should consult your dog’s doctor. Also, if the skin around the nose becomes red or if the nose becomes cracked or develops sores, consult the veterinarian.

What does an overly wet nose mean?

Dry noses can indicate trouble, but so can overly wet ones. Clear nasal discharge is normal but if you notice an overabundance of mucus or if the mucus becomes thick or discolored, call your veterinarian. Nasal discharge can indicate respiratory infections or even foreign bodies in the nasal passages.
​
Noses vary in size and shape in the canine world, but regardless of what they look like, they are important to survival. So pay attention to your dog’s nose to help him stay healthy. And enjoy those warm moist snuggles your dog’s nose provides you.