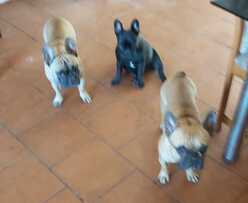 Pic from Ladoogle French Bulldogs. https://www.facebook.com/ladooglebulldogs/photos/a.693039020857894/1782968718531580/
The French Bulldog originated in 19th Century Nottingham, England, where lace makers decided to make a smaller, miniature, lap version of the English Bulldog, these dogs were referred to as a "toy" bulldog. In the 1860s, when the Industrial Revolution drove the craftsmen to France, they took their dogs with them. There - although records were not kept of the breed's development - it is believed that these “toy” bulldogs were bred with Terriers and Pugs to develop traits such as the breed's long straight ears, and the roundness of their eyes. Although these dogs originated in England they became so popular in France that they were given the name "French Bulldog."

The French Bulldog are small with sturdy, compact, stocky bodies, “bat-like” ears, round prominent dark eyes and short thick tails. The skin is loose, forming wrinkles around the head and shoulders. Their coat is fine, short and smooth and comes in combinations of brindle, fawn, tan and white.

These little dogs are intelligent, affectionate, easygoing, loving, caring, alert and playful. They have very outgoing, curious, comical personality with a bit of a mischievous side - they love to clown around.

Frenchies are good for apartment life, they can be fairly active indoors and will do okay without a yard. In fact they are indoor dogs, because of their bulk and compromised breathing system they struggle to regulate their body temperature efficiently - so they can easily overheat in hot weather.

These little dogs have fairly minimal exercise needs, but do require at least daily walks. They also love to run and play and can play for hours if you let them. Generally they have short bursts of high energy, but these are interspersed with long periods of napping and lounging around. Be careful not to over exercise them, especially if it is hot out to prevent heatstroke.

They can be territorial and protective, and will sometimes alert their owners to danger, but not all the time -for this reason they don’t make great watchdogs, or guard dogs for that matter. Some never bark at intruders, rather they are typically a quite breed that does not bark excessively. When they do bark it's often to draw attention, to point out that they needs something or just because they are not happy.

Like a lot of small breeds the French Bulldog is prone to developing Small Dog Syndrome, this is where the dog believes that they are boss and is due to the fact that the owner is too lenient with them and lets them get away with more than they should because they are so small and cute. This can lead to the dog becoming demanding, headstrong, protective, aggressive towards other dogs, suspicious of strangers and bark excessively. To prevent this you need to give this dog rules, and limits to what they are and are not allowed to do; be firm and consistent.

They are particularly affectionate toward their owners, and can even be a bit possessive.  They need to be a part of the family and will want to be in close contact with you. They love nothing more than to cuddle on the couch, romp on the carpet or play in the yard - their favourite pastime is to act as a lap-warmer and you will need to be willing to share your favourite chair. Do not leave them alone in the house for too long, they are people-oriented dogs that crave attention and interaction and if they do not get it they can develop behavioural problems.

They are happy-natured dogs that rarely lose their cool, snap or bark. These loyal little guys are the ideal housedog; they are clean (most will try to avoid puddles), compact and quite. However, they often snort when excited, drool and slobber quite a bit, are frequently gassy (have flatulence), and snore loudly. In addition, they are top heavy and therefore have difficulty in swimming

In a nutshell, a French Bulldog is for you if you:

Only from reputable breeders! One can contact the Kennel Union Of South Africa (KUSA). They have a list of breeders who have puppies available and also from KUSA affiliated breed clubs

Which other breeds are most compatible with the French Bulldog?

They will get along with most other breeds of dog, just keep in mind that they are small dogs and can get huts by larger breed dogs.

A good choice of breed would naturally be another French Bulldog, Boxer, Greyhound, Labrador (although they can be very boisterous when young and may play a bit rough, but they do calm down as they get older), Bulldog, etc.

Herding dogs (collies, Australian shepherds, etc) might not be the best choice as they tend to try and "herd" and nip at a running French Bulldog.

Dogs like Pit Bulls or Staffies can get irritated by the French Bulldog’s clownish nature and this can lead to disaster.

They are excellent with children, if they get irritated they will rather get up and walk away than bite. But because of their size they are recommended for older children who have learnt to treat them gently, as younger children can get a bit rough and get  hurt them by accident. They, like any other breed, should never be left unsupervised with small children.

These dogs are trainable but they are harder to train and learn new commands slower than most other breeds. They can be stubborn, and will do best when they are convinced that they are interested in the task at hand. You need a lot of patience and a firm, consistent, calm hand to train them.

Harsh training techniques or physical punishment will get you nowhere except damage your relationship with the dog. They best way is to use positive reinforcement techniques along with their favourite reward - be it a toy or a treat.

This breed is one of the easiest breeds to groom, their short coat only requires brushing about once a week, you can also rub them down with a damp cloth to keep their coats shiny. But during change of season they will shed a bit more and will need more frequent brushing to remove loose hair. Bath them only when necessary, as this removes the natural oils and can dry out their skin. The skin folds under their eyes should be cleaned regularly and kept dry to prevent infection.

French Bulldogs have a few health issues that they are prone to, including:


“In today’s age, with the rising cost of veterinary care, it really is a wise decision to consider medical insurance for your pets. Depending on the plan you choose, you can ensure that if your pet does develop one of the health issues the breed is prone too, that you will be covered –additionally, just knowing that any accident your pet may have will be covered, will out-weigh the monthly insurance fee for most pet owners. Our own personal choice is Genricpet as they have a ‘no limit’ policy and their rates are comparable to the rest of the industry. To find out the questions and things to look for in a Medical Insurance, please just follow this link”
​ 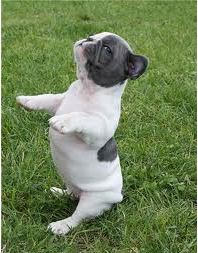