Fear - When Your Dog is a Scardey-cat 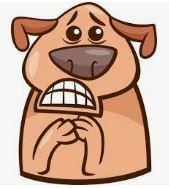 When your dog is a scaredy-cat

Can you imagine living in a human world as a different species, and unable to communicate your fears and insecurities? Our dogs are confronted to a myriad of ‘human’ things in their lives. These are things that they simply don’t understand, and as a result many dogs suffer from fear in one form or another.

Fear behaviour manifests in a variety of ways. Your dog might be scared of something in the household, like the vacuum cleaner; your dog might fear a specific type of person (children, men, etc); we are all familiar with how scared dogs can get of thunderstorms and fireworks. In some cases, often when there is a history of abuse or a total lack of socialisation/habituation, dogs can become nervous wrecks, experiencing most aspects of life as terrifying. What a sad way to live! Most dog owners are aware of the fact that their dogs need attention, healthy food, medical care and shelter. But it’s about time that we start thinking about their emotional needs as well. Fear is serious, and just by being aware of our dog’s fears and respectful of it we can greatly improve their wellbeing.

The fear is REAL

This is something humans tend to battle with. Why? Because dogs sometimes get scared of things that appear completely harmless to us. Their fears are often not logical. For example, when my Chihuahua Benji went through adolescence, he developed a fear of the books on my bedside table. It doesn’t get more irrational than this! But I know this because as a human, I have the ability to reason. The dog does not. And for him, those books were every bit as scary as it is for me to well, go to the dentist. This is something we really need to understand. Even when the dog is scared of something that makes no sense, he is still really, very scared, and to your dog, this is serious. Take a second and think about something that scares you a lot. Imagine being face to face with your biggest fear. Your heart beats a little faster, your hands get sweaty and you are filled with a feeling of dread. It’s not pleasant for us, and neither is it for our dogs.

Something I often see is that a dog’s owner will present the dog with whatever is scaring him, in order to ‘show the dog that it’s not so bad’. All this achieves is scaring the dog even more! Once again, consider that thing that you are afraid of. Will shoving it in your face cure your fear? Absolutely not, you will be left terrified, and you will be very annoyed at the person who was insensitive enough to give you such a fright. You are supposed to be the one your dog trusts, his safe place, and certainly not part of the reason why he is scared. Therefore, it is vital not to purposely expose your dog to things that he finds scary. He will not get over it, the fear will get worse. Working with a behaviourist will give you the opportunity to learn the correct way to help a dog cope with fear.

Fear is not funny

Social media may have its perks, but we should be using it responsibly. Funny animal videos are one of the most popular things on the internet and with good reason, as our animal friends can get up to some strange things! But, many of these ‘funny’ videos actually show a dog in distress, and we laugh at it because we don’t know better. The majority of these videos show a dog that throws out signs that he is not comfortable. Body language such as lip licking, yawning, turning the head away or the whites of the eyes showing excessively are all the dog’s way of saying: “please back off, I’m really not comfortable!” We should not be sharing this type of videos. And some might think that I am being a bit of a drama queen here. But, by sharing and laughing this type of video, we are creating a society that simply doesn’t care about our dogs’ emotions. We are creating a society that laughs at a dog’s discomfort, instead of educating ourselves about what is really going on in that ‘funny’ dog’s mind. Is it really asking too much to show just a little bit of compassion and humanity? 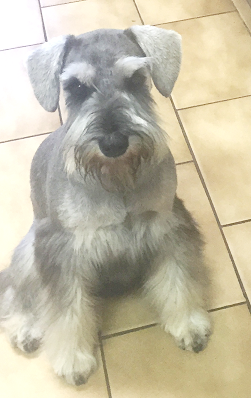 Recently my path crossed that of Emily, a gorgeous miniature Schnauzer who lives with her human family and three other mini Schnauzers. Emily has a sad background, as she was adopted from a puppy mill, where a large number of dogs were kept in horrific circumstances, and being used for breeding litter upon litter. These dogs weren’t used to human contact, and many of them were so fearful that it was impossible to approach them.

After her adoption Emily improved drastically, thanks to her human mom who was dedicated to helping her. However, a fear of humans remained. Upon my arrival at their home Emily would bark anxiously, and while the other Schnauzers would happily greet me, Emily always kept her distance, with a suspicious look in her eyes. Then, about seven weeks later, the most amazing thing happened. I called Emily to me, she came to me, and she allowed me to scratch her back. This was such an emotional moment, because I realised that Emily had come to a point where she trusted me enough to let me touch her, which is massive progress for her as this simply hasn’t happened before with other people.
​
How did I win Emily’s trust? Among a few other things, the answer lies in acknowledging and respecting her fear. And this is not nearly as complicated as it sounds – it was simply a case of allowing her the space she needed. Not once did I try to approach Emily or try to touch her. I let her take her time – and it worked. This is true for all dogs, even those who are not fearful of humans. Can you imagine what it must feel like to have humans constantly trying to touch you or cuddle you? Especially if it’s strangers! Ignoring a dog gives that dog enough space to decide when they are comfortable to interact with you. In confident, well-socialised dogs, they might immediately approach you for some love. In Emily’s case it took more than a month. Some dogs might take longer. And that is okay. Because making a dog feel safe is how we build trust, and as a result, a lasting relationship.