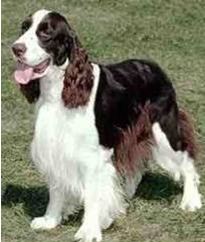 Spaniel-type dogs are thought to have originated in Spain — hence their name — many centuries ago and were probably taken to other parts of the world by the Romans or via trading ships. Before guns were invented, the spaniel was used to flush gamebirds or small animals by springing at them and driving them into the open so they could be captured by hunting hawks, coursing hounds, or nets flung over them. When firearms were invented in the 17th century, spaniels proved to be especially adept at flushing game for shooters.

During the mid-19th century dogs of the same litter were classified by their hunting use rather than their breed. Smaller pups in the litter would be used to hunt woodcock, and therefore were called Cockers. Larger pups in the same litter would be used to flush game and were called Springers. Breeders then started breeding the smaller dogs only with each other and the same with the larger dogs which lead to the development of two separate breeds - the Cocker Spaniel and the Springer spaniel.

The English Springer Spaniel is a medium sized compact dog. Its coat is moderately long with feathering on the legs and tail. It is a well proportioned, balanced dog with a gentle expression and a friendly wagging tail. Their talents include hunting, tracking, retrieving, watchdog, agility, competitive obedience and performing tricks.

The breed has diverged into separate show and working lines. Field trial enthusiasts began breeding dogs with qualities such as a keen sense of smell, speed, style, working ability and endurance that would produce top results in the field; where show enthusiasts began to breed dogs that were both consistent with the breed's standard, and had the "flash" to win in the show ring. Today the two types are not interbred and though both types have the instinct to work and can be trained to the gun, there are very few that can work in both field and show events. A field-bred dog would not be competitive in a modern dog show while a show dog would not have the speed or stamina to succeed in a field trial

These dogs are affectionate, easy-going, excitable, gentle, friendly, eager to please, quick to learn, and willing to obey. They are also very alert, attentive, intelligent, skilful and social dogs with a very playful and sincere nature. They are also recognized for their ability to keep going and going under adverse hunting conditions

This breed is relatively inactive indoors but they do need exercise and will do best with at least an average-sized yard. They can adapt to apartment living if they are sufficiently exercised.

Springers are good pets for first time dog owners but like all dogs they need early socialization and at least basic training, so they can become well rounder pets.

They also need a fair amount of exercise. If you have a fenced yard or acreage Springers love to run around on their own, however, one or two daily half an hour to an hour walks are recommended. Because of their hunting instincts it is a good idea to keep them on leash when walking in unfenced areas to prevent them from hunting on their own.

They also love to swim, and if you have a pool or access to a lake, it's a great way for them to get exercise.

Another way to exercise them physically as well as mentally is to participate in activities such as obedience, agility, flyball, and tracking. If they don’t get adequate exercise they can become nervous and destructive.

This breed is very people-oriented, and shouldn't be left home alone or isolated from people for long periods to time, they can become destructive and mischievous through boredom.

English Springer Spaniels will bark if strangers come to your house, but if you're looking for a guard dog, keep looking. They are loving, gentle dogs who expect even strangers to give them attention.

In a nutshell a Springer Spaniel is for you if you:

Before you get a Springer you need to know what type of pet you want. As stated before there are two distinct types - the field and show types - and there are differences between them.

Both types need lots of exercise, but the field Springers need more than the show Springers.

So if you want a companion dog purely for the purpose of having a pet, or you want to compete in shows the show-bred type will be best for you.

But if you are a very active family and need a dog with lots of energy to keep up or you want to use the dog as a working dog a field-bred type will be best for you.

As with all dogs the best place to get pups is from reputable breeders! Speak to the breeders and explain to them what you want out of your dog and they will be able to help you choose the correct pup for your needs.

One can contact the Kennel Union Of South Africa (KUSA). They have a list of breeders who have puppies available or contact a KUSA affiliated breed club.

Which other breeds are most compatible with the Springer Spaniel?

Springers are great with most dogs, they can be very playful so it is a good idea to get a dog that is similar in size so they won't get hurt while playing.

A good choice would be a breed with approximately the same energy level and temperament.  Naturally another Springer is a good choice or any spaniel for that matter, for other breeds you can look at Labradors, Golden Retrievers, Pointers, Greyhounds, Boxers, Setter and herding dogs like Border Collies and Australian Shepherds also work well.

To keep two or more same-sex dogs of a rather dominant breed together, is often a recipe for conflict. They can get along fine, until they are ‘triggered’ by a ball or a bone lying on the lawn, when both might want to take possession of it, or by someone delivering mail and when they rush for the gate and can’t get to the ‘intruder’, they go for one another.  Additionally, as the pup reaches the adolescent stage, its own position in the canine pack will assume much importance. This can lead to fighting between dogs and especially in the case of two females. The fights can be very serious and may not be able to be solved.

They are a sociable breed that handles the company of other pets well, even small ones, but they might see pet birds as prey since those are what they're bred to hunt.

Keep in mind that, like with all dogs, the level at which these dogs (even though they are a sociable breed) get along with other animals depends greatly of how well they were socialized as pups.

Because of their affectionate nature, they aren't a one-person dog, they are very people-oriented and love spending time with their family. They enjoy the company of children and make great child companions if they were brought up with children.

Older Springers who are unfamiliar with children may do best in a home with children who are mature enough to interact with them appropriately.

Springers are very bright and eager to please, this makes them very easy to train. They love structured learning and are very adept in obedience and agility work. They should however be taught with gentle persistent and patience.

The time required to house train them will vary depending on each dog and on the method used. They tend to get the idea pretty quickly if positive methods and consistency in training are used with this breed. Crate training seems to be of great assistance for most dogs in house breaking

English Springer Spaniels have a double coat, which means that they shed moderately all year long. Brushing your Springer at least three times a week to avoid mats, or tangles, this will also help keep loose hair off your clothes and furniture.

You can also want to trim around the head, neck, ears, tail, and feet, to give them a neater appearance. This can also be done by a professional groomer every two to three months.

Other grooming requirements is to check and clean their ears weekly, because of their floppy ears the air circulation is blocked and this can cause infection; brush their teeth at least two or three times a week to remove tartar buildup and trim their nails regularly if they dont wear them down naturally.

Springers are generally healthy, but like all breeds, they're prone to certain health conditions.

They are prone to epilepsy; ear infections; hip/elbow dysplasia - a malformation of the hip joints that leads to arthritis; progressive retinal atrophy (PRA) and retinal dysplasia (RD)  - both of which can lead to blindness; Phosphofructokinase deficiency (PFK) - which is genetic deficiency that impairs the ability of cells to use carbohydrates for energy; autoimmune diseases - which include allergies and other sensitivities to the environment; and various eye problems including inward or outward curling eyelashes or even an additional row of eyelashes, all of which can require corrective surgery. They also tend to gain weight easily, and owners need to be careful about their food consumption

There life expectancy is about 12-14 years.