Another great article by the late Dr. Sophia Yin 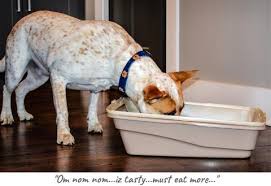 Q) We have a Boxer and a Lab. Both are 5 years old. They get into the cat litter and we can’t seem to break them of this habit. We have a covered box for the cats and keep the opening facing the wall but cannot keep them from actually turning the box and eating the poo. Definitely yucky! Do you have any suggestions?

Yuck is right, because immediately after sampling this savory snack, dogs tend to engage in their other canine-specialty: the big wet kiss. Unfortunately, you don’t know the affectionate gesture’s laced with a slimy stink until it’s too late.
​
Why do dogs don this eclectic assortment of culinary cravings? The answer lies in studies of free-roaming, human-avoiding dogs in rural areas of other countries. These dogs don’t survive by playing the great four-legged hunter. Instead, they raid the Mother Lode of trash cans: the local dump. And with all the competition amongst rival groups, they can’t be choosy. If it smells edible, the rule is “eat first and ask questions later.”

But why do your refined city dogs engage in scavenging like these rural heathen hounds? And why your cat’s poop? Because they can and because it’s there. Some owners are lucky because their dogs haven’t figured it out. Once they do, it’s “end of story.” Dogs practically lie in wait for a chance at this secret stash. Will kitty leave them a tasty treat this time? Once the prize is placed, it stares them in the eye like a luscious brownie on the third day of your no-chocolate diet.

Needless to say, trying to break Fido of this habit is a losing cause. And scooping the litter box immediately after each of Kitty’s deposits is simply not possible for mere mortals. Luckily, we can manipulate the environment to restrict dogs’ access and get our way. For example, if your Fido is Fifi-sized, you can elevate the litter box out of pooch range. On top of a desk or cabinet could work fine. Of course, you have to be sure Kitty is comfortable jumping that high.

For large breed dogs, you can designate a room for Kitty’s litter boxes and place a baby gate in the doorway, but raise it about a foot off of the ground. A better bet in your case would be a personal passage for your cats to their private lavatory in a separate room or closet. You can either try a magnetic or electronic kitty door that will only open for pets wearing the collar key. Or you can try my personal favorite: the “Cathole,” a mouse-hole shaped entryway that you insert into a door. It’s big enough for both regular as well as plus-sized cats but keeps most dogs—and infants for that matter—out. Even with the enticement of last night’s table scraps, neither my 35 pound Australian Cattle Dog nor my 20 pound Scottie—who due to some weird act of nature has the same sized head and teeth but a smaller body than the cattle dog—could shove her way through past her chest. They just paddled and strained, their heads protruding through like mounted trophies.

The Cathole even looks pretty nice. It has an optional brush insert which grooms your cat every time she passes through, and you can stain the wood to match or complement your door’s design.
The one down side is that you do need to install it. Yes, unfortunately it’s not self-installing. That means you have to take the door off its hinges and cut a hole using a jigsaw and the included template. Luckily, the Cathole comes with instructions designed to guide even the most mechanically handicapped. The company’s web page includes pictures on how to remove your door, and the paper instructions remind you to make the hole at the bottom of the door rather than accidentally making it at the top. All-in-all, the process is pretty simple and probably worth your while. The best part is that if you place the litter box far enough away from the hole and in a location that your cat finds suitable, your pooch poop-eating problem could be solved for good.
You can find different door options at www.petdoors.com.
​
Adapted from an article originally appearing in the San Francisco Chronicle in 2001.