Dogs Have Feelings, Too 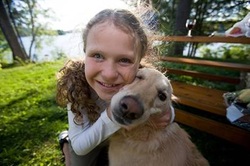 Researchers at the University of Vienna, Austria, suggest that dogs have a sense of fairness and jealousy.

The team found that dogs would stop doing a simple task when not rewarded if another dog, which continues to be rewarded, is present “” demonstrating a sensitivity in dogs that was only previously found in primates.

"Animals react to inequity," said Dr. Friederike Range, who lead a team of researchers testing animals at the school’s Clever Dog Lab. "To avoid stress, we should try to avoid treating them differently."

They experimented by taking pairs of dogs and getting them to present a paw for a reward. On giving this "handshake" the dogs received a piece of food.

One of the dogs was then prompted to shake hands, but received no food. The other dog continued to get the food when it was asked to perform the task.

The dog that was not rewarded quickly stopped doing the task, and showed signs of annoyance or stress when its partner was rewarded.

To prove that the test was really showing the interaction between the dogs rather than just the frustration of not being rewarded, a similar experiment was conducted where the dogs performed the task without the partner. They then continued to present the paw for much longer.

“This shows that it was the presence of the rewarded partner which was the greater influence on their behavior,” said Dr. Range.

"The only difference is one gets food and the other doesn’t, they are responding to being unequally rewarded," she said.

She noted that this kind of behavior, where one animal gets frustrated with what is happening with another, has only been observed in primates before.

But Clive Wynne, an associate professor in the psychology department of the University of Florida, isn’t so sure the experiment measures the animal’s reaction to fairness.

"What it means is individuals are responding negatively to being treated less well," he said.

The team also observed whether the type of reward made a difference. Dogs were given either bread or sausage, but seemed to react equally to either.

"It’s through the fact they have to work for the reward, this confers it with a higher value," she said.

This type of behavior, reacting to others receiving rewards, may represent an earlier stage in the evolution of co-operative behaviors seen in human and primates.

"I think it’s a precursor, simpler than in humans, it’s a selfish behavior, they don’t react to seeing others treated unfairly. With humans they react, say it’s unfair, we can’t see anything like that in the dogs," said Range.

However, other animals need to be studied to really show how animals naturally exhibit jealousies or cooperate, she said.

"I’m sure that it’s not something that evolved with the dogs, we will have to test it in wolves and other cooperating species," she said.

“There is no doubt in my mind that dogs are very, very sensitive to what people are doing and are very smart," said Wynne.