A dog going blind or deaf as it ages is not an unusual occurrence. Ensure that you can meet any financial challenges that occur, especially in the case where a dog may need Cataract surgery, which can be very expensive.  We have 5 simple plans for comprehensive pet insurance coverage, which will give you peace of mind that your pet is covered and lower the possible financial outlay that could occur.  Visit our website at www.genericpet.co.za
Are Deaf Dogs and Blind Dogs just like other Dogs?

www.companionanimalpsychology.com
​(really good articles this site a must read)

Brady, the most wonderful friend and companion - missed unbelievably
This article was sent to me a few year ago when my own dog, Brady went blind and well worth reading. Where Brady was concerned, unless you knew he was blind, nobody was aware of it, both in the home, and out for walks – he learnt to catch his ball (had to aim at his mouth and give a cue at same time), chased the cats, ran and barked at the gate. On walks, would tell him ‘friend’ was coming and you could see all the other senses pick up, he sniffed and smelt with even more vigour than before and very little in his life changed apart from me making sure the furniture was kept in the same place – he even went for his daily swim by himself – although we ensured that somebody was always with him. Great article and if your dog is going blind  or was born blind, don’t despair - teaching basic cue’s and giving them the stimulation they need - can result in a really good quality of life especially if you can bring in clicker training -  I do believe it hurts us more than it hurts them. Enjoy
​​Do dogs that are deaf and/or blind have specific behavioural traits? New research sets out to investigate – and finds they are very similar to dogs with normal hearing and vision.

No one knows exactly how many dogs have hearing or vision problems. Congenital deafness and/or blindness occur in several breeds. In some cases this is related to coat colours – for example the double merle gene in Australian Shepherds is linked to deafness and blindness – and at other times not, as with inherited cataracts in many breeds. Very little is known about how dogs with inherited or acquired vision or hearing disorders behave, which was the motivation for this study by Valeri Farmer-Dougan et al (in press) of Ilinois State University.

The results showed many similarities between dogs with a hearing or vision impairment (HVI) and those without. This shows that HVI dogs can make good family pets. In fact, the non-HVI dogs were rated as more aggressive and more excitable than those with HVI. There were also some differences in specific behaviours: non-HVI dogs were more likely to chase rabbits, and to eat faeces or roll in it, whereas the HVI dogs were more likely to bark too much, lick a lot, or chew unsuitable objects.

The scientists say,
​
“The increased chewing, excessive barking and increased self-licking reported in the HVI dogs may be due to differences in sensory input compared to non-HVI dogs. Indeed, all the excesses in behaviour appear to be self-stimulatory in nature.”

Because they asked owners about any other health issues, they do not think health is the cause of this difference. Instead, they think the dogs are making up for the lack of input from their ears or eyes with behaviours that engage their other senses.

This suggests that owners of dogs with hearing or vision problems should make an explicit effort to make sure their dog has enough sensory input. Farmer-Duggan et al suggest enrichment with toys, including vibrating toys, Kongs, and chew toys, as well as training sessions to engage the dog’s brain. Many such dogs can also attend agility, flyball, obedience or even dog dance classes. 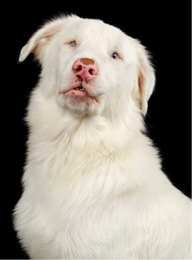 The HVI dogs were more likely to have had formal training, perhaps because their owners thought they would need it more, or perhaps because their owners were more likely to think training is important in general. The lower levels of aggression and excitability in this group could be due to this training, and this is something that future research can investigate.

Owners of HVI dogs made adjustments to their training, for example in using more hand signs and physical prompts for deaf dogs.

The survey was completed by the owners of 461 dogs. The hearing-impaired and vision-impaired dogs (HVI) were considered as one group since there were no differences between them. 98 dogs were deaf or had a hearing impairment, 32 dogs were blind or partially-sighted, and 53 dogs were both deaf and blind (183 dogs in total). The remainder were a comparison group of dogs without such impairments.

The survey asked owners to complete the C-BARQ, a widely-used tool to assess the behavioural traits of dogs. In addition, there were questions about the breed, training methods used, and information about any disabilities the dog had.

There are implications for vets, who should be aware of potential problems with chewing, licking and barking in deaf and/or blind dogs. But the results are also encouraging because they do not support the idea that such dogs exhibit problem behaviours in general.

Blind and deaf dogs are excluded from many rally and obedience programs (with notable exceptions). The authors say, “Given that no evidence was found for increased aggression, it seems that HVI dogs could successfully participate in these additional socialization opportunities. Opening up these opportunities would increase the available activities for HVI dogs. Increased opportunities for training and competition increase the general health and well-being of all dogs.”

The authors conclude that,
“Through cooperative partnerships between veterinarians, behaviorists and owners, HVI dogs can, indeed, be excellent and well-loved companion dogs.”

These results will be especially helpful to owners and potential owners of dogs with hearing or vision impairments. The Canine Inherited Disorders Database has further information on congenital blindness and deafness in dogs.