Please visit and LIKE our Facebook Page and share with family, friends and on your own Facebook page, and ask them to share further – it is only by working together and sharing knowledge and education that we can improve the lives of dogs and assist owners. We do not inundate you with posts – an average of 5 per week, and the odd Did You Know. Thank You!
Dogs vocalization aren’t all bark
By Mark Derr
courtesy of www.resteddoginn.co.za 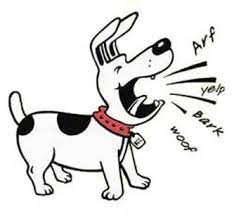 The popular understanding of dog barking is almost like a silly riddle:

Why dogs bark? - Because they can.

But a small band of researchers around the world, trying to separate fact from speculation, are finding that dogs almost always bark for a reason, even if the reason isn’t apparent to humans.

The bark has evolved into a complicated means of communication between dogs and, potentially, between dogs and people, say a group of animal behaviourists, or ethologists, that includes Dorit Feddersen-Petersen at Christian-Albrechts-University in Kiel, Germany.

Most wild canids including wolves, dogs’ nearest relatives bark as a form of close range communication, researchers say. The wolf’s bark one of a number of basic vocal sounds, including hauntingly harmonic howls is short, low-pitched and guff, often described as “noisy” because it lacks harmonic or tonal qualities identified with more musical vocalizations. The bark is usually associated with defence of den or pups, a warning to back off, a protest, threat or an actual attack, Dr. Feddersen-Petersen said in an e-mail interview.

By comparison, dogs are virtuoso barkers, capable of flights of sonic fancy. Dag barks can be noisy, harmonic or a combination of the two, depending on their context and purpose, says Dr. Feddersen-Petersen. Last year in the Archives of Animal Breeding, an international journal, she published the results of a study comparing vocalization in 11 European wolves and 84 dogs from nine breeds, including poodles, Weimaraners, American Staffordshire terriers, German shepherds, Alaskan malamutes, bull terriers and Kleiner Muensterlaenders.

The results, she reported, graphically portray how different barks express different emotions, including loneliness, fear, distress, stress and pleasure, as well as a need for care among puppies and serve to alert other dogs, people or animals to changing external circumstances. “This work on barking is extremely careful and extremely important because it calls attention to complex social life of dogs that we have barely begun to comprehend,” says Marc Bekoff, an ethologist at the University of Colorado who studies canids and cognition in animals.

Noisy barks, Dr. Feddersen-Petersen explains relate to “defensive and offensive threats, social insecurity, physical distress.” Harmonic barks, however, are used as a signal for social play, in activity and passive submission to another dog or person and when making social contact.

Dr. Feddersen-Petersen made recordings for her work while the dogs were engaged in normal behaviour, so she was able over repeated sessions to observe how dogs were barking in specific situations. After a while, she says, she began to be able to tell what a dog was doing by its bark.

Dr. Feddersen-Petersen also recorded mixed play barking among German shepherds, poodles and Weimaraners that had noisy and harmonic components, and a “noisy play bark” among American Staffordshire terriers and bull terriers that indicated a turn on the part of the dogs from play to more aggressive behaviour.

Like many canid vocalizations, these barks are often associated with physical cues, like a wrinkling of the brow, staring, raised hackles, pinned-back ears, an upright or lowered tail and other submissive or threatening postures, Dr. Feddersen-Petersen says. But, she notes, in a wide range of breeds physical expression is limited because of the lack of a tail, floppy ears and other physical characteristics.

A few breeds, like the poodles and the American Staffordshire terrier, appear limited in their vocal repertory, she added, although none as severely as the barkless Basenji. In fact, Dr. Feddersen-Petersen recorded as many as a dozen variations of some types of barking among several of the breeds she tested, including the German shepherd and Alaskan Malamute. She says the often-subtle variations corresponding to “dialects” and were used by dog’s identical situations at different times, for reasons not yet clear.

Working independently, Karen Overall, director of the behaviour clinic at the University Of Pennsylvania School Of Veterinary Medicine, and her collaborators, Arthur Dunham, an evolutionary biologist at the University of Pennsylvania, and Dr. Leslie Augulnick, a veterinarian in private practice, examined the barks of 30 dogs to determine whether there were identifiable sonic differences between the bark of a stressed or distressed dog, as seen when one is left at home all day and suffering separation anxiety, and an unstressed dog wanting, for example, to go out.

The researchers, whose results are under review for publication, say they found distinctive differences. The bark of a stressed dog is high-pitched, atonal and repetitive. Dr. Overall says, while those of unstressed dogs are more harmonic. The findings, which appear to agree with those of Dr. Freddersen-Petersen, have obvious value to animal behaviourists trying to determine whether a tireless barker is responding to some external event or expressing its feelings on being left at home alone.

“The single biggest underappreciated part of dog behaviour that much of what dogs do is about soliciting information,” Dr. Overall says, “they want confirmation of what is happening or want to test a hypothesis. Barking is a means of doing that.”

Dr. Feddersen-Petersen speculated that during domestication, dogs “evolve new sound units. Their vocal communication got much more important for conflict solving, establishing a social state and other demands of social life”.

Discovering why and how that happened and examining the differences in barking between breeds and between individual dogs are among the issue researchers must still address. Another, Dr. Fedderen-Petersen says, involves studying the degree to which dogs and people understand those barks.

Dr. Overall says researchers also needed to study the apparent capacity of dogs to apply barks to different contexts and objects. For example, she says, her Australian shepherd, Flash, has a separate bark for each species that visits the back yard fox, deer, woodchuck and the neighbor’s cat.

Michael W. Fox, a bioethicist with the Humane Society of the United States who has conducted studies of Dog and wild canid vocalizations, says free-ranging dogs he has studied on a wildlife preserve in southern India have separate barks for elephants, humans, monkeys, other dogs and strange cats.

Dr. Feddersen-Petersen agrees that dogs are capable of such feats and more. “Dogs call individual dogs with individual barks,” she says, “there are many interesting facts ‘sleeping’ in our ‘dogs’ vocalizations.”