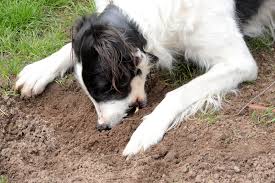 There may be several reasons why your dog is eating dirt. Pica  is referred to as the consumption of non-food objects. When consuming only dirt (earth, soil, or clay), the condition is known as geophagia. Typically, dogs, especially young dogs and puppies, tend to do a lot of exploration within their environment. This, unfortunately, can result in the eating of items that are not quite understood by owners, such as the eating of dirt. Dirt can include soil when they are outside, especially when they are kept outdoors for long periods of time. Dirt can also include indoor potted plants, and even sand. This condition can be a mild to moderate behavioral disorder or a more moderate to severe disorder in terms of dietary insufficiency. If your dog is eating dirt on a consistent basis, contact your veterinarian for an appointment.

While seemingly confusing to many owners, your dog may be eating dirt for a few reasons.
Reasons for eating dirt may include:

Why Eating Dirt Occurs in Dogs

There are several different reasons why your dog may partake in the consumption of dirt. Fortunately, many of these reasons can be effectively treated by your veterinarian. The conditions which cause this habit may include:

Perhaps your dog is spending too much time outside without any stimulation, and that is what could cause him to want to dig and eat the dirt. Dogs that are bored tend to show odd behaviors, but to them, it is just something to do to pass the time.

Believe it or not, some dogs enjoy the taste of dirt. This may be for the same reasons as some that enjoy the taste of cat droppings in the litter box.  Your dog may be eating dirt because he has been accustomed to the taste since he was a puppy, a time in his life in which he used his mouth and tongue to explore his surroundings.

As a result of the deficiency of healthy red blood cells, your dog could be eating dirt to recover any deficiencies in the blood. Your dog could also be eating dirt due to dietary and mineral abnormalities.  Gastric Upset Indigestion or a sour stomach can occur in dogs, and some dogs actually find dirt soothing to the stomach. This natural remedy may act as a scrubbing agent for the stomach and intestines. The dog may be looking for something to help make digestion a little easier.

What to do if your Dog is Eating Dirt

If you witness your dog eating dirt or if he comes inside with dirt on his face and mouth, take some time the next time he goes outside to see if you can observe his behavior. If you notice he is eating dirt often, make an appointment with your veterinarian to get him checked out for any medical issues.

Once you arrive at the veterinarian, your veterinarian will want to know more about his dirt-eating habit. He will ask questions about his diet, home-life, lifestyle, how long he is outside at a time,  and other questions to gather more information.

He may then decide to perform a biochemistry profile to check his organs, blood testing, and a urinalysis. These tests will tell the veterinarian if your dog is suffering from a deficiency or anemia. The urine test will also check for sediment or stones that may be formed from the ingestion of dirt or sand.

In order to prevent your dog from eating dirt, and if this behavior is not because of a health issue, you will need to take certain steps to make this behavior stop. This will take some time and energy from you; however, it may be worth it if you want the dirt eating to end. Supervision is the key to stopping your dog from eating dirt. You will need to go outside with him every time he goes out. If you have a fenced in yard and typically allow him to go out without a leash, it will be crucial to monitor him. As soon as you see him begin to eat dirt, you will need to immediately distract him. You can use a verbal command, a loud noise or the clapping of your hands to divert his attention. You can have play toys outside to play with him so he can get some energy out of his system and prevent boredom.

If this method does not seem to help, and if your dog continues to want to try to eat dirt, you may need to put him on a leash and take him out that way. Having your dog on a leash will help you pull him away from any dirt he is starting to eat. It is very important that you use a harness rather than a traditional dog collar for this, because a harness allows you to safely pull him away rather than choking him or damaging his trachea in the process.