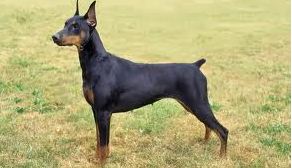 This is a breed of relatively recent origin. It was developed in Germany in the 1860s by a German tax collector named Karl Friedrich Louis Dobermann. Dobermann had to travel frequently through bandit-infested areas, and decided to develop a watchdog and bodyguard capable of handling any situation that might arise. He ran the Apolda dog pound and thus had access to dogs of many breeds, presumably he crossed the old Shorthaired Shepherds, German Pinschers, Rottweilers, Beaucerons, Manchester Terriers and Greyhounds. Later, Otto Goeller and Philip Gruening continued to develop the breed to the dog that is seen today. After Dobermann's death in 1894, the Germans named the breed Doberman-pinscher in his honour.

Doberman Pinschers are medium-large size dogs with a square, compact, athletic build and a short coat that comes in black, black with tan, blue-gray, red, fawn and white.

Doberman Pinschers are often stereotyped as being ferocious and aggressive. As a personal protection dog, the Doberman was originally bred for these traits - it had to be large and intimidating, fearless, and willing to defend its owner, but sufficiently obedient and restrained to only do so on command. These traits served the dog well in its role as a personal defence dog, police dog, or war dog, but were not ideally adapted to a companionship role. The Doberman Pinscher's aggression has been toned down by modern breeders over the years, and today's Dobermans are known for a much more even and good natured temperament, extreme loyalty, high intelligence, lots of energy and suitability for companionship and family life. They are loving, affectionate and dedicated to their families. Determined, bold and assertive while working, they are very adaptable, highly skilled and versatile

They are not recommended for apartment life, they are quite energetic and require a reasonable size yard. They are also very sensitive to cold weather (due to their short coats) and are thus best suited to live indoors.

Dobermans, while loving to their families, can be very protective and suspicious of strangers, and are therefore considered to be excellent guard dogs as well as watch dogs. If they think their handler is being threatened, they will do anything to keep them out of harm’s way. They are, however, very unlikely to show aggression toward their owners. They like to be with their owners and are not suited to kennel or backyard life - they are people-oriented and crave attention, positive reinforcement and quality time with their family. However; this breed is not for everyone, they needs an owner who is firm, confident and consistent with setting rules and sticking to them. If they are allowed to have their own way for too long they can become stubborn and wilful.

Although they have a reputation of being a very aggressive, this is just not the case. In fact they make great therapy dogs, they are sweet and gentle with nursing-home patients - tippy-toeing over IV tubing and walking at the resident's speed (which can be very slow), while at the same time will fiercely defend their masters if it becomes necessary. Issues arise when they are not socialized and trained properly or have an owner who does not display the proper leadership and/or does not provide enough exercise.

These dogs are very energetic with great stamina and need a lot of exercise, daily walks or jogs will not be sufficient. A good solution to this is to put yourself on wheels, take them for a run on a bicycle or roller-blades - this will allow you to keep up with their pace, and if a chest harness is used you can allow them to pull you. They also enjoy to run in a large open area and love to play games like fetch a ball or catch a frisbee. Another way to exercise them both physically as well as mentally is to take part in dog sports such as flyball, obedience and agility. If the Doberman does not get enough physical and mental exercise they can develop behavioural problems like digging or chewing up your furniture.

In a nutshell, a Doberman Pinscher is for you is you:

Which other breeds are most compatible with the Doberman Pinscher?

If well socialized they will get along with any other breed of dog.

A good choice however will be another larger dog so they can play together without worrying that the one will get hurt, a larger active dog will be perfect like a Labrador, Golden Retriever, Setter, Pointer, Spaniel, etc.

With proper socialization and training they can do very well with other dogs and even non-canine pets.

If raised with and/or well socialized and trained they can do very well with children, however they are not recommended for families with small children. Dobermans are naturally very playful and rambunctious, especially when young, and they can easily knock over or hurt a small child. They are also very protective and may be confused when your children's friends come over and engages in innocent but rough play - they may attack your children's friends if they perceive that the child is in danger, even if he really isn't. Finally, Dobermans may feel overwhelmed by the noise and quick movement of small children, which could result in a shy or stressed dog.

Dobermans are highly intelligent and very easy to train, they learn new commands quickly and thrive at obedience training. However, you will get nowhere with harsh training techniques. They need an owner who is firm, confident, consistent and uses non violent, reward based training methods.

They have relatively maintenance free coat, it is short, barely sheds, easy to wash and dries quickly. They only need to be brushed occasionally or rubbed with a damp chamois about once a week to keep the coat gleaming, bath them only when necessary - regular bathing can strip their natural oils causing the skin to dry out.

Common health problems that this breed is prone to include: “In today’s age, with the rising cost of veterinary care, it really is a wise decision to consider medical insurance for your pets. Depending on the plan you choose, you can ensure that if your pet does develop one of the health issues the breed is prone too, that you will be covered –additionally, just knowing that any accident your pet may have will be covered, will out-weigh the monthly insurance fee for most pet owners. Our own personal choice is Genricpet as they have a ‘no limit’ policy and their rates are comparable to the rest of the industry. To find out the questions and things to look for in a Medical Insurance, please just follow this link”
​
Life expectancy