Please visit and LIKE our Facebook Page and share with family, friends and on your own Facebook page, and ask them to share further – it is only by working together and sharing knowledge and education that we can improve the lives of dogs and assist owners. We do not inundate you with posts – an average of 5 per week, and the odd Did You Know. Thank You!
Difference between Behaviour Modification and Behaviour Suppression

www.fairviewbehavior.com Situated in the DFW area in North Texas and giving out sound advice 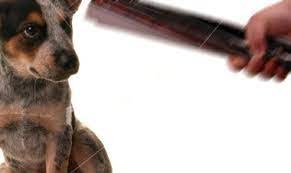 Dog being smacked with newspaper for misbehaving
If I could only teach pet-owners one thing it would be the difference between behavior suppression and behavior modification. The former gives the impression that behavior has improved despite the fact that all the original underlying motivations remain. The latter refers to the process of actually helping a pet learn new responses to a stimulus by developing new reactions and changing any underlying negative emotions.

This may seem like a subtle difference, but on closer inspection it is the difference between slapping a coat of paint on a crumbling foundation versus actually calling an engineer to repair the root cause of the issue and re-level the home.

Response suppression results when an animal experiences repeated punitive actions for any infraction with little to no guidance on developing alternate behavior patterns. For example, dogs have a large number of behaviors that they tend to engage in prior to actually biting or attempting to fight with another animal or person. These behaviors can include whining, looking away, growling, or ultimately biting. Response suppression training focuses on punishing these signaling behaviors with the expectation that the dog will not escalate. If the dog whines, shock him; if the dog lunges away from you, pop the choke chain/prong collar; if the dog growls, flip him and pin him on his back.

In all of these scenarios, the dog is giving signs asking for space. Instead he is met with either pain from shock or collar pops or engaged in a full attack (flip and pin) from his handler/care-taker. When faced with the same scenario at a future time, the dog will refrain from engaging in these behaviors, but will instead “build-up” a much larger reaction to use at a later time. A stimulus that made your dog feel unsure enough to provide a spacing request resulted in an exaggerated negative response. The next exposure will, without a doubt, cause the dog to feel greater fear internally while keeping him from engaging in any of the warning signs that resulted in the extreme punishment. The signaling behavior will be suppressed giving the owner the false belief that the dog is now ‘fine’ with the situation.

With the warning signs removed it may seem like your dog has improved – for example, he may no longer bark at strangers visiting your home. He is also no longer giving you clear signals that he is uncomfortable. Usually, dogs that have gone through this type of training will (and do) eventually bite someone. Since the warning signs are now gone, but the underlying fear remains, it doesn’t take much to cause the dog to cross a threshold and just bite to make the scary thing go away. With all the warning signs suppressed it can seem like the dog bit “out of the blue”. In reality, your dog never had the opportunity to learn a new response; he was just punished for having the response he had. He learned to suppress his outward behavior, but no one helped him with the actual cause of those behaviors.

Response modification training takes into account any underlying emotional reactivity that may be driving the undesired outward expression. This type of training is focused on rewarding acceptable alternatives while helping to develop more positive feelings and associations with stimuli that may cause fear or anxiety. This may mean taking things very slowly and methodically to ensure that your dog has the opportunity to experience things without any spike in fear or anxiety. The dog will be rewarded for maintaining composure or opting to move away, rather than towards, the evoking stimulus. If your dog whines, movement stops until your dog settles then he is given the space he wants. If your dog attempts to lunge, he will be walked with a harness that allows the owner to prevent bolting while maintaining control of the dog’s position. Once the dog is calm, he can move away from the stimulus. If the dog growls, the trainer attempts to determine when/how the dog was pushed too fast. In all of these situations, the dog is offered a primary reinforce (e.g., food) to help create a positive emotional reaction to the currently scary stimulus. The dog is then given the ability to control the interaction by having the provoking stimulus removed if/when the dog settles. His continued calm or appropriate behavior will result in the desired effect while the trainer also actively works to decrease the negative associations your dog may have with the stimulus.

Eventually the dog will learn that remaining calm and focusing on the handler will result in the dog being moved away from the previously fearful stimulus. Repeated pairings of food with the instigating item will also cause your dog to develop a positive emotional state during future pairings. It is this change in emotional state that really creates the improved behavior in the long run. When the dog stops lunging, barking, snapping, etc. it is because he is no longer reacting to the stimulus and he has learned that his calm controlled behavior is what allows him to have the space he needs.

These dogs have been directed and rewarded for their desired behavior. They have also had the opportunity to learn that the stimulus is not scary. This reduces the dog’s internal level of anxiety/fear. These dogs are still willing and able to offer warning signals when appropriate – these signals have not been eliminated from their repertoire.   Instead, the underlying negative emotional state has been changed while the dog has been rewarded for appropriate behavior while completely ignoring the undesired behavior.