Dachshunds - The Good and the Bad

www.yourpurebredpuppy.com - great website to find out all about the different breeds - enjoy!​ 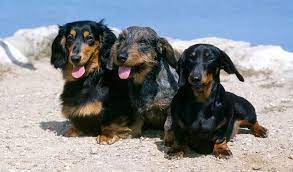 Dachshunds come in an impressive variety of sizes, coats, and colors.

There are Standard Dachshunds (the largest) and Miniature Dachshunds and even "Tweener" Dachshunds (a non-official term for individuals who fit between Standards and Minis.

There are Shorthaired (Smooth), Longhaired, and Wirehaired Dachshunds. The most common colors are reddish brown, or black with a few tan markings, but many colors and patterns are possible.

Curious, lively, charming, and brave, the Dachshund is similar to a terrier in his demands to be in on everything.

This comical clown loves to play games and has a great sense of humor. He is a loyal little dog, very attached to his family, and he firmly believes that sleeping under the bedcovers is in the Dachshund Bill of Rights.

Dachshunds attract devoted followers who would never consider having any other breed. Indeed, Dachshunds are often kept in pairs, which is A-OK with them, since they seem to recognize and prefer being with other "wiener dogs".

They're usually good with other family pets, too, though they can be jealous when they want attention and they can be possessive of their toys. You need to put a firm stop to the first signs of jealousy or possessiveness so that these don't become bad habits.

Though the Dachshund makes a great house dog, he does need his daily walks (on-leash! Dachshunds are chasers who will take off! -- and plenty of companionship. Loneliness will lead to excessive barking.

You'll also hear his sharp, persistent bark when people approach, for most Dachshunds are alert watchdogs who do not take kindly to strangers intruding on their domain. Again, you need to put a stop to overt signs of suspiciousness, lest this progress to nastiness.

Though bright and clever, Dachshunds like to do things their own way. In other words, they're stubborn. Cheerful praise and treats should be offered freely, as Dachsies are proud little dogs who resist force. They become irritable when pushed too far, and they may respond defensively (growling or snapping) if jerked around, handled harshly, or teased.

Other behavioral problems? Well, the Dachshund's hunting and tunneling instincts may lead to holes being dug in your garden. Also, housebreaking may go slowly, as many Dachshunds don't like to go outside in cold or wet weather. A covered potty yard is recommended, if possible.
In general, Miniature Dachshunds are more active than the larger Standard Dachshunds. Comparing the three coat varieties: But remember, these are just generalities!

If you want a dog who...A Dachshund may be right for you.

A Dachshund may not be right for you.

More traits and characteristics of Dachshunds

If I was considering a Dachshund, I would be most concerned about...